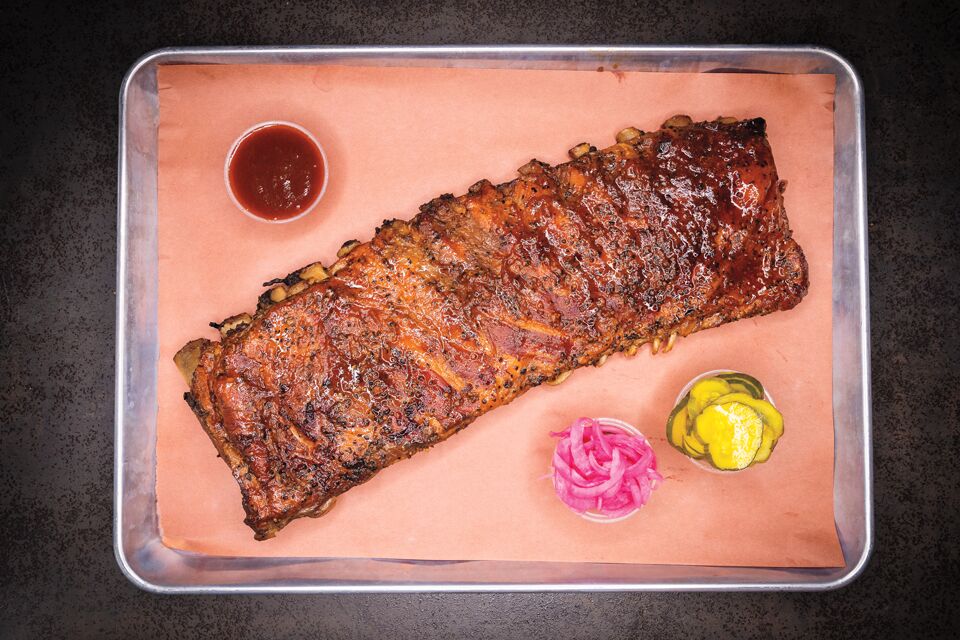 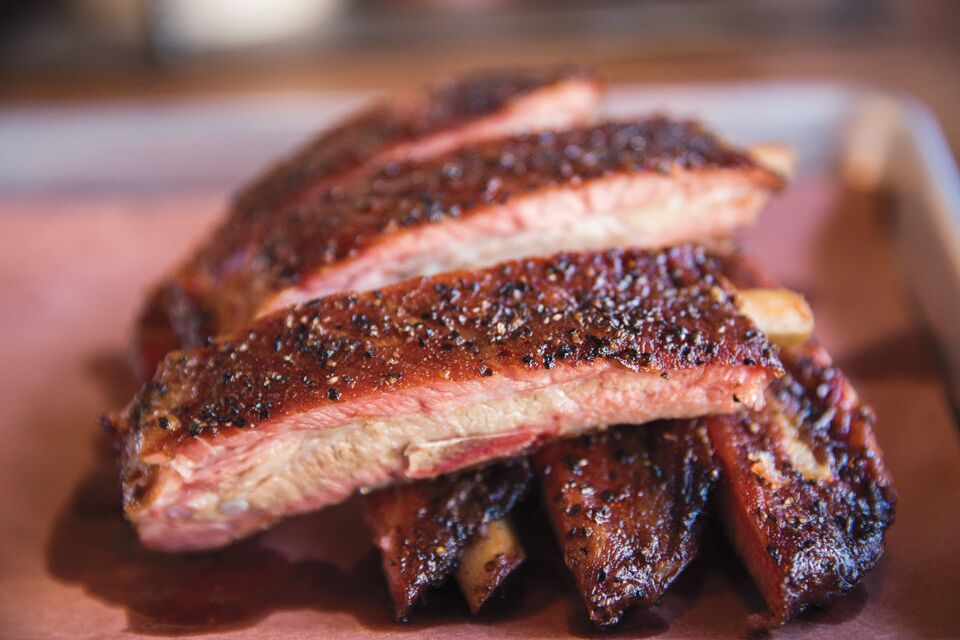 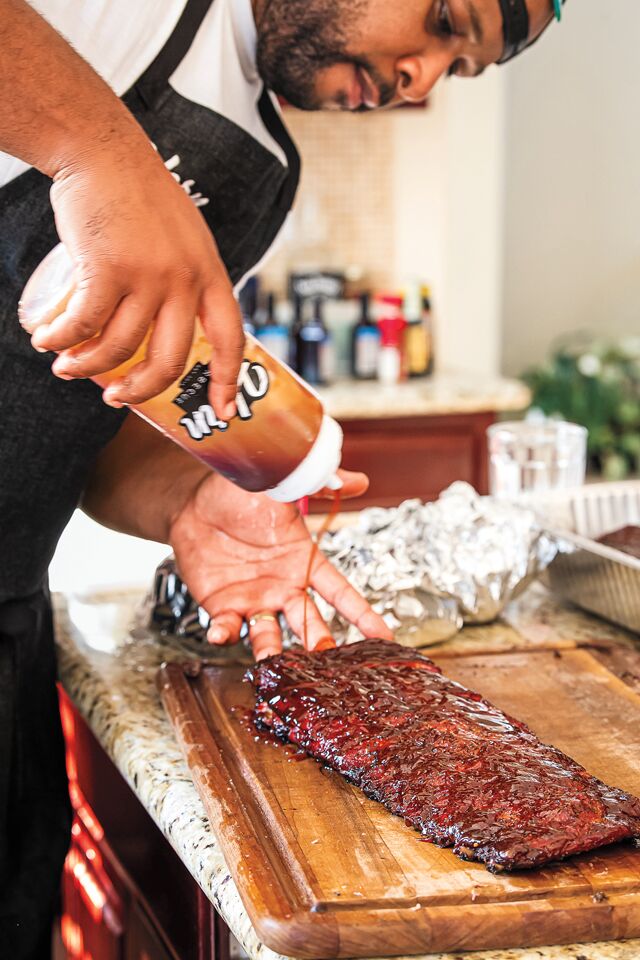 It begins in a backyard, with charcoal, a grill, and some burgers.  For most of us, it doesn’t go much further, but for Daniel Frengs,  Brendan Harrigan, and Matt Horn, grilling became more than a  hobby—it became an obsession and a profession.

Now, they’re happy to share a few secrets that just might help us make our backyard barbecues better than ever.

Daniel Frengs, Slow Hand BBQ: “I didn’t know anything,” says  Daniel Frengs, but he loved to barbecue in the backyard. One day,  a friend asked him to work the coals for a party, and soon Frengs was being asked to cater for other friends.

“It was only going to be a part-time business,” he says, “but the day before my first farmers market in Brentwood, I got laid off.”

From there, it was trial, error, and hard work. “You cook a million briskets,” he says, “and after a while you settle on how to do it.”

Frengs built on his farmers market success by doing informal  pop-ups and then finally took the plunge into brick and mortar. Now there are Slow Hands in Martinez and Pleasant Hill, but Frengs doesn’t focus on profit and loss. “When you have a bunch of people at the table and no one’s talking,” he says, “that’s success.”

Brendan Harrigan, Hazy Barbecue: Brendan Harrigan and his brother, Sean, grew up in Danville, living the good suburban life  with plenty of backyard barbecues. “We were always cooking burgers and ribs,” Harrigan says—and with 22 first cousins in the family, there were plenty of opportunities to refine their technique.

After graduating from Cal, each got a corporate job, but they  always talked about starting something together. “One thing we knew Danville was missing was barbecue,” says Harrigan, and thus Hazy Barbecue was born.

Still, there was learning to do. “I spent a lot of nights watching my brisket cook,” says Harrigan. “And it’s still a learning curve.”

But so far, so good for Hazy, which opened last December, and the brothers are happy to be back in Danville doing something they’ve dreamed of.

“We just weren’t that passionate about founding an accounting firm,” Harrigan adds.

Matt Horn, Horn Barbecue: Like each of the pitmasters, Matt Horn didn’t set out to become a chef. He grew up in Fresno, not Texas; played college football in Los Angeles, not South Carolina; and worked in retail in Southern California, not Kansas City.

“I started with spareribs in my grandmother’s backyard,”  he says, and soon he became obsessed with barbecue. Working without preconceptions, he developed a unique style that has drawn devoted fans from all over the country to his celebrated Oakland restaurant.

Critics may rave, but the true test is customers—and Horn Barbecue is so popular that long lines are the rule, not the exception. Those fans, and Horn, are drawn to the most basic way to make meat taste great. “I love cooking with fire,” he says. “It’s primal.”

Charcoal vs. propane: All three agree it’s charcoal for flavor, propane for convenience.

Offset vs. direct: Offset, or indirect, heat puts all the coals  in half of the barbecue, leaving the other side away from the direct heat.

Meat thermometer vs. feel: Meat thermometers can help, but you should try to get a sense, through sight or touch, for when the meat is cooked how you like it best.

Perfect patties: Burgers will hold together better if cooked over an offset bed of coals—but if you’re using direct heat, try putting the meat in a ziplock bag before giving the patties their final shape.

Temperature tips: Cold and wind (regardless of the temperature) will lead to a longer cooking time. And some charcoals (mesquite, for example) burn hotter than others.

There’s nothing like a burger hot off the grill on a summer evening. And as every griller knows, the difference between a “burger” and a “good burger” can be pretty substantial. Sometimes the patties fall apart on the bun; sometimes the outside is black and the inside is raw; and sometimes the whole thing is as dry as the Mount Diablo hills.

“It’s all about heat management,” says Frengs. “Burgers fall apart because they get too hot.”

Frengs strongly recommends cooking burgers over an offset fire, but he warns that it will take significantly longer to get them ready.

Horn notes that, regardless of method, grillers should avoid smashing the burgers down on the grate. “They lose their integrity that way,” he says.

Final touch: Make sure the buns are warm. Brush them with  butter and stick them in a 250°F oven for five minutes.

As always, dealing with the heat of the fire is the key. Cooking  hot dogs and sausages directly over the coals generally leads to  blackened skin and lukewarm centers.

Frengs once again advises using indirect heat and then giving  the dogs just a few seconds right over the coals to get a few grill marks. Harrigan has no problem with putting the dogs in a microwave followed by a little time on the coals. “I love that sear,” he says, a feeling Horn echoes. And again, warm up those buns.

First, start with the right cut of meat. “Rib eyes are the go-to,” says Horn, and Harrigan agrees: “I love having the bone,” he enthuses. “It adds to the flavor.”

All three agree that steaks should not be flipped much, and Horn emphasizes that resting the meat for 10 to 15 minutes after it comes off the grill is crucial.

The best ribs are cooked low and slow, and there’s really no way around it.

You can speed things up just a little, Horn and Harrigan say, by pulling the ribs off the grill after a couple hours, brushing them with sauce, wrapping them in foil, and sticking them in the oven for one hour at 250°F or so. The foil wrap and sauce combine to cook the ribs faster without drying them out.

As for boiling the ribs first, all three experts agree: Don’t. Boiling renders the fat and leads to flavorless meat that tastes just like the sauce and only the sauce.

But in the end, great ribs take time. “There are really no shortcuts,” concludes Frengs. “You have to cook them low and slow.”