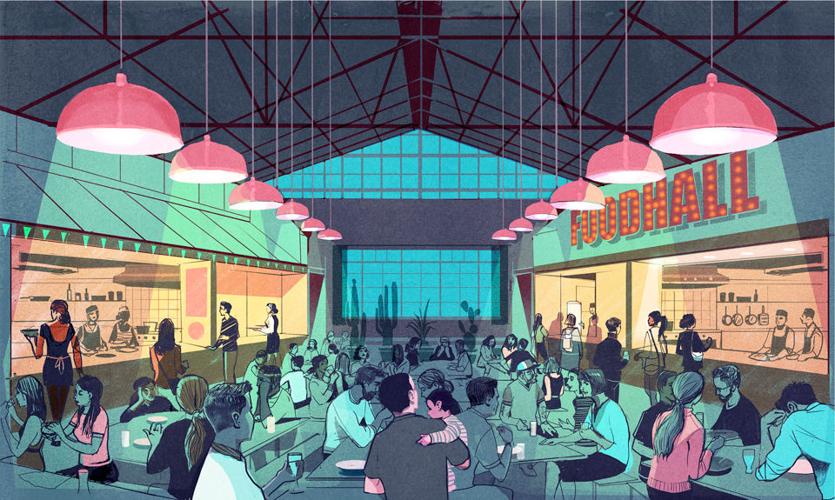 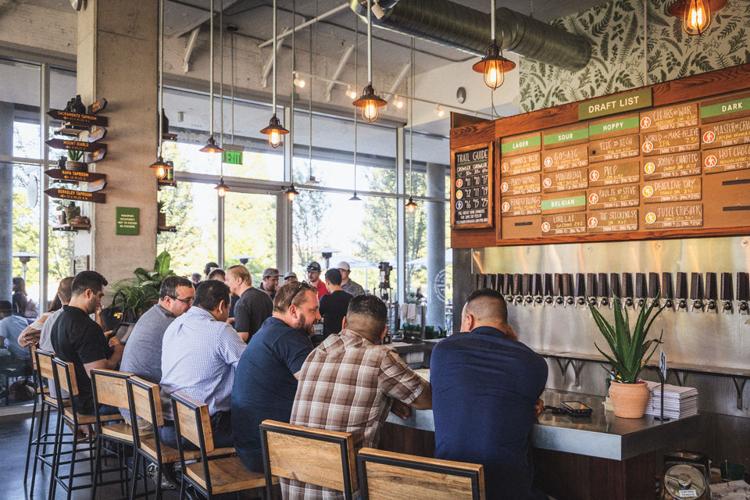 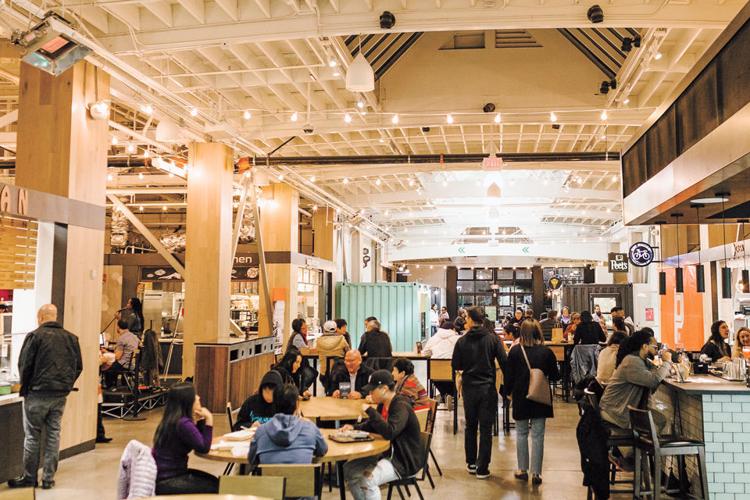 When Castro Valley celebrated the grand opening of Daughtrey’s Department Store in its new, larger location, the store was "one of a dying breed of retail establishments, where an established sales staff knew the names of customers and kept up with their families’ needs as they grew through the years," according to the book Castro Valley by Lucille Lorge, Robert Phelps, and Devon Weston.

It was 1965 and the Four Tops, Rolling Stones, and Temptations had songs topping the Billboard music chart.

But in the early 1990s, Daughtrey’s was sold to another department-store chain that quickly went out of business. After a long vacancy, the building is now reopening as Castro Valley Marketplace, a three-story food hall and retail complex set to debut in January.

"As we transform this building from department store to a department store of food, it’s going to be the heartbeat [and] center of the community," says Craig Semmelmeyer, founder and principal of Main Street Property Services, whose past projects include the Marketplace in San Ramon, and the Shops at Todos Santos Plaza in Concord.

Malls and shopping centers of years past were anchored by retail giants like Macy’s, Sears, or even Daughtrey’s, with fast, convenient food chains springing up in the department stores’ shadows to refuel shoppers. Not so anymore, as digital conveniences like Amazon allow consumers to run their errands without leaving home.

In the last decade, the explosion of e-commerce has coupled with a growing foodie culture and a yearning for community interaction as an antidote to virtual social lives, longer workdays, and telecommuting. The result: People are turning to food as a centerpiece for social gathering—whether it’s events like the Asian-inspired night markets in Pleasanton and Berkeley, reincarnated food courts like the one at the Veranda in Concord, or food halls such as the Foundry, a two-story, 25,000-square-foot dining and community space coming to Walnut Creek.

"In our social media–based society, people still crave connection beyond their screens, and a food hall fills this need by creating a community-driven gathering space built around the celebration of food," says Brian Hirahara, owner of BH Development, which is responsible for Walnut Creek hot spots including Telefèric Barcelona, Va de Vi, and now the Foundry.

The trend has gained so much steam that 2019 was dubbed the Year of the Food Hall in the United States by property-development leader Gotham Organization, with the number of food halls nationwide on pace to nearly quadruple from 120 in 2016 to 450 by the end of next year.

Whereas the Foundry will create what Hirahara calls "a community family room" in the city’s already bustling downtown, in cities like Castro Valley and San Ramon developers are tasked with creating a central gathering space where a downtown is lacking or nonexistent. This was both a challenge and an opportunity for City Center Bishop Ranch developer Alex Mehran Jr., president and chief operating officer of Sunset Development Company.

The center wraps around a sunny square with a shaded lawn, where visitors recline on lounge chairs and groups of friends gather on cushioned benches while playing Jenga with brick-size wooden blocks.

"This is a place that you’re not just going to go to buy something," Mehran says. "This is your place that you can go and hang out, and if all you’re going to do is sit on the lawn or buy a coffee, that’s fine, but feel welcome."

In the evenings, workers from the hundreds of companies at Bishop Ranch business park walk the block to City Center to gather at happy hour, mimicking the convenience of urban living. In fact, the rise of corporate campuses and mixed-use developments has contributed to the explosion of these food-oriented communal spaces in suburban areas.

Once bedroom communities, cities like San Ramon increasingly offer residents the chance to work where they live—and City Center wants to serve as their leisure space.

"We’re trying to provide those opportunities for interaction, for quality [time], for enjoyment, and bring people closer to their families and closer to opportunities to have genuine interactions with people that are more common in the city," says Mehran.

That’s the approach of Gunjan Madan, the charismatic owner of Social-Affair, a wine and chai lounge at City Center. Madan designed the space, full of plush seating in rich tones and textures arranged to create "conversation corners." She was inspired to open the lounge because she loves hosting people at her house for rounds of chai.

"This is my home, and this was my vision," Madan says. "I thought, I’m just extending what I do at home to everyone."

As eating and drinking become primary social events in this culture, dining is now more experiential—from aesthetically creative spaces to themed tastings, board games that double as centerpieces, and access to chefs and restaurateurs.

Off the Grid’s vice president of operations, David McIntyre, says that’s a big part of the appeal for visitors at the brand’s mobile food events that pop up every day at rotating locations around the Bay Area.

"It’s not just the customers meeting one another but that interaction with all these small food producers that’s really great," he says. "It’s a way to support those small local businesses, to keep that money in town, and support people in their dreams."

From food trucks to food-hall stalls, today’s entrepreneurs have a more accessible point of entry than opening a full-size restaurant under the pressure of high rents, increased minimum wage, and tough competition.

At the Castro Valley Marketplace, food vendors can rent not only stalls but also three commercial kitchens that are reserved by the hour for food prep, cooking classes, or other events. Semmelmeyer describes it as a coworking space for food, which brings collaboration opportunities.

"Environments where entrepreneurs can share are where ingenuity [and] next developments come from," he says. "It doesn’t come in a vacuum. It comes in that shared space."

It wasn’t long ago that the dining options at large public gathering spaces like malls and airports were mostly cheap fast–food chains. Not so anymore, as the demand for healthier, better quality, and locally owned eats has spread beyond urban centers. Here are some examples:

Anchor eats: San Francisco chef Charles Phan’s the Slanted Door was perhaps the most anticipated restaurant opening in the Tri-Valley in a decade.

Home to the most East Bay malls, Concord had never seen anything quite like this splashy shopping center, which opened in 2017 with a mix of upscale retail, a cutting-edge movie house, and high-end dining and drinking.

Coming soon: Brazilian steak house Texas de Brazil brings a bounty of grilled meat, while Doppio Zero dishes Neapolitan pizza and Italian fare, which will be familiar to those who have eaten at the San Francisco, Cupertino, and Mountain View locations.

Following the lead of SFO, OAK will upgrade its offerings next year by adding 17 food and drink spots.

Anchor eats: A food hall dubbed the Hangar will include branches of Drake’s Brewing and Red Bay Coffee, as well as Brown Sugar Kitchen Counter.

Local: Oakland hot spots opening new airport hubs include Calavera, Cosecha, Luka’s Taproom, Southie, and Tay Ho. A16 and District, based in San Francisco but with locations in Oakland, are also planned.

Coming soon: Airport officials hope to have all 17 businesses up and running by late 2020.

Popping up across the nation, food halls bursting with a wide variety of oft-local eating and drinking options are drawing crowds. Here’s a roundup of new and in-the-works East Bay food halls.

Anchor tenant: Paradita Eatery and Super Duper Burgers occupy the market’s largest stalls, which open out to the street as well as into the interior of the food hall.

Drinks: Night Owl, a restaurant and craft cocktail lounge from the owners of Oakland’s Gogi Time and Blind Tiger, and AKA Coffee.

Bonus: The marketplace will include Pop Out Kitchen, a commercial kitchen and event room, and Lab 200, a coworking space.

Eats: Among the food and drink stalls are concepts from Juhu Beach Club’s Preeti Mistry, Reem Assil, Matt Horn, and permanent locations for the acclaimed pop-ups Okkon and Lovely’s.

Drinks: There will be a U-shaped bar with a stage for live music. Also planned: a local winery blending wines and adult slushies sold out of a vintage bread truck.