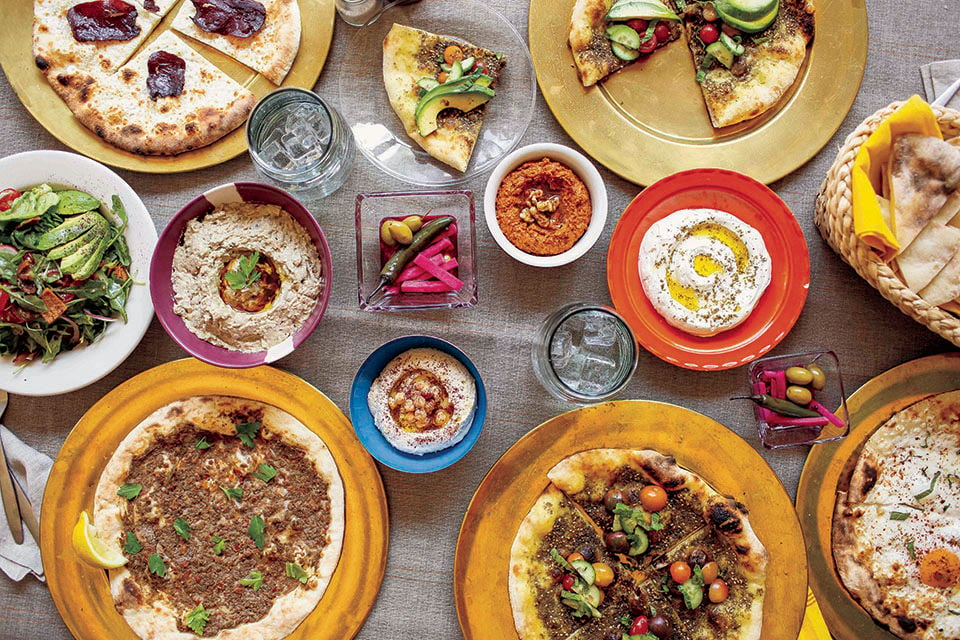 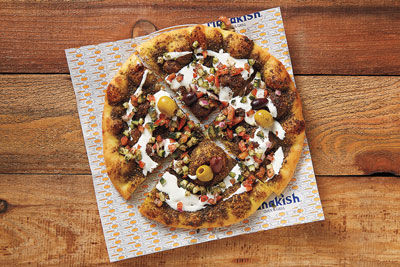 The za'atar and whipped labneh flatbread at Manakish Oven and Grill is topped with olives and Greek pico de gallo. Photo by Ron Essex. 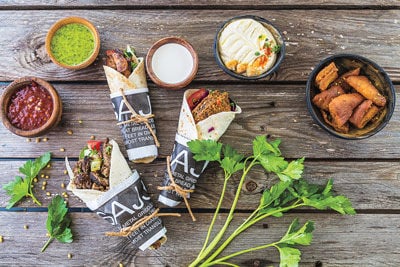 As you bite through the crispy coating of the falafel—the spices melding intricately, and the smooth chickpea paste tickling your taste buds with its mixture of onions, garlic, and Middle Eastern flavors—take a moment to thank Osman, a 13th-century chieftain.

OK, the thought of mounted marauders rampaging through what is now modern Turkey probably won’t distract you from the deliciousness of the falafel and pita bread, but really, Osman and the Ottoman Empire he founded are the basis of what we today call Mediterranean cuisine. "When the empire collapsed [after World War I], each region took that food and modified it," explains Zaid Ayoub, the owner of the Sajj Mediterranean restaurants that dot the Bay Area.

One of the most overlooked epicenters of the cuisine was a region known as the Levant—encompassing present-day Syria, Jordan, Israel, Lebanon, and Palestine—which has sparked new interest in the eastern end of the Mediterranean flavor profile.

For example, Lamees Dahbour, the chef and owner of the highly rated Mama Lamees in Public Market Emeryville, draws on her Palestinian background for her recipes. ("My food is from my mom and my culture," she says.) Meanwhile, Jordanian street food is the inspiration for Ayoub’s menu.

Although aficionados may be able to tell the difference between the various regional cuisines, for most of us, it doesn’t really matter. The subtly spiced dishes at these restaurants don’t overwhelm with heat. Rather, they focus on ingredients that mesh with pita and manakish (a flatbread that can be topped like a pizza or served as a wrap), such as hummus and other flavorful dips that draw on olives, sesame, and various eastern Mediterranean staples.

As always, the best way to experience food of any kind is to dive in. What follows are five restaurants that can help introduce you to a cuisine that has ruled for more than 600 years.

Tucked away in a corner of the fantastic Public Market Emeryville, Mama Lamees is a counter-service eatery with a full slate of appetizers to complement the usual kebabs and wraps. Dig into the traditional Palestinian specialties (ejja, musakhan, and mujaddarah are all on the menu) to get the full effect of delicately seasoned, flavorful eastern Mediterranean food cooked with care and finesse. Emeryville, mamalamees.com.

It may look like a pizza, but the Manakish version of an open-faced flatbread sandwich is a completely different experience—except for the delectable crust. For example, harissa sauce on the cauliflower-eggplant manakish gives the roasted veggies a zesty kick, and the tri-tip and cheese option is a long way from a pepperoni pie. Make sure to try the spinach and feta borek, with its layered pastry and wonderful filling. Walnut Creek, manakishoven.com.

There’s a reason Reem Assil has a national reputation: It’s her food—not the funky, urban-hip decor in her small storefront next to the Fruitvale BART station. The Pali Cali is a customer favorite, and even though I almost never order chicken dishes, this saj wrap was off the charts. Likewise, the meze platter is all killer, no filler. Parking might be an issue (consider BART), but the food—inspired by Assil’s trip to Lebanon and Syria—is worth the hassle. Oakland, reemscalifornia.com.

With 10 Bay Area outposts (including one across the street from San Ramon’s City Center Bishop Ranch), Sajj Mediterranean sets itself apart from most multilocation operations thanks to the freshness of the food. The menu is simple, and customers can mix and match—think a poke experience, but with a wrap, tahini, and falafel—but the sum is greater than the parts when locally sourced ingredients are tossed into the equation. This fast and high-quality chain is a winner for a quick lunch. San Ramon, sajjstreeteats.com.

A stylish atmosphere and innovative cocktail program make this a perfect date-night spot. The menu is extensive, so return visits may be required. Standards like wraps, kebabs, and falafel are great, while more adventurous items such as Arabic cheese and braised lamb in sheep’s yogurt (dinner only) deliciously reveal the owners’ eastern Mediterranean origins. One can’t-miss is the crumbled baklava—after one try, you’ll want it every time. Albany, zaytoon510.com.

When exploring the eastern Mediterranean food scene, it becomes obvious that the spelling of typical dish names varies from place to place—which is due to the difficulty of rendering Arabic words into English. So, shawarma versus schwarma? Just as tasty, no matter the spelling.

Baklava: A sweet layered pastry, usually filled with nuts and honey, often served as a light dessert or final dish.

Falafel: A chickpea and vegetable mixture that is rolled into balls and fried. It can be stuffed into pita (the kind with a pocket), along with pickles, salad, and other side dishes, or eaten on its own.

Ful: A broad bean—fava beans are the most common—that is often found in eastern Mediterranean dishes. Ful medames, a bean stew, is a staple of the Egyptian diet.

Harissa: The hottest Mediterranean spice has its roots in Tunisia, but this chili paste is typically more toned down, heat-wise, than versions found in other cuisines.

Labneh: A goat’s-milk yogurt dip or sauce seasoned with a variety of spices. It might be found on a meze plate to complement pita or used as a sauce for a main dish.

Manakish: A versatile dough that can be served flat (like a pizza) or used as a wrap (like a burrito).

Mujaddarah: A side dish of rice cooked with lentils and onions.

Saj: An unleavened flatbread cooked on a domed griddle (also called a saj).

Tabbouleh: A cracked-wheat salad with lots of parsley (which gives it a green hue), plus tomatoes, cucumber, and mint.

Tahini: A sesame-based sauce that finds its way into a wide array of dishes.

Za’atar: A mix made with spices such as hyssop, thyme, and sesame seeds that is sprinkled on salads and flatbreads or added to dips.