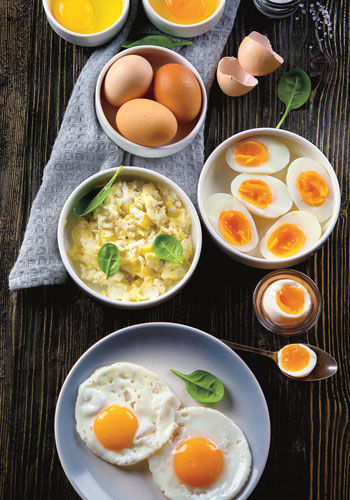 Whether scrambled, soft boiled, or sunny-side up, each egg is packed with six grams of protein. 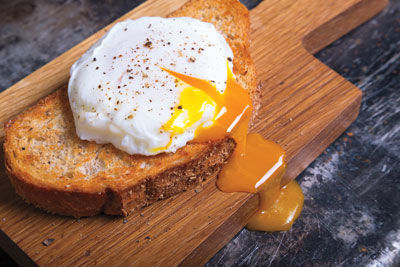 Poached eggs are great on top of thick-cut toasted levain—the perfect vehicle for sopping up yolk. 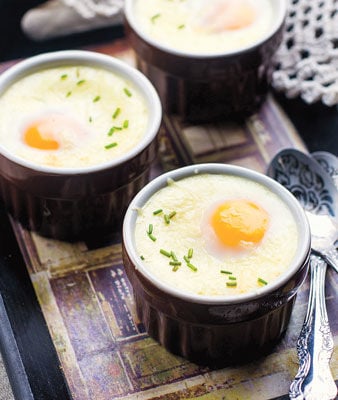 Sprinkle shirred eggs with fresh herbs, such as chives, to add flavor and visual appeal.

"Take a cloud egg, for example; that’s pretty food," Andrews says, referring to the whipped-fluffy whites that are baked in a pile, then topped with yolks and finished in the oven. "Now, two poached eggs on toast? That’s beautiful."

In her eateries, Andrews doesn’t mess around with anything overtly fancy. Instead, she lets the natural beauty of the ingredients shine through in her dishes.

Andrews—who operates two always-busy Sideboard restaurants in Danville and Lafayette—went to culinary school in Paris before using her classical training to create a style all her own. Here, she shares her expert tips and tricks for making eggcellent huevos five ways. sideboardkitchen.com.

Before getting started, it’s important to keep in mind some ground rules. Eggs are all about time and attention; show them some love, and they’ll reward you in return. Next, when using a pan, it must be hot; crank that burner up to a cruising medium. Finally, it’s best to cook with room-temperature eggs. While Andrews uses eggs fresh from the fridge at her restaurants, when she’s at home she lets them rest on the counter before introducing heat.

Andrews finds that many people tend to rush scrambled eggs, often throwing them in a skillet unmixed. But taking the extra step of beating them with a fork before putting them on heat makes a huge difference.

Additionally, she says, "It’s important not to let the eggs sit in the pan; you’ve got to keep them moving the whole time." That technique, coupled with a lightly oiled or buttered pan (Andrews uses a well-seasoned cast iron) and silicon spatula, can create fluffy magic. Just make sure to take the eggs out of the skillet when they look like they’re almost done, as they will continue to cook even after they’re removed from the heat.

The prospect of poaching eggs can often make home cooks quake in their aprons, but Andrews insists this method is quite simple. The key? Use a big pan and plenty of white vinegar (roughly one part vinegar to 10 parts water).

"Make sure there’s enough vinegar in your simmering water by tasting it, and really swirl the water around before adding the eggs," Andrews advises. The moving water is crucial for the egg whites to collect around the yolk, while the vinegar helps coagulate the whites. From there, you wait, and swirl, and gently tap the yolk to see if it’s ready after a few minutes.

Whether you call it fried, sunny-side up, or over easy, this is a classic breakfast preparation. Once the pan is hot enough, crack the egg into your oil and give it a little twirl around the skillet. Be patient and watch until the whites have just set before flipping to the other side. For sunny-side up, cover the pan with a lid to let the top cook.

"When my grandma used to make a soft-boiled egg, a three-minute egg was a three-minute egg," Andrews says. And that’s exactly what it is. Andrews insists on putting the egg in a pot filled with cold water, then bringing it to a boil. Once the water reaches a rolling boil, turn off the heat and let the egg sit for—you guessed it—three minutes to achieve the ideal, jammy yolk. If you prefer a firmer, hard-boiled yolk, leave the egg in for 12 minutes. Pro tip: Using slightly older eggs (about two weeks old) ensures easy peeling.

A fancy name for baked, shirred eggs are a Sideboard signature that Andrews serves up at lightning speed on busy mornings. Traditionally, an egg is placed in a buttered ramekin with savory ingredients—such as ham, mushrooms, and cheese—then baked for about 15 minutes. To save time, however, Andrews half poaches her egg before finishing it in a 400°F oven for a mere two minutes.