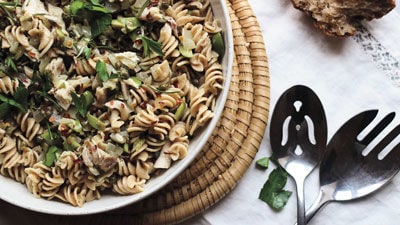 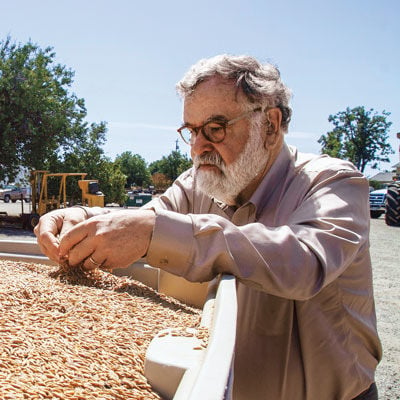 “We can't do 4 million pounds of wheat a day,” Bob Klein says. “But we can do a lot of wheat.” Photo courtesy of Community Grains. 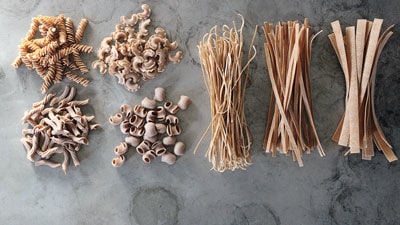 Bay Area diners pride themselves on knowing how their fruits and vegetables are grown, their meat is raised, and their fish is caught. But what about the backstory behind something as fundamental as wheat?

That’s the dilemma Bob Klein encountered a dozen years ago, while sourcing wheat for the freshly made pasta and breads at Oliveto, his acclaimed Italian restaurant in Oakland. "So much of [what] attracted me to [Oliveto] was the vitality of learning new stuff about food. It became the ethic of the restaurant," Klein says. "Then grain came up. I had never seen wheat grow, and it’s so much a part of our diet."

He was astonished by what he found—or, rather, couldn’t find. Namely, high-quality, sustainably produced flour. This was the germ of his idea for Community Grains, a cooperative of local bakers, farmers, plant breeders, scientists, and food activists dedicated to filling that void.

Klein isn’t one to shrink from a challenge. He had a successful pre-restaurant career as an Emmy Award–winning television producer, helping to launch hundreds of programs (including the travel staple Bay Area Backroads). At Oliveto, he’s been ahead of the industry curve, introducing practices such as seasonal sourcing, whole-animal butchery, and top-of-the-line acoustics. But re-creating an entire local grain economy, essentially from scratch, has proved to be a big task.

Most industrial flour is produced with a roller mill, which separates the grain’s essential ingredients and recombines them in a way that significantly lowers their nutritional value. Then, industrial bakers often add raw gluten, exacerbating (and possibly contributing to the rise in) wheat allergies. By contrast, each package of Community Grains’s whole-grain pasta, flour, and bread incorporates whole wheat kernels derived from one harvest at one farm, with no additives. Buy a bag of Hard Red Winter Wheat Flour, enter the batch number online, and you’ll find 23 facts about the wheat’s farmer, soil, class, variety, harvest and milling dates, and protein and moisture content.

Thanks to Klein’s relentless advocacy—he’s held educational seminars at Oliveto and spread the whole-grain gospel at food-industry gatherings across the country—influencers are taking notice. High-profile chefs such as Josey Baker in San Francisco and Nancy Silverton in Los Angeles use Community Grains flour, and the brand has public seals of approval from renowned food writers such as Michael Pollan, Marion Nestle, and Mark Bittman.

Community Grains now collects upward of 1 million pounds of organic whole-grain wheat each year. That’s a drop in the bucket compared to industrial operations, but it could be a catalyst, changing the way California—and perhaps the nation—thinks about wheat.

"We are not going to feed the world," Klein says, "but I think people should eat good food." communitygrains.com.