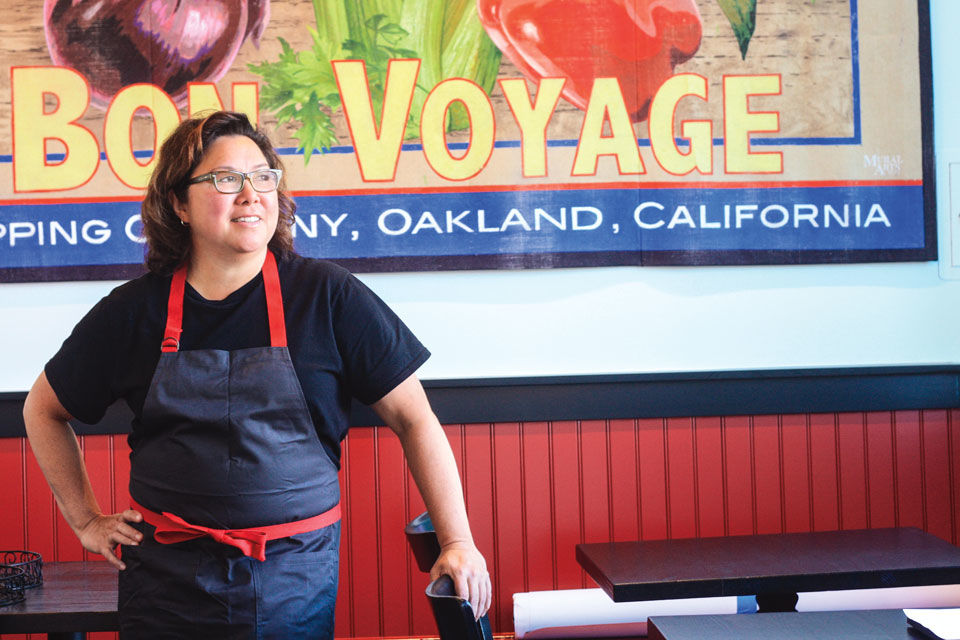 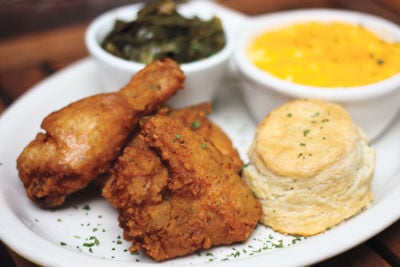 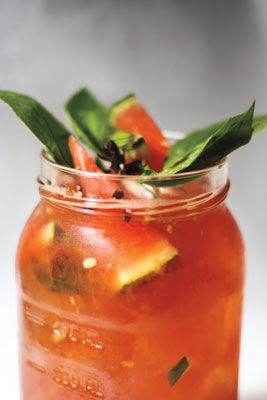 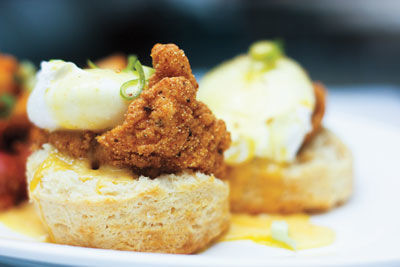 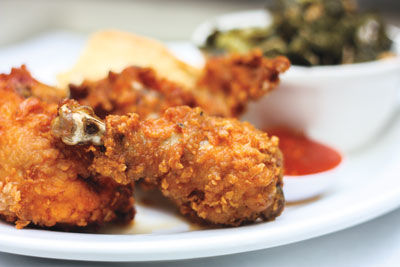 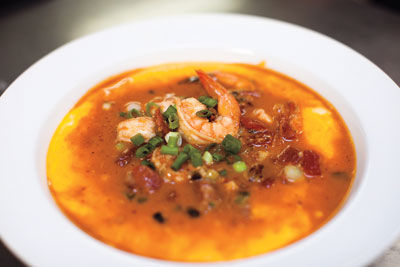 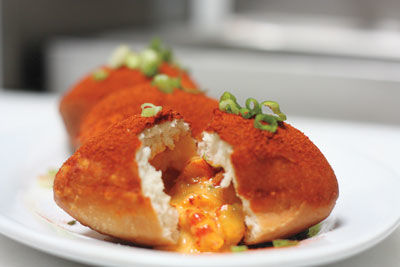 Ask anyone about their trip to New Orleans, and you’ll likely notice a twinkle in their eyes. There’s a real reason, after all, that the city’s unofficial motto is laissez les bons temps rouler: Let the good times roll.

Just like that fun-loving town, Brenda’s Oakland aims to please, as you can see by the broad smiles on the faces of folks lined up out the door along Broadway to get a comforting taste of the Big Easy. It’s not all about the food, either—although the crispy-crunchy fried chicken, on-point po’boys, fresh-fried beignets, and other Cajun-inflected soul foods play a big part. There’s an infectious joy, a lighthearted sense of fun, permeating this place that seems to be a direct extension of Brenda Buenviajé, the co-owner and irrepressible culinary visionary behind an eponymous mini restaurant empire. A native of Harvey, a small town in the West Bank section of New Orleans, Buenviajé toiled away in the Bay Area fine-dining scene for a decade before returning to her roots in 2007 by launching Brenda’s French Soul Food—which, along with her Brenda’s Meat and Three follow-up, has amassed a cult following in San Francisco over the last dozen years.

"It’s the food, of course, and the prices, but it’s also reflective of my management style and who I am: I try to treat my employees well, and I just truly love what I do," she says of her success. "My goal has always been to keep things casual, fun, accessible, and affordable. So far, it seems like we’re pulling that off in Oakland."

Years in the making, her East Bay outpost opened in October on the ground floor of a brand-new Temescal apartment development. Occupying a corner location, the space is flooded by natural light and has ample patio seating bordered by a New Orleans–esque wrought iron gate. Best of all is the enormous demonstration kitchen, where you can watch a blur of cooks deep-frying, stirring, sautéing, smoking, and plating.

"The planning for [Brenda’s Oakland] started with me getting the kitchen I always wanted," Buenviajé says. "We designed everything else around that."

They’ve needed every inch of the ample venue—particularly in those first couple of months, when Buenviajé recalls thinking, "Is every human being in the East Bay trying to eat here right now?" Her decision to provide fast-casual, order-at-the-counter service at the Oakland spot has also paid dividends, allowing Brenda’s to maintain quality and keep prices low while balancing the in-house and to-go arms of the business. (The team hopes to eventually phase in delivery and catering, too.)

As for the food, Buenviajé calls it a "greatest hits" selection from her first two eateries, where she let customers dictate the direction of a menu that originally included more "elevated" French dishes.

"The people who came in did not want Nicoise salad; they wanted New Orleans—fried chicken, po’boys, gumbo," she recalls. "My thought was that Californians wouldn’t be interested in Southern food that they considered unhealthy. I was completely wrong. They were like, ‘Thank god, something really delicious! I don’t care if it’s bad for me.’"

That leaves quite a bit to choose from, as the open-all-day restaurant offers separate menus for breakfast (8 a.m. to 3 p.m.) and lunch/dinner (11 a.m. to 9 p.m.). Luckily, it’s all broken down into a mix-and-match format that allows diners to try a bit of everything.

If you’re a fan of fried chicken, start there. Inspired in part by Buenviajé’s beloved Popeye’s, Brenda’s Fried Chicken, or BFC, is audibly extra-crunchy and packed with enough spice to ensure "customers won’t be reaching for any condiments," she says. Indeed, it’s served with a red pepper jelly that proved expendable; the chicken’s slow-building heat provided more than enough excitement. Go for the combo meal (two-, four-, or six-piece), and try a couple of expertly executed New Orleans staples for sides. Top of the list are the gumbo—resonant with rich roux, silky okra, and smoky andouille sausage—and the deceptively simple-sounding red beans and rice, loaded with deep layers of flavor courtesy of the Cajun "holy trinity" of chopped bell peppers, onions, and celery (andouille doesn’t hurt, either).

Seafood lovers will also find plenty of joy. The shrimp and grits presents a heaping bowl of perfectly bouncy sautéed shrimp accented by a spicy tomato-bacon gravy and served atop cheddar grits. The cheese seems a little like overkill, acting as a physical barrier from the creamy grits, but it’s a bellyful of goodness regardless. Similarly, the fresh, blackened catfish was moist (not slimy) under a crust of Cajun-red, iron skillet–seared garlic, onion powder, cayenne, and paprika. It comes with an addicting andouille cornbread dressing that evokes Thanksgiving comfort with a Southern twist.

Dressed with chipotle rémoulade, the deep-fried shrimp and oyster po’boys—there are 13 varieties on the menu, including several vegan options—perfectly capture the simple pleasures of this beloved NOLA staple. (Also worth a try: the No. 1 Son, in which Buenviajé makes excellent use of her kitchen’s new smoker to produce meltingly tender beef brisket, enhanced by vinegar-heavy vegan barbecue sauce.)

We really can’t go any further without mentioning the beignets—powdered sugar–coated pillows of fried-dough deliciousness. You can get ’em plain, but Buenviajé successfully breaks with tradition by offering three more versions stuffed with cinnamon-apple, Ghirardelli chocolate, and what may be her most famous culinary creation, cheesy-spicy crawfish.

Order a flight to taste one of each for $12—because why not? New Orleans isn’t exactly known for restraint, and to its great credit, neither is Brenda’s. brendasoakland.com.