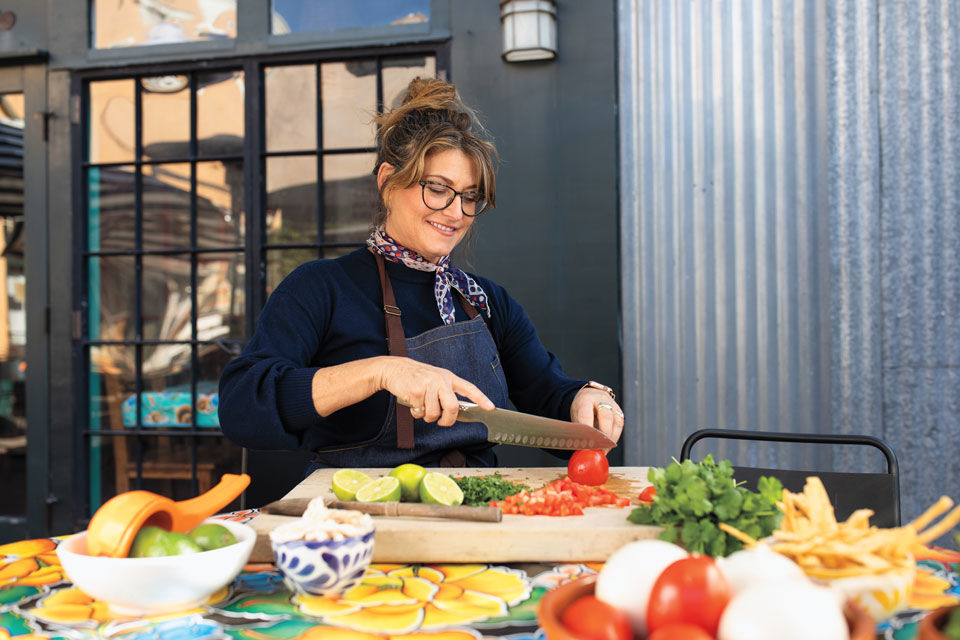 Dona Savitsky prepares one of her most popular Mexican dishes, sopa de lima. 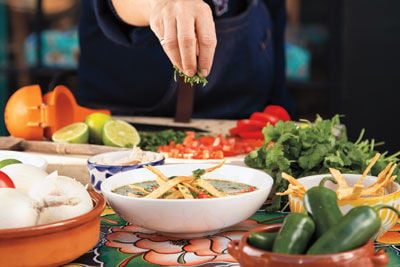 Savitsky garnishes her soup with cilantro and tortilla chips. Photo by Cali Godley. 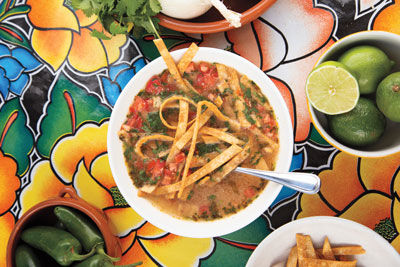 Either order sopa de lima at Doña in Oakland, or make the seasonal dish yourself. Photo by Cali Godley. 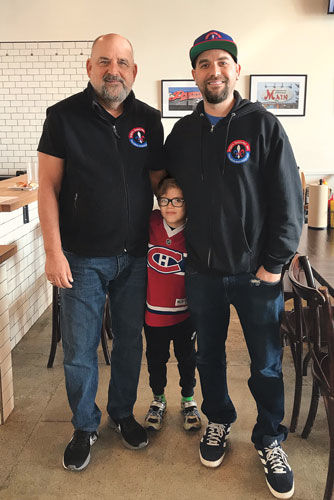 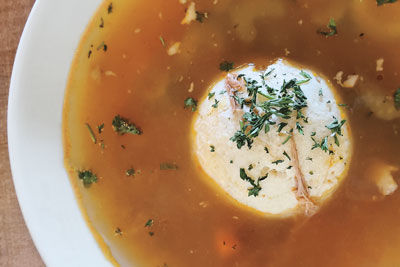 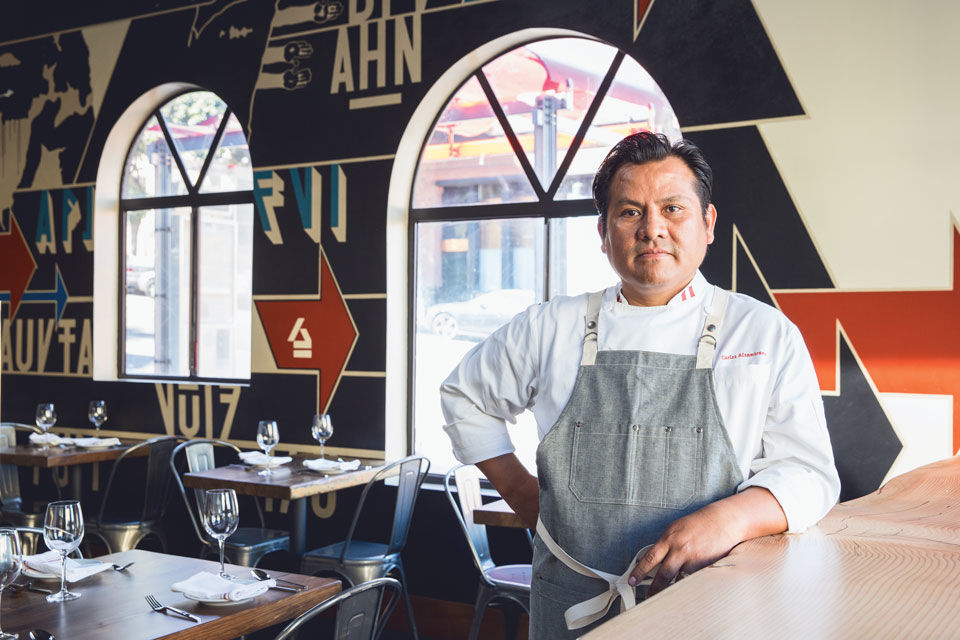 Carlos Altamirano is also the head chef of Lafayette's Barranco and Paradita Eatery in Emeryville. Photo by Kristen Loken.

When we get sick, we all hear the same advice: Get plenty of rest, drink lots of fluids, keep warm, and eat some chicken soup. Diablo can’t help with the first three recommendations, but we can provide some suggestions on the soup front.

With peak winter flu season upon us, we asked chefs from three popular East Bay restaurants—Dona Savitsky of Doña, Lex Gopnik-Lewinski of Augie’s Montreal Deli, and Carlos Altamirano of Parada—for their favorite takes on chicken soup. They were generous enough to provide recipes you can prepare in the comfort of your own home. (You can also order all three soups at the restaurants—just make sure to cover your mouth if you sneeze there.)

So, bundle up, hydrate, grab some shut-eye, and dig out that big pot hibernating in the back of the cabinet. You’ll be back on your feet in no time.

Dona Savitsky was a trailblazer when she opened Doña Tomás in Oakland’s Temescal district a decade before the neighborhood became one of the city’s premier culinary destinations. In December, she moved her sit-down restaurant—known for its elevated takes on regional Mexican cuisine—to Piedmont Avenue and rebranded it as the more fast-casual Doña. Lucky for North Oaklanders, she’s kept many of her most popular dishes, including sopa de lima.

Adapted from a recipe at San Francisco’s Square One, where Savitsky started cooking as a 22-year-old, this take on a favorite Mexican soup incorporates chopped jalapeño, fresh lime juice, cilantro, and crushed tortilla chips. Those additions give it a south-of-the-border flavor profile while lending spice, texture, and refreshing brightness to a rich chicken stock that Savitsky reduces with onions and garlic for extra savoriness.

"All over Mexico, and the world, all cultures have a chicken broth–based soup that is both comforting and delicious," Savitsky says. "So, this is our version."

Chef’s tip: "Make your own chicken broth with whole chickens and shred up the meat to use in the soup for better flavor."

Place broth in a large saucepan over medium heat and bring to a simmer.

In a separate soup pot, heat the oil over high heat for 2 to 3 minutes. Add the onion, and sauté for 4 to 5 minutes, until translucent, stirring with a wooden spoon to prevent burning. Add the garlic, and sauté for 30 seconds, stirring constantly until the aroma is released. Add the jalapeño and tomatoes, and lightly sauté for 5 minutes. Stir in the juice and half of the cilantro, then remove pan from the heat.

Pour broth into the pot of sautéed vegetables. Place pot back on the stovetop, and bring to a boil over high heat. Add a few pinches of salt, reduce heat to medium, and simmer gently for about 30 minutes, until the flavors completely fuse. Add half of the shredded chicken (reserve the remainder for another use), and simmer for about 5 minutes, adjusting the seasoning with salt to taste.

Ladle the soup into large bowls, and top each with ½ cup of crushed tortilla chips. Divide the remaining cilantro among the bowls. The garnish must be crispy and fresh, and sized so it fits on a soupspoon and provides appropriate contrast.

The soup can be refrigerated in a covered container for up to 3 days and reheated as necessary, but the tortilla and cilantro garnish should always be added at the last minute.

The way that Lex Gopnik-Lewinski explains it, matzo balls are to Jewish families what meat sauces are to Italian ones.

"Recipes have been passed down through the generations, so everybody loves what they grew up with," says the owner of Augie’s Montreal Deli. "This is what I grew up on, so to me it’s what a matzo ball should be. But everybody’s bubbe makes the best matzo ball. I don’t want any of that fight!"

The Canada-raised Gopnik-Lewinski says this particular recipe comes from his great-grandmother, although his family calls it Babcha’s Chicken Soup (babcha is Polish for "grandmother"). Growing up, he says, it was the go-to dish when anyone had a cold, and it’s become a staple at Augie’s since the west Berkeley eatery opened in 2018—particularly in the Bay Area’s "colder" winter months. ("We are Canadian, so cold is a relative term," he points out.)

For the most part, Augie’s keeps things authentic and simple, with the bulk of the flavors coming from the chicken, garlic, celery, carrots, leeks, and onions. (Charring those onions on the stove is what gives the soup its rich yellow color.) There are, however, a few twists that make Gopnik-Lewinski’s version unique. A dash of smoked paprika lends it an orange hue and slightly smoky taste. And he adds a half bottle of white wine—"because," he says, "why not?"

Chef’s tip: "We make a garlic mayo to add a little more garlicky goodness to the soup. The more garlic the better!"

To make the matzo balls:

Stir the matzo meal, baking powder, and salt until mixed. In a separate bowl, whisk the eggs, soda water, and canola oil until smooth. Pour the liquid mixture into the dry mixture and combine. Cover and place in the refrigerator for 1 hour.

Using a scoop, form golf ball–size balls, and place them on an oiled sheet tray. Cover and put in the refrigerator for at least 4 hours.

Bring salted water to a boil in a large pot. Add in the matzo balls. Once the balls have floated to the top, reduce heat to a simmer. Continue to cook for about 35 to 40 minutes. Remove from the water with a slotted spoon, and transfer to a sheet tray to cool completely.

To make the soup:

Place all the soup ingredients (except for the baby carrots and the ½ bunch of celery) into a large pot on high heat and bring to a simmer. Continue to simmer for about 3 hours until the chicken is tender. Strain and discard the vegetables. Reserve the broth. Shred the chicken meat and add to the broth. Bring the broth to a simmer, and add in the baby carrots and celery. Simmer until tender. Add one matzo ball to each bowl while plating.

The nickname for this traditional Peruvian chicken soup says it all.

"In Peru, there are three things people want when they are hungover," says Carlos Altamirano, the chef and restaurateur who runs Parada in Walnut Creek, Barranco in Lafayette, Paradita Eatery in Emeryville, and several other Peruvian eateries around the Bay. "Ceviche, hangover soup … or beer."

So, if you’re not interested in raw fish or the "hair of the dog" method, this soup may be your best bet. Other than the chicken stock base, Altamirano swears by the soup’s jalapeños and fresh lemon elements to help "bring you back to life," whether you’re recovering from a night of drinking or just a common cold. In Peru, the dish is typically made with rice, but Altamirano prefers rice noodles, which he finds more nourishing. That tweak, along with the addition of a fresh herb garnish, gives Parada’s version an invigorating zip and a flavor similar to that of Vietnamese pho.

As for what vegetables to drop in, there are no hard-and-fast rules besides potatoes for extra heartiness. Which means you can customize your own chicken noodle soup with any veggies that are in season or you enjoy most. That’s what Altamirano does at Parada, and it’s also what his mother did when he was growing up—something that gives the soup a special significance.

"I tried this when I was very young," he says. "My mother would make it for us two to three times a week."

Chef’s tip: One shortcut is to buy a whole chicken already cooked. This saves time on cooking the chicken, and you can still boil the bones to create an extra-flavorful broth.

Heat oven to 400°F. Place the assortment of raw seasonal vegetables on a baking sheet, toss with olive oil, and season with salt and pepper. Cook for approximately 30 to 40 minutes, mixing halfway through, until roasted. Remove from oven and set aside.

In a large pot of boiling water, add raw chicken breasts and poach for 10 minutes. Remove breasts and set aside. Once cooled, shred chicken. Reserve 1 cup of water to be added to the soup. Prepare rice noodles according to package directions. Drain and set aside.

In a saucepan, heat olive oil over medium-high heat. Add onion, tomatoes, garlic, and ginger; sauté for 2 to 3 minutes. Add the broth and bring to a boil. Add the potato, veggies, shredded chicken breast, cooked rice noodles, and 1 cup of the reserved water to the saucepan. Turn heat to low so the mixture simmers.

Place the spinach, cilantro, jalapeño, and 1 cup of water in a food processor. Blend until smooth. Transfer mixture to the saucepan. Add salt and pepper to taste as needed. Continue to simmer until soup is heated through and veggies are fully cooked.