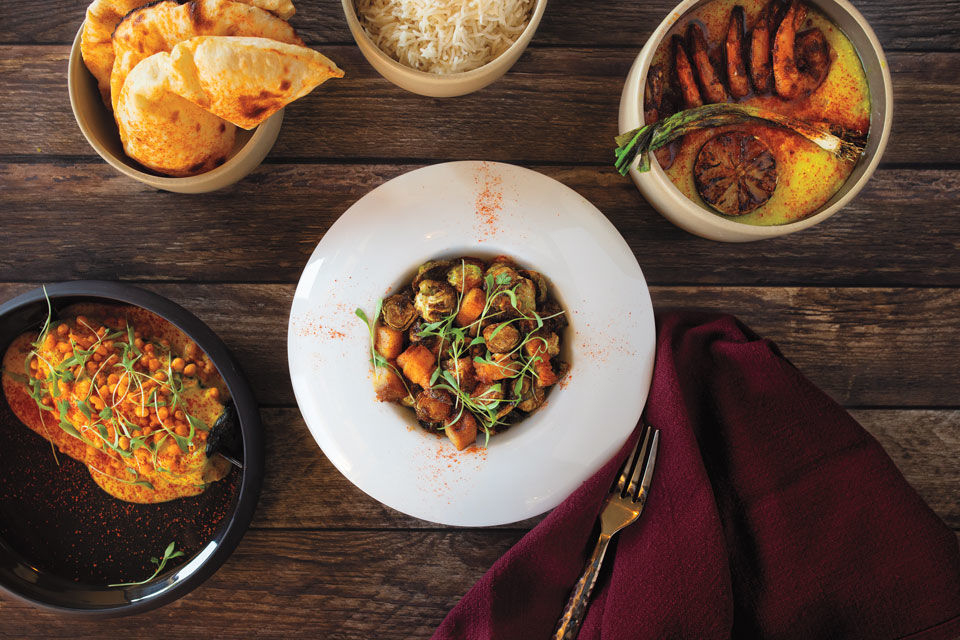 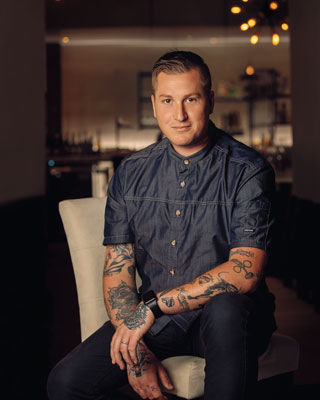 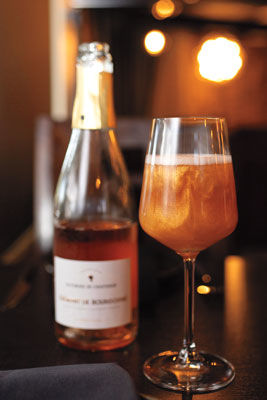 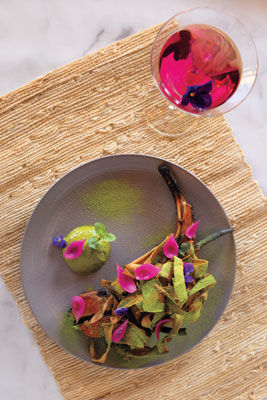 The Salt's Indian-spiced lamb ribs and No. 9 cocktail. 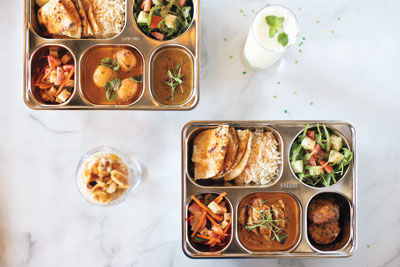 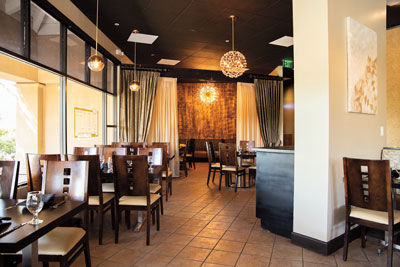 Think of the Salt as a Bollywood movie incarnated. The 2007 film Cheeni Kum features a chef so infectiously passionate about food that it convinced Srikanth Yendluri, an executive at Salesforce in San Francisco at the time, to open his own restaurant.

"That’s where the seed started," Yendluri says. He secured a space and, in fated Bollywood fashion, enlisted Jerrod Doss, a chef as obsessed with food as the film’s protagonist. "From the get-go, I liked his way of thinking," Yendluri says.

Doss, who has cooked at several Michelin-starred restaurants and was the chef at Shinmai in Oakland, has invented a tantalizingly refined Indian-inspired menu. Start with his dal bisque, a velvety golden lentil soup accented with cumin and lime and finished with turmeric oil and muri (crispy rice puffs). Or snack on panisse—precisely molded fried chickpea cakes piped with sweet black garlic puree and garnished with wee mushrooms pickled in Indian spices. I could eat a dozen.

The Salt’s location, on the edge of an ordinary mall and far from San Ramon’s snazzy City Center Bishop Ranch, seems unlikely for such polished fare, but that only makes its discovery feel more serendipitous. The serene dining room is set off by starburst chandeliers and modern pendant lighting, and it feeds into a sparkly white lounge.

Yendluri, an avid home cook, has no restaurant background but says he wanted to create an experience that would induce "a warm fuzzy feeling." He adores cocktails and hired a former general manager from August (1) Five—a chic Indian-inspired restaurant in San Francisco where Doss also worked—to develop a beverage program. He’s since turned over the cocktails to Elena Tonako, formerly a bar manager at Bridges in Danville.

Doss is minimalist in his presentations, using negative space on the plate to make the vivid color wheel of Indian spices really pop. He’s passionate about lime and sumac, ingredients that tingle the palate and leave you coming back for more. One of my all-time favorite dishes was sashimi of ocean trout dressed with lime and sumac. That selection was at Shinmai when, it turns out, Doss was in the kitchen.

The salmon I tried at the Salt also incorporated sumac and lime, but this fish lacked moisture, and the plate didn’t come together. Still, seared in cast iron, glazed with verjus, and served with a rich celeriac puree perfumed with vanilla and truffle, it’s a dish with tremendous potential.

Much more beguiling were Doss’s lamb ribs: rack chops marinated in mustard oil and chili (and lime, no doubt), cooked juicy-rare and paired with a bright mint-cilantro chutney. Finished with a pungent note of fresh curry leaves—dried and dusted—it’s a fun dish to eat; the long-bone chops arrive under a tangle of spice-dusted parsnip chips.

Another whimsical creation was an Indian riff on pulled pork. With naan in place of a bun, tamarind barbecue sauce, and lime-pickled cabbage with garlic raita (standing in for mayonnaise), it’s sure to become a signature item. These dishes were available in the summer and fall, but Doss’s winter menu is sure to please, too. He was imagining chestnut soup with chickpea croutons and an Indian-inspired cioppino.

Because of the Salt’s location, the eatery had a slow start, but by my third visit—during lunch’s opening week—traffic was steady. The smart prix fixe concept starts with a palate-cleansing salad in a cumin vinaigrette, followed by a "bento box" of coconutty lentils, pillowy chickpea fritters, rice, naan, pickles, and your choice of main (go for the vegetarian options). I particularly loved the dessert: vermicelli pot (think of a light rice pudding) with a tease of pineapple and a garnish of pistachios and almonds toasted in sweet brown butter.

Restaurants as good as the Salt have come and gone over the years, often failing after a talented chef departs, but Yendluri and Doss’s relationship appears durable. "It’s amazing," Doss confirms. "I finally found a platform off which I can leap and express myself." Meanwhile, Yendluri is committed to making Doss an equity partner.

There is work to do. The servers could be better informed—and consequentially, more passionate—about the menu. The floor was short-staffed on my lunch visit, but Yendluri, dressed in business-casual attire, was doing his best to help out. He radiated enthusiasm as he tried to address customer needs.

"I knew I was taking on a project that was very, very risky," he later said over the phone. But again, his passion was palpable as he spoke, with the charm of a boy having successfully asked his object of affection out on a date.

I think it will all work out. Hollywood doesn’t get to have all the happy endings. thesaltsanramon.com.