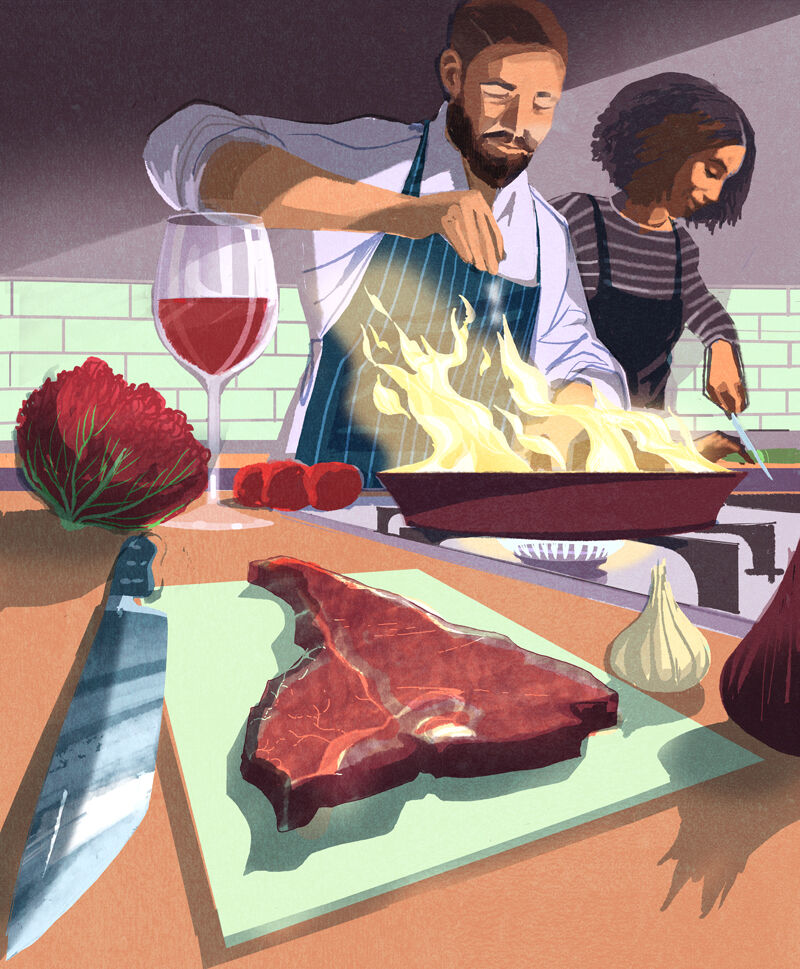 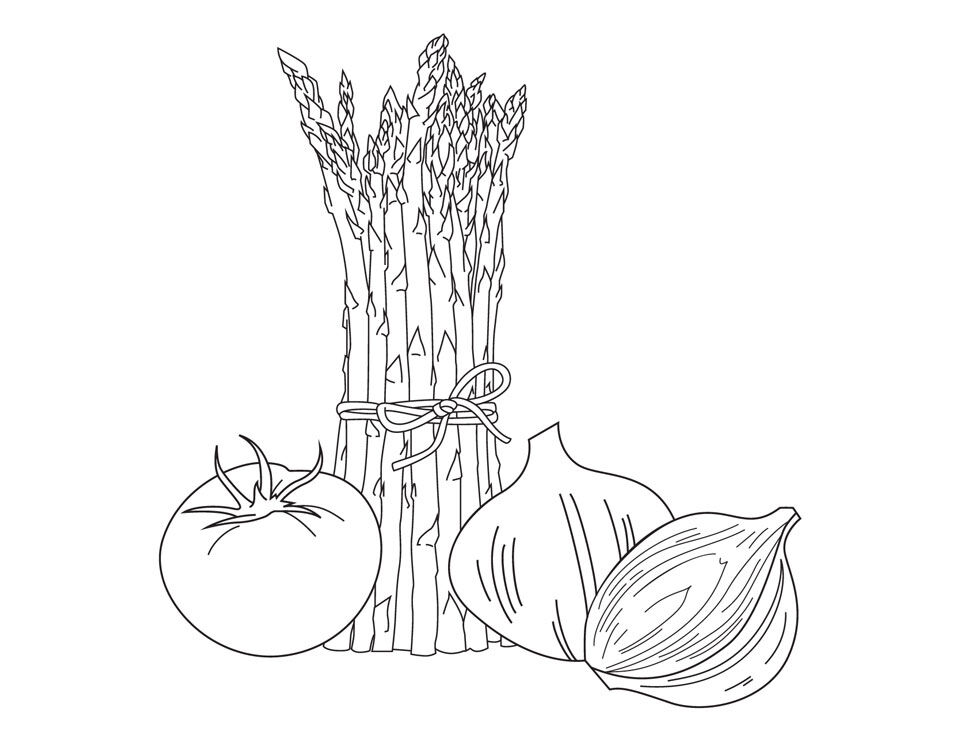 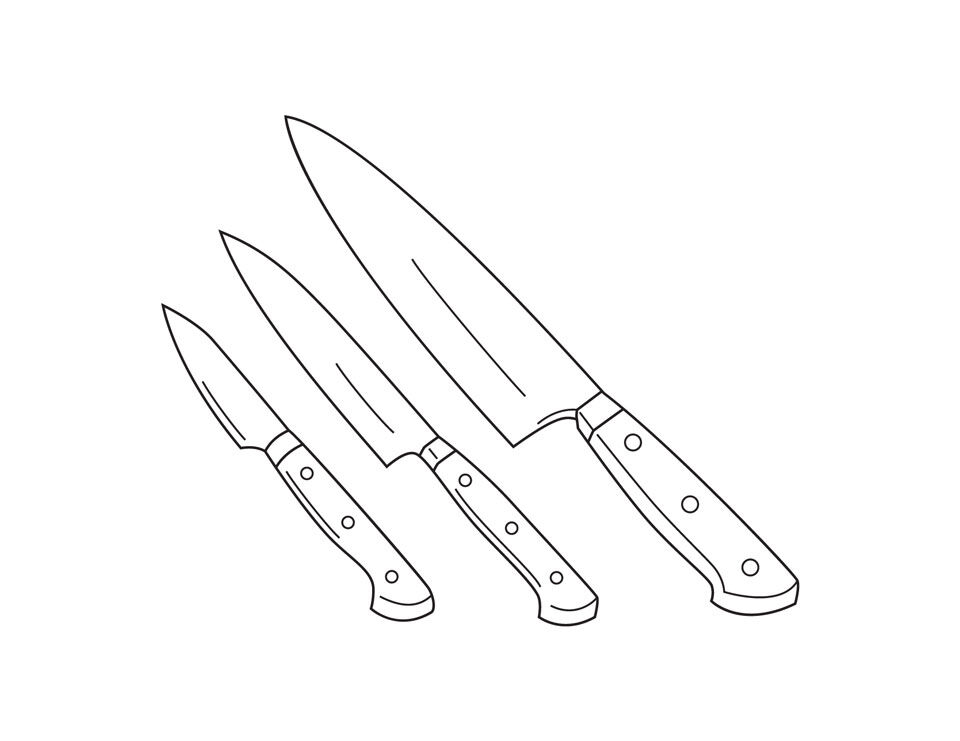 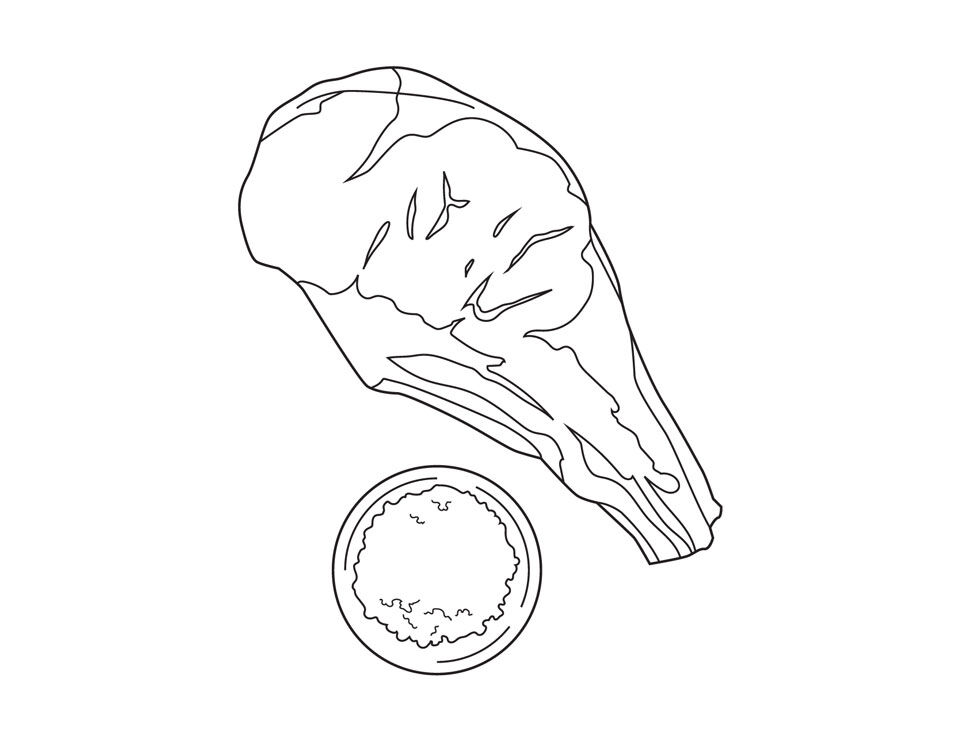 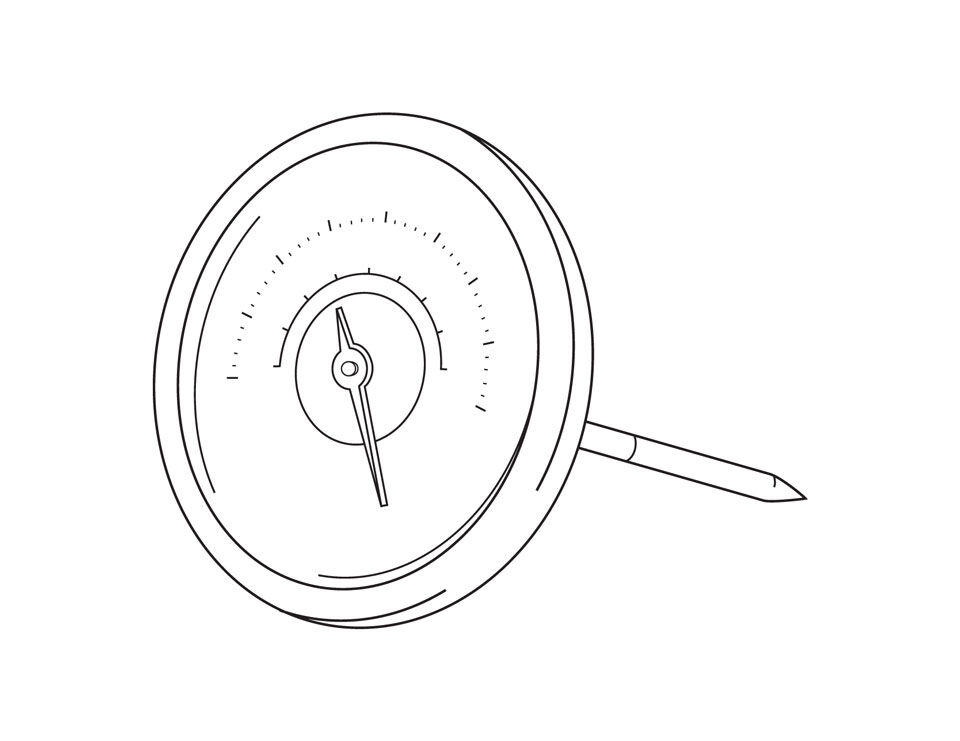 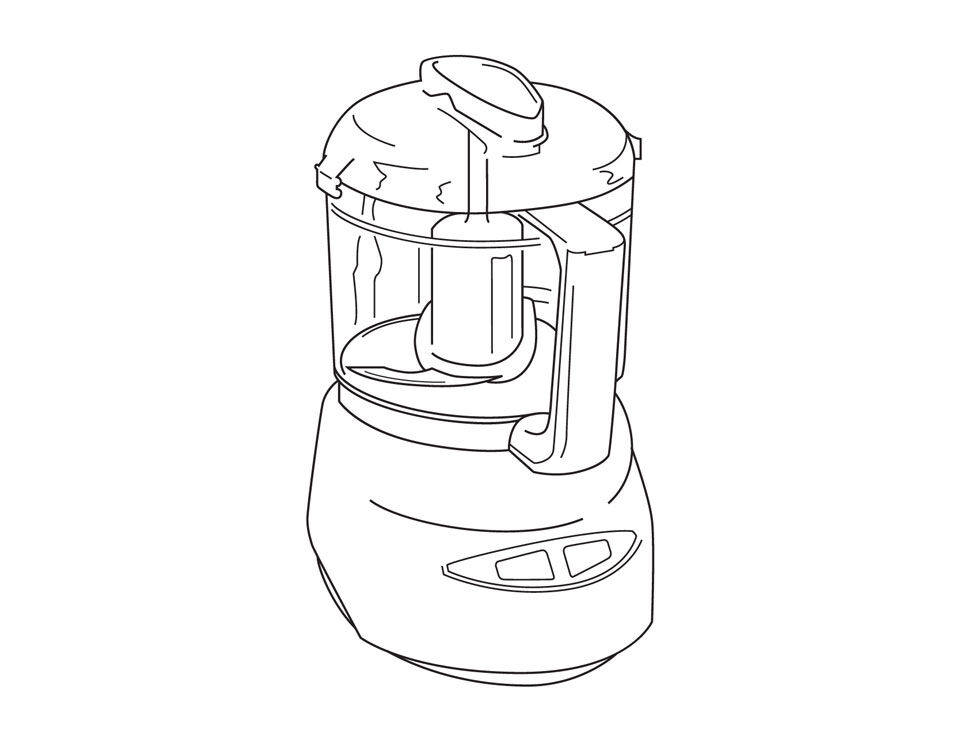 Like it or not, we’re all spending more time in the kitchen, so we might as well make the best of it. Maybe we’re not whipping up boeuf bourguignon or southern Indian lamb curry every night, but there are ways to upgrade even the most familiar meals on the household menu.

We tapped the experience and expertise of several prominent local chefs to take a classic meal—grilled steak, baked potatoes, a big salad, and peach cobbler for dessert—and make it better than ever.

Here’s how our dinner went, but of course the same tips and tricks apply to almost every dish on your weekly menu. Let’s get going …

USE THE BEST INGREDIENTS

“When you buy locally grown organic products,” says Amy Murray of Berkeley’s Revival Bar and Kitchen, “the flavor is much higher—50 percent or more.” So, my morning began at the farmers market, where I decided that getting fruit from a stand that sold only fruit was a good idea. Another spot supplied peppers and onions, but not everything I needed was available, so I got the other ingredients at Lunardi’s, known for its quality produce.

Now for the big splurge. John Marquez of  Concord’s Lima believes the biggest bang for  the buck comes with the main course. “I don’t see the need to get organic onions for a stew,” he says, “but the main ingredient has to be the  best quality.” A steak from a high-end butcher  will be much better than what’s sold in your  average grocery store; with that in mind, I  stopped by Oakland’s Clove and Hoof. There, a butcher offered me gorgeous rib eyes, reminding me that the only spice necessary before cooking was a bit of salt.

Getting the best product at farmers markets is not just a matter of taste, says  Brie Mazurek from CUESA,  which runs the Ferry Plaza Farmers Market. It depends if you’re shopping for flavor and ripeness,  or if you’re taking into  account whether the product is farmed sustainably and organically.

“That's what makes a farmers market unique—that you can actually talk to the grower and ask them about their practices and products.”

Here are some things to keep in mind on your next trip.

Bargain shopping | Arrive early to  give yourself time to compare prices. As an extra incentive to buy seasonally, farmers often offer special deals on crops that are plentiful.

Terminology | The term “certified organic” is regulated by the USDA and signifies that a product was grown to a certain standard (free  of pesticides, growth hormones, and antibiotics). The terms “pesticide free” and “no sprays” are unregulated and therefore unverifiable.

USE A REALLY GOOD KNIFE

I confess I was a doubter. After all, I’ve seen guys who could barely break 100  on a par-three course blow $350 on a putter, and it didn’t suddenly turn them  into Tiger Woods—so how was an expensive  knife going to make me a better cook?

“Knives are really important,” says Murray, a stance echoed by Marquez, who points out something I unfortunately learned firsthand: “If you cut yourself with a dull knife, it hurts more than with a sharp knife.”

So, my wife, Maggi, and I invested in a Japanese  Global knife, which is so sharp that it makes  everything easier and faster—and the fact that we haggle over who gets to use it is proof of its value. Can I point to any one way that the knife made the meal better? No. But did it make the process more efficient? No question.

Bottom line: A good knife, like good health, enhances everything it touches.

THE ALLURE (AND METALLURGY) OF JAPANESE KNIVES

“We like European blades,” says Katy Jane Tull of Bernal Cutlery. “But the Japanese have some really special steels—the metallurgy of Japanese blades is next level.”

Gyuto | This Japanese take on the all-purpose chef’s knife is usually eight to nine inches long with a pointy tip, and can be used for all kinds of kitchen tasks.

Santoku | Smaller (six to eight inches) and more accessible, the santoku is a hybrid between a chef’s knife and cleaver that cuts vegetables and boneless proteins.

Petty | Similar to a Western utility or paring knife, these small, precise blades can do double duty for  in-hand or board jobs.

DON’T BE AFRAID OF SALT

In her book and TV series, Berkeley’s Samin  Nosrat emphasizes the power of salt, and Marquez  agrees—but there’s a fine line between enhancing  the taste of an ingredient and overwhelming it.

For example, if I’m paying $30 a pound for steak, I want to taste the steak, not the salt I put on it. And if I spend 30 minutes peeling and preparing fresh peaches for the cobbler, I want to taste the peaches, not the salt that goes into the recipe. (And along those lines, if you have fresh fruit in any dish, don’t over-sugar—you can taste sugar any time, but when, say, strawberries  are in season, let the strawberry flavor step  forward.)

Then again, just the right amount of salt can elevate the taste of a cut of meat from good to superb and make the dullest vegetable (I’m talking to you, zucchini) sparkle. For me, though, I have trouble zeroing in on “just the right amount,” so I err on the side of caution.

SALT TO THE FINISH

Describing himself as a “salt addict,” Oaktown Spice Shop cofounder John Beaver says that this pantry item can be divided into table salt or mineral salts and finishing salt. Made by evaporating sea water, finishing salts consist of larger flakes that are less dense.

“When pinched and sprinkled over foods, they give you a salty burst that your taste buds detect. They provide you with a satisfying salty contrast to the other tastes.”

Beaver gives some of the most popular varieties available at Oaktown Spice Shop.

Fleur de sel | Classic French finishing salt with smaller grain sizes than many others and a wet texture.

Marisol sea salt | A smaller flake that tends to stay in its crystal form when folded into doughs, delivering a salty crunch in baked goods.

Himalayan pink salt | Not considered a finishing salt because of its density, it is mineral rich and very pretty.

Ghost chili pepper sea salt | A flaky salt with a muted intensity from one of the world’s hottest chilies. The salt tames the heat. It is still hot but it doesn't linger.

Matcha sea salt | Crunch flakes with subtle grassy and nutty notes. This one works great for a cocktail rim.

Umami sea salt | Our most popular salt and maybe even seasoning. This salt works like MSG but doesn't contain MSG. With sweet, rich flavors from black garlic layered with earthy and savory ones this salt makes every dish taste better.—E.F.

FOOD THERMOMETERS ARE A GIFT OF THE GODS

Then I got a meat thermometer that allowed me to place the sensor in the potato while it cooked. The internet helpfully told me that the perfect  temperature for a baked potato was 210°F, so now  I just wait until the magic number is reached.

“A thermometer is essential,” says Murray, but you need two kinds of thermometers—the one you  place in the food while it cooks and the one that can give you an instant reading. I used the  second kind to make sure the rib eyes didn’t overcook. Either the fire was especially hot, or these steaks cooked quickly, because it only took a few minutes before the thermometer  said it was time to get those steaks off the  fire. (And the thermometer also allowed me  to get Maggi’s steak a little more well-done  than mine.)

As might be expected, Aaron Rocchino of Berkeley’s Local Butcher Shop is an expert on cooking meat. And as such, he really doesn’t need a meat thermometer to tell him when something’s ready to come off the grill (or out of the stove or pan).

“I come from a restaurant background so testing by feel, sight, hearing, and smell are my go-to methods.”

For the rest of us  laymen, Rocchino recommends following the safe minimum internal temperature guidelines set by the USDA.

It took us a while to finally buy a full-on food  processor, but its size relegated it to a cabinet, and its weight made it a mini production to set it up. It wasn’t that hard, really, but we just never seemed to use it as often as we could.

Maggi suggested we get a small one, and though I wasn’t convinced, we did. It now sits comfortably on the counter and has become a go-to appliance, just as it is for Albert Rivera of Lafayette’s Metro.

“I use it for garlic,” he says, “because it comes out chunkier than from a hand press, and it’s less likely to burn.” He also uses it for purees and  myriad other tasks, calling it a “lifesaver.”

For our meal, we used it twice: once to  create the dough for the cobbler, and then to blend the fennel- and cumin-based salad  dressing. Cleaning it between uses is a breeze because of the small size and simple setup, and you don’t really need a big machine  to chop something up. As coaches often say, the best ability is availability, and the mini food processor on the counter is always available.

Making one of Metro executive chef Albert  Rivera’s favorite  versatile marinades—good for everything from steak, lamb, and poultry to fish, mushrooms, and tofu—is a snap with the help of a food processor (mini or otherwise).

Put everything in the processor and puree. (It’s not necessary for it to be smooth; a little bit coarse is good.) For more information, go to metrolafayette.com. —E.F.

What matters, in the end, is the meal on the table, and using all these tips and tricks of  the trade paid off—big time.

The fresh ingredients made the salad and the cobbler shine, and the high-end steak was spectacularly good.

The new knife got a major workout, and it made the whole process of preparation smoother and more efficient.

Salt? I probably under-salted, but the focus on the taste of the meat and peaches was worth it. When you go all out on ingredients, only the most confident chef should roll the dice on oversalting.

Then, the familiar dinner was served.  The two of us, who are often harsh critics of kitchen failures, had little to say except for  occasional murmurs of “I love this” or “It’s  so good.”

And the professional cooks, we would like to believe, would have been pleased too.