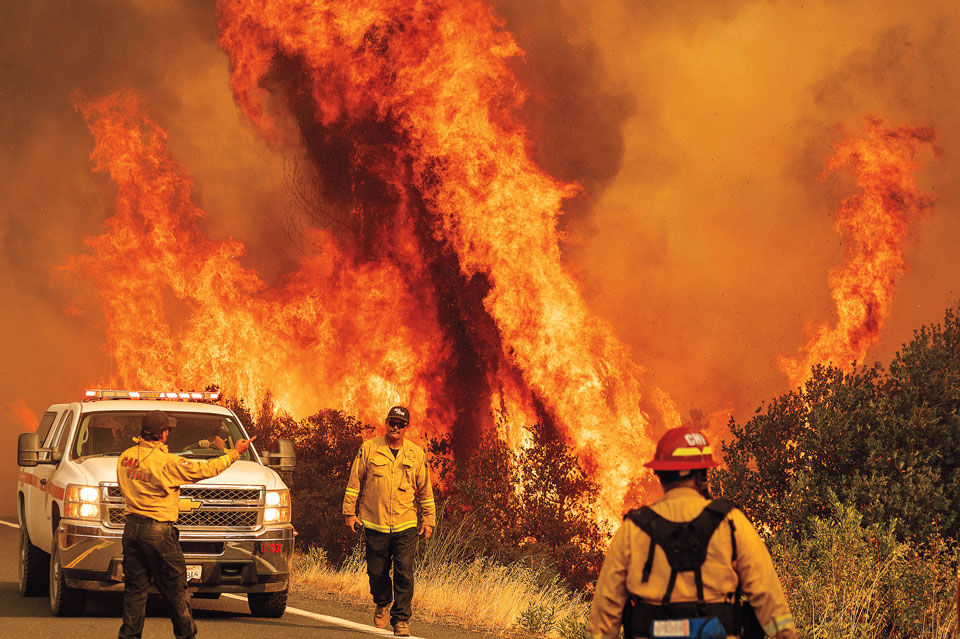 Firefighters work to contain the flames at the LNU Lightning Complex fire in Lake County. It is one of the largest recorded fires in California history. 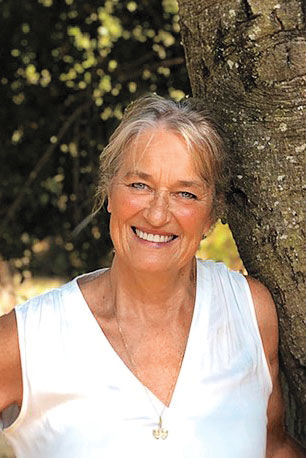 Leslie Krikorian organized her Lafayette neighbors to clear dead wood from their properties. 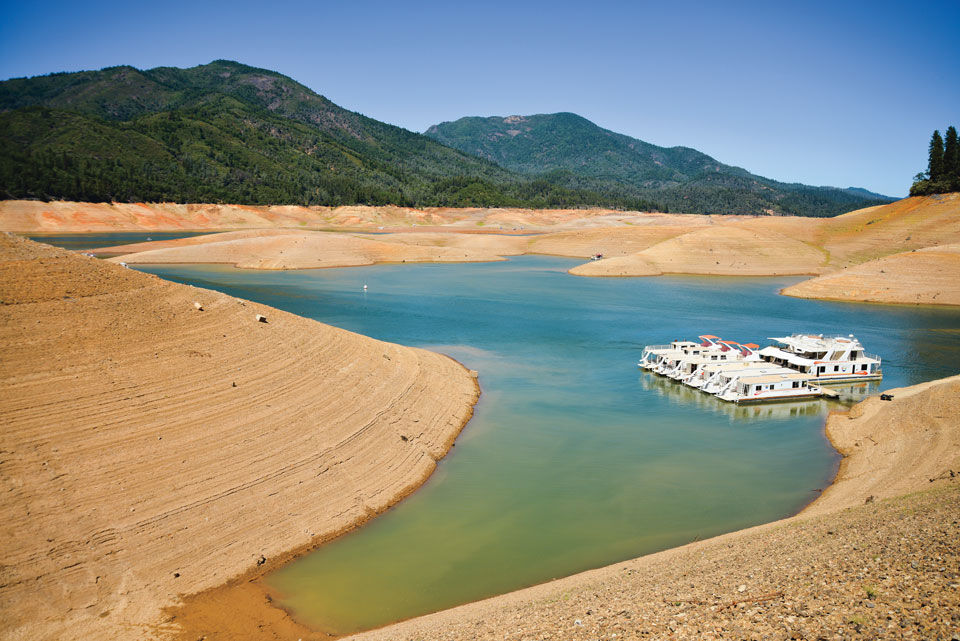 Dwindling reservoirs are just some of the ramifications of drought in California. 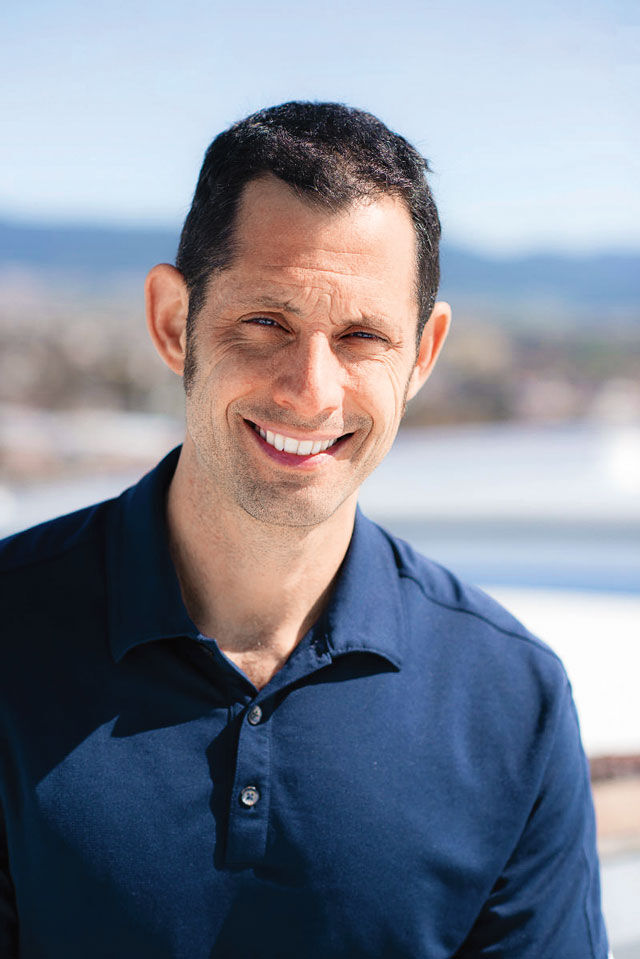 This disquieting year can’t end soon enough, and sadly, we’re far from in the clear. After all, there are still a couple months left to add some more misery to the calendar.

What could make things worse, you may ask? How about a devastating fire season, or not enough rain? Oh, and the looming prospect of a “megadrought” is out  there as well. Thankfully, local fire agencies are working hard to keep the fire danger under control in a season that has already seen historic destructive blazes, and water districts are doing their best to keep the water flowing freely. There are also plenty of steps that the average person can take to help mitigate the problems.

When reports of quick-burning grass fires populate the news and the sky fills with smoke, it seems like there’s nothing we can do to  keep the flames away. However, some preventive steps—from PG&E, fire departments, and local residents—can make a huge difference in getting through fire season safely.

PG&E has admitted responsibility for the devastating Camp Fire in 2018 and declared bankruptcy (emerging from Chapter 11 in July), but the massive utility has also invested in a three-pronged process to do better this time around. The primary goal, of course, is to prevent fires from starting in the first place, and when they happen, to douse them sooner. One major change has been a  PG&E effort to clear space around its power lines and upgrade its equipment; the utility has also significantly expanded its use of wildfire cameras, which are unmanned cameras throughout local suburbs and undeveloped areas.

“Every minute you arrive earlier is a chance to keep a small fire small,” says Steve Hill, public information officer for the Contra Costa County Fire Protection District (CCCFPD). “And with more wildfire cameras, the chances of spotting a problem sooner rather than later increase.”

A major issue during the 2019 fire season was a series of power shutoffs that inconvenienced many and actively endangered some (for example, people who depend on refrigerated medicine), so PG&E’s goal is to have “smaller, shorter, and smarter outages,”  says Jeff Smith, a PG&E spokesperson. To that end, PG&E is  installing numerous sectionalizing devices that will allow the company to cut power to fire-danger areas while still supplying service to areas not at risk.

That’s the “smaller” part; the “shorter” goal is to “re-establish power within 12 daylight hours of an outage,” says Smith. More aerial surveillance of power lines will speed the repowering process, and the new wildlife cameras allow PG&E to move more quickly.

As for “smarter,” Smith concedes that  “everyone is learning. This is going to be  a long-term process.”

Once the fires break out, however, the fire agencies are the first responders, and they are also more prepared this year. The CCCFPD now has two bulldozers it can deploy to create fire breaks, plus support crews for firefighters and enough staff and equipment to pre-position firefighters in areas prone to fire without cutting into existing coverage.

“Pre-positioning really saved us last year,” says Hill. “It allows us to have more resources in place.”

An Ounce of Prevention

A lot of fire danger can be minimized by homeowners and residents performing  routine maintenance to keep their property as protected as possible.

Leslie Krikorian, who lives on a private road in a heavily wooded area of Lafayette, helped organize her neighbors to make their homes safer. “We went through our properties looking for dead wood and low-hanging branches,” she says (both of these can turn a grass fire into a deadly conflagration in minutes).

Those low-hanging branches, especially ones that are close enough to the ground to reach tall grasses, are known as “ladder fuels” and allow a fire to easily jump into trees.  And speaking of trees, dead ones need to be removed immediately. “If a fire hits a dead pine tree, it will explode,” says Krikorian.

“We need to go through our property once or twice a year and trim and cull the trees,” she adds.

It’s also important to “harden your house,” which is fire-speak for using as many  “ignition-resistant” materials on your  roofs, eaves, patios, and siding as possible.  “Ignition-resistant” doesn’t mean the material won’t catch on fire, but rather that embers and small flames won’t suddenly trigger an immediate expansion of the hot spot.

There are other ways that we are better prepared for the 2020 fire season, including having more accurate weather reports and better coordination among the various fire-protection agencies in the state.

One reason people love California so much is for the state’s brilliant sunshine, but too much of a good thing can be a problem.  And lately, we’ve been having more and more of those dry years, which has led climate scientists to believe we may be in the early years of a “megadrought”—which is a pattern of many dry years interspersed with very few wet years.

“This could be the second-worst  megadrought in the past thousand years,” says John Abatzoglou, an associate professor at UC Merced. (The worst megadrought lasted 28 years.) When you couple the rainfall patterns of the past 20 years with increasing temperatures, you’re looking at a future with less water.

Does that mean it’s time to pack up  and move to Seattle? Not quite, though we may have to make some adjustments to the way we live. “Our love of lawns and our water supply are mismatched,” says Abatzoglou.

“We plan for the effects of climate change,” says Andrea Pook, spokesperson for the East Bay Municipal Utility District (EBMUD), which supplies much of the water to East Bay cities. “In the old days, we put all our eggs in one basket,” she adds—referring to the Mokelumne River and the Pardee Reservoir—but now EBMUD is looking in every nook, cranny, and creek for more water.

One success story in our region has been water conservation. Since 2007, population growth in the EBMUD service area has grown by 8 percent—but water consumption is down 24 percent.

EBMUD is looking to partner with the Contra Costa Water District (CCWD),  which serves most of the areas of the  county that EBMUD does not, in expanding the Los Vaqueros Reservoir near Brentwood. EBMUD also has contracts that allow it to buy water from other agencies in the Sierra Nevada and is looking at storing water  underground in the San Joaquin Valley.

In addition, the district is focusing more and more on checking its water lines and distribution system, using everything from acoustic detection to satellite  imagery to find and repair leaks.

Still, consumers hold many of the keys to a water-happy future. Homeowners should regularly check their water lines for leaks, while installing low-flow toilets and  showerheads and high-efficiency dishwashers and washing machines. Aerators on faucets can help as well.

The more ambitious can convert their outside space—which can account for up to 50 percent of water usage in hotter, drier areas—to water-friendly gardens. “If the only time you step on your lawn is to mow it,” says Jennifer Allen of the CCWD, “you might want to think about changing it.”

Swapping spray irrigation for drip  irrigation can dramatically cut outdoor water use, says Roxy Wolosenko of Roxy Designs, a garden design business in  Pleasant Hill. Sprays are inefficient, since not only is much of the water carried away by the wind, they also deliver too much water in too short a time for many local soils to absorb correctly.

Grouping plants by water need also makes sense, as irrigation systems can  be adjusted to deliver more water to an area with thirstier plants while cutting down the amount to those that don’t  need as much.

Another bigger operation is putting in greywater systems, which involve pipes from showers and washing machines to take wastewater into the yard, or cisterns, which store rainwater for future use.  You can even use a swimming pool  as a cistern, and then cover it with  landscaping, which would store up to 10,000 gallons of rainwater.

So, while fire and water concerns are adding to an already stressful year, there are changes we can make at various levels for a better future. This is one fight with 2020 we can win.

What You Can Do

Clean up the yard. It’s all about embers and wind. If a fire is nearby, it creates its own wind and blows embers ahead of it. If your yard has lots of flammable debris lying around—dead tree branches, dry grass, even yard waste—the chances of those embers finding fuel go way up.

Clear your gutters. Leaves and  wind-blown fuel can pile up in your gutters, especially when there’s no rain to wash them away. An ember lands in a gutter full of dry leaves and whoosh!, your roof is on fire.

Spray your roof. Using fire-retardant chemical sprays can make it more  difficult for an ember to catch a shingle on fire. Note, though, that this is not a DIY project.

Upgrade your windows. Dual-pane windows will resist breakage—and keep the flames on the outside—if a fire gets close to the house.

Check for leaks. Turn off all the water in your house and yard, and then look at your water meter. If it’s still moving, you’ve got a leak—and leaks can waste a lot of water.

Low-flow is the way to go. Low-flow showerheads, low-flow toilets, and aerators (which mix air with water as it comes out of the faucet) can make a  big difference—as much as 50 percent savings on inside use.

Think about the yard. Do you have a lawn you look at but never play on? Then maybe it’s time to replace that water-waster with a more water-friendly garden.

Drip, don’t spray. Spray from irrigation  systems, sprinklers, and yes, the hose gets blown away by the wind and also evaporates more quickly than the ground can absorb it.

Editor's note: After this story was published, Leslie Krikorian, one of the sources interviewed, added this comment about a relevant community resource.

Thank you very much for your informative article on disaster prevention and safety strategies published in the current issue of Diablo magazine. Under “An Ounce of Prevention,” I would like to note that Diablo Fire Safe Council (DFSC) was the organization that provided our community with the resources through their cost share defensible space fuel reduction program, that motivated us to organize and work together to create defensible space and reduce the fuel loads both along our road and on our own properties. The DFSC Project increased our awareness of what needed to be done and asked that we work together as a community. They encouraged us with a plan, a way to proceed, and provided grant money that allowed us to hire contractors where needed. DFSC is a strong and positive resource available in both Contra Costa and Alameda Counties. To learn more, visit diablofiresafe.org. —Leslie Krikorian