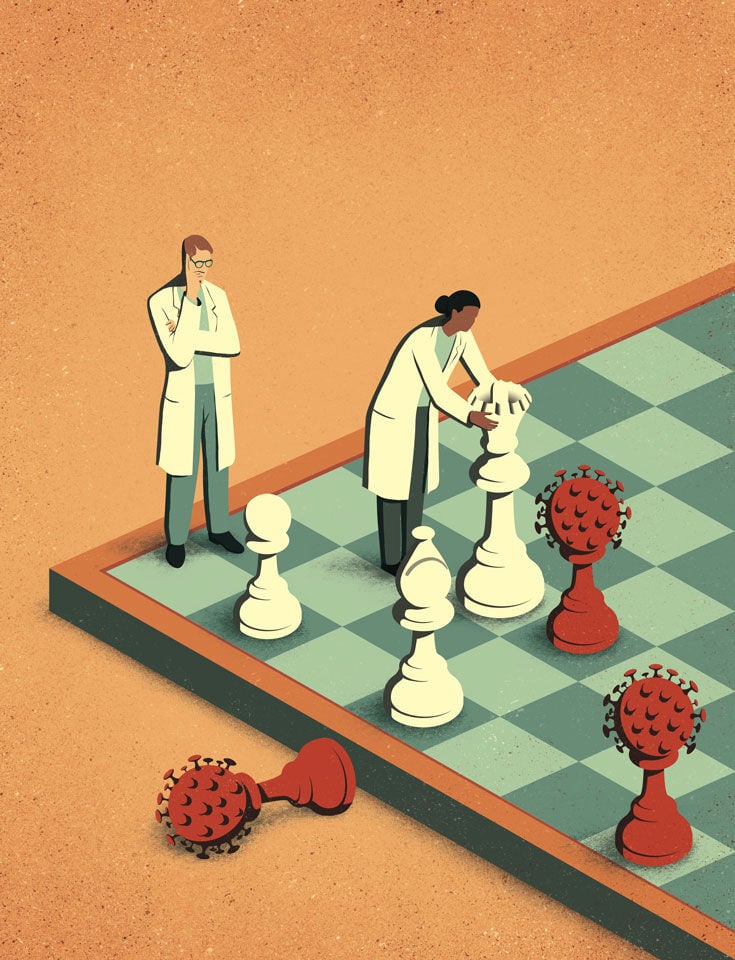 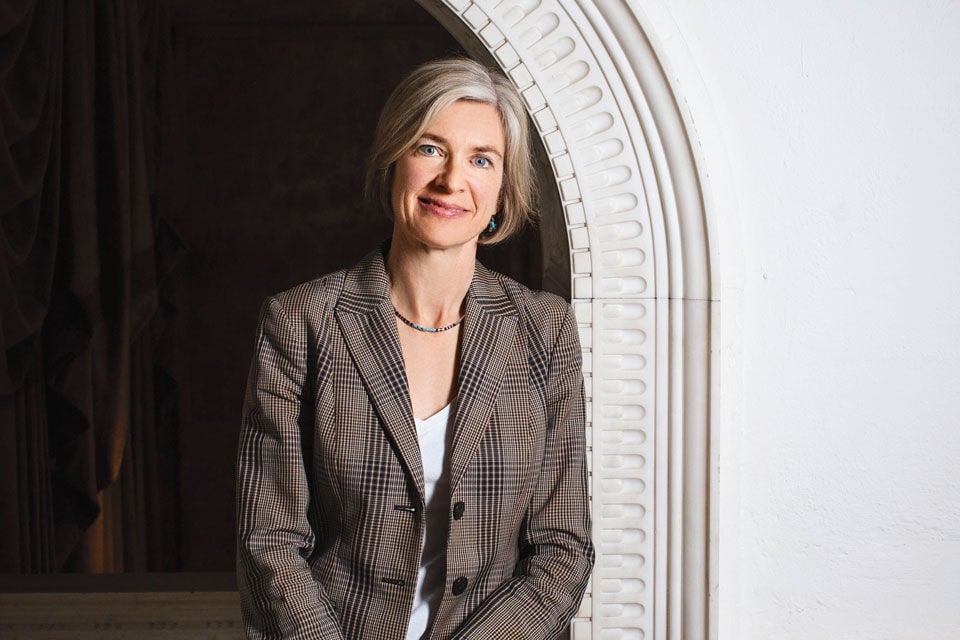 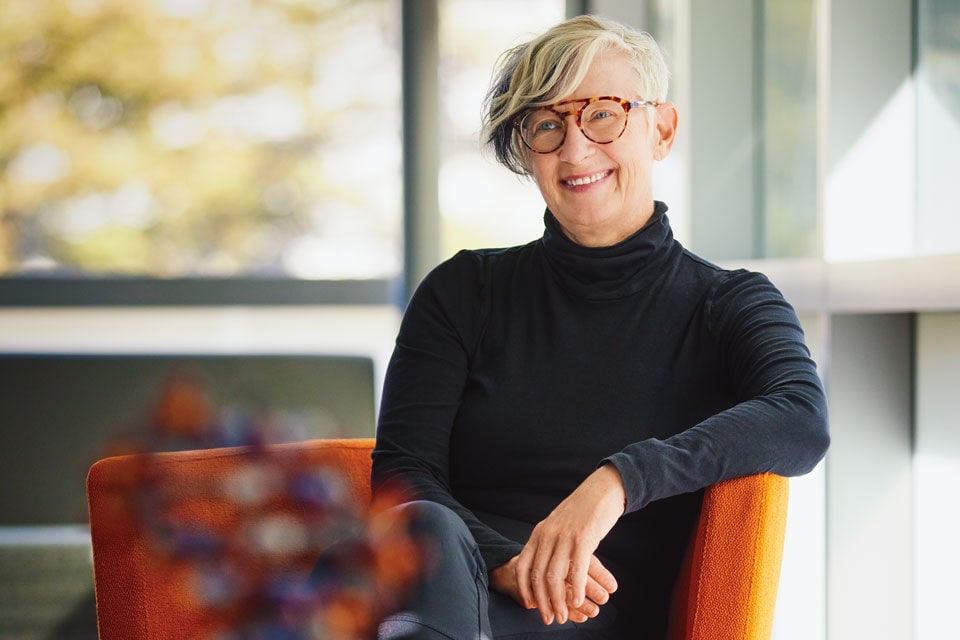 Stacia Wyman leads a team of scientists at the Innovative Genomics Institute. 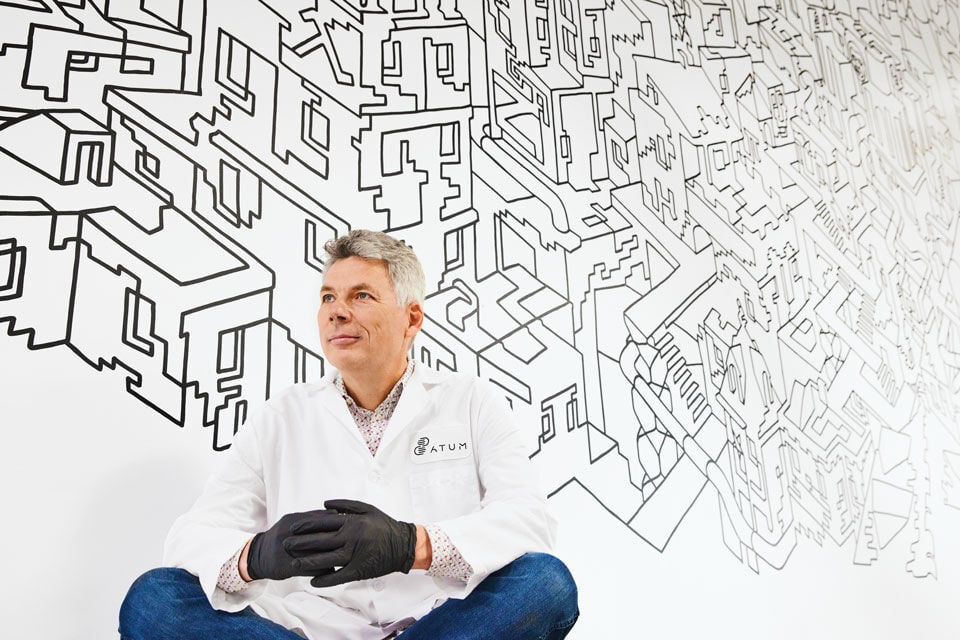 In February 2020, Stacia Wyman,  Ph.D., attended a talk at UC Berkeley by Trevor Bedford, Ph.D., a leading  infectious disease expert. Bedford, who had originally been slated to speak on a different topic, instead focused on SARS-CoV-2, the virus that  causes COVID-19.

“I remember sitting in this room full of people—we were cheek by jowl—and he was saying that this is definitely  going to become a pandemic,” says Wyman,  senior genomics scientist at the Innovative  Genomics Institute (IGI) at UC Berkeley. “That struck me so much. I was like, OK, this is definitely going to happen here.”

Not long after, Jennifer Doudna, Ph.D., executive director of IGI and recipient of the 2020 Nobel Prize in Chemistry, gathered colleagues to brainstorm ways to help. “When it was clear that everything was going to shut down because of the pandemic, I called an IGI meeting to discuss what we could do to best serve the community,” Doudna says. “At the time, there was a serious lack of testing, and we were an institute filled with experts who do genetic sequencing daily—we could go home, or we could set up a testing lab. It was an easy choice.”

With the new testing lab established, Wyman began to look closely at the  results. “I wanted to do some surveillance of the evolution of the virus and its spread by  sequencing the positive samples that came out of the testing facility,” she says. It wasn’t long before Wyman discovered something intriguing. “We had a set of 57 genomes that were identical from campus tests,” she adds. “It turned out that this had been spiked by a party at a Greek house in the early summer.”

The genomes, containing three mutations together, were extremely rare. “We did not see that set of mutations show up in other genomes, which means that it did not spread after the fraternity party,” Wyman says.

This was evidence that the university’s  efforts—including students’ use of a self- monitoring app, testing, and the isolation of those infected—had stopped the genome cluster. “The data tells you a story,” Wyman says. “It’s what I love about my job.”

Wyman is a fierce advocate for pouring more resources into sequencing. Analyzing the virus’s genome not only provides  crucial data for public health strategies and  the design of therapeutics and vaccines, but it can also help identify new strains. And as the virus spreads and mutates, Wyman’s team—which collaborates with researchers around the world—plans to track which vaccinated people might still be vulnerable to COVID-19.

“It makes me so proud to be a scientist, seeing how people have given their time to solving this problem and genuinely came  together to work on it,” Wyman says. “It wasn’t just me who felt like I got a second job. Many, many of us got second jobs.”

For two years, Melanie Ott, M.D., Ph.D., had been working with Doudna and bioengineer Dan Fletcher, Ph.D., to develop an at-home test that would allow people with HIV to measure their viral load. The basis of their test was a revolutionary technology called CRISPR genome editing, the innovation for which Doudna received the Nobel Prize.  Realizing that, with modifications, their HIV test could be shifted to SARS-CoV-2,  the team began working feverishly on developing a test for the coronavirus that could  be done by using an everyday cellphone.

Then, in early March 2020, the lab had to shut down—except for essential research and its COVID-19 work. “Everybody was on edge,” says Ott, director of the Gladstone  Institute of Virology and senior investigator at Gladstone Institutes, in San Francisco. “And everybody worked 24-7.”

For the test, a patient’s nasal swab sample is placed in a device that attaches to a smartphone. If the sample contains RNA from SARS-CoV-2, a fluorescent signal will be emitted. Thanks to Fletcher’s  pioneering technological work, the smartphone essentially becomes a microscope, detecting the fluorescence to report a positive result. “The mobile phone technology that is basically in everybody’s hands is  a high-quality diagnostic,” Ott says.

Pinpointing the patient’s viral load can be especially helpful. “We know that people with a higher viral load are getting sicker and are potentially more infectious,” Ott says. Multiple tests over time might reveal whether someone is at the beginning or end of an infection; the test might also provide insights as new variants of the virus emerge.

“There are multiple cure efforts going on, but in order to make this successful, people have to constantly check their viral loads,” Ott explains. “There’s a real need to make this more accessible and easier.” The team hopes to work on similar tests for future  applications. Ott adds, “A combination of testing, vaccination, and vigilance in the future will hopefully help us to not repeat this.”

When David Ludvigson’s mother moved into an assisted living facility, he asked about its COVID-19 testing process. Staff and residents’ samples were sent to a lab, he learned, with results coming back two or three days later.

“When you’re dealing with a critical infection, two to three days make for very difficult patient management,” says Ludvigson, CEO of Nanōmix, a developer of mobile diagnostics in Emeryville. “We said, why wait two to three days? Why not wait 10 or 15 minutes? Then you know exactly what to do with that patient at that point.”

Nanōmix has expertise developing quick, highly accurate diagnostic tests. In 2014, as Ebola spread in West Africa, Nanōmix helped to develop a prototype system to identify Ebola via a 10-minute blood test. “We knew that our system would work well with highly contagious viruses,” Ludvigson says. “And we had some confidence that we could do rapid product development,  because we had done it in the past.”

With a platform already in place, Nanōmix had a significant head start. It developed a 10-minute blood test to detect the presence of antibodies in people who’ve  recovered from COVID-19. It also developed a 15-minute nasal swab test for detecting the active virus in symptomatic people.

In both tests, the patient’s sample is put on a single-use cartridge, which is placed into a handheld reader. “You get an answer, positive or negative,” Ludvigson says. “And the person doing the test does not have to be a trained medical person.” So the technology can be used nearly anywhere—in an  ambulance, an assisted living facility, or  your local pharmacy—with results being  sent via Bluetooth to whoever needs them.

Recently, the company completed the FDA filing for its antigen test, which was named a finalist in the Xprize Rapid COVID Testing competition. “People were excited to work on potential products that could help,” Ludvigson says. “Now [we’ll be] shifting to the next challenge, which  is producing and delivering a lot of product. The challenges don’t end.”

SEARCH FOR A CURE

“Even with vaccines, there is always a portion of the population that will still get  infected,” says Lightstone, the group lea- der in LLNL’s Biosciences and Biotechnology  Division. “So having an antiviral after the  infection is still going to be necessary.”

Lightstone and Allen are contributing a key piece to the puzzle. Harnessing the power of super-computing and artificial intelligence, they’re virtually screening millions of molecules that may have antiviral properties to help speed the drug design process.

In experiments conducted in collaboration with Sandia National Laboratories, they’ve seen promising initial results. “At the lab, there’s a lot of historical work on infectious disease and understanding viral evolution,” says Allen, who is the project leader in LLNL’s  Global Security Computing Applications  Division. “This pandemic has brought home the importance of the work we do here  for the team [who’s] been working on this.”

While researchers like Allen and  Lightstone help unlock the mysteries of SARS-CoV-2, a local life sciences company is providing the biotech community with some of the raw materials needed to do their work.

When the original SARS-CoV-2 genome sequence became public, scientists around the world were desperate for copies  of the genes and proteins that guide the  malevolent virus.

A flood of these requests hit Atum, located in Newark. “We saw, within hours, rush  orders for making small pieces of the COVID virus,” says Claes Gustafsson, Ph.D., Atum’s cofounder and CCO. “And we were eager to move things forward as quickly as possible.”

Previously, in the era of polio and small pox, scientists used the physical virus in their labs—which could be dangerous. But now, companies like Atum build synthetic genes and proteins from scratch to help scientists quickly develop vaccines, therapeutics, and diagnostics. “When this whole mRNA technology came out of Moderna and two other companies and ended up becoming the vaccine for COVID, very rapidly we had requests to see if we could build similar things,” Gustafsson says. “So we’re always sort of sitting at the cutting edge, which is a very interesting place to be.”

Today, Atum has contracts with roughly  50 companies around the world doing work related to COVID-19. “As individuals,  we’re helpless when it comes to curing or vaccinating against COVID,” Gustafsson says. “But as a small cog in this big machine, there are some pretty amazing things we can do.”

In early 2020, as hospitals filled with patients, health-care workers were running short of everything from personal protective equipment (PPE) to ventilators. As the media reported the dire situation, Jack Kotovsky, Ph.D., micro and nano technology section leader at LLNL, was feeling restless. “I felt like it’s the job of our lab to  respond,” he says. “It felt very upsetting, as an engineer, to not try to find solutions. Either I wanted to build ventilators or make toilet paper.”

Since ventilator design was more in Kotovsky’s wheelhouse, he assembled an ace team to design one remotely. “We are well suited to respond to  unusual problems given our brain trust,” Kotovsky says. “We are generally building and improving technologies in our lab that involve diverse teams from physics and engineering and biosciences and pure sciences.” Within two weeks, 20 experts from different disciplines had rallied.

With the demand for ventilators, one concern was that traditional supply chains would be overwhelmed. So the team aimed to create a simple ventilator made from readily available parts that weren’t part of the traditional  supply chain. One team investigated  options—including CPAP parts and scuba gear—while another team brainstormed designs. The team worked 18-hour days, seven days a week—and managed to  design their ventilator, test it, and submit it to the FDA within just five weeks. Kotovsky says the Department of Energy freed up funding support quickly and FDA approval took a few months, rather than a couple of years.

Soon after, Kotovsky’s team formed partnerships to build thousands of lower- cost ventilators weekly. “It was a joy and a pleasure to work on this,” Kotovsky says. “It felt good to be proactive.

“The pandemic became a global,  unifying endeavor, where everybody was affected across the planet,” he adds. “It felt good to be united against something that was a threat.”