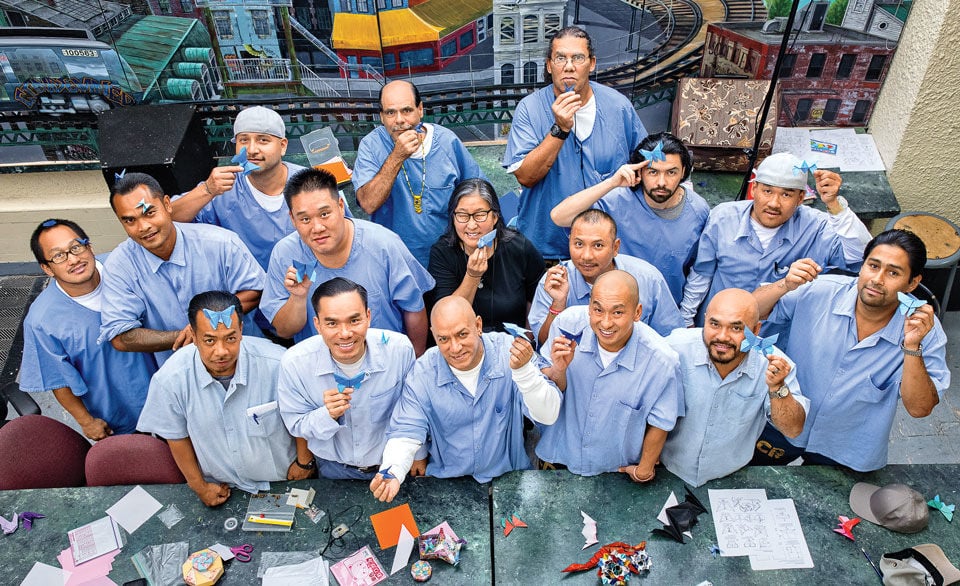 Jun Hamamoto (center) and her students in San Quentin show off the butterflies they made.

Jun Hamamoto arrived at San Quentin State Prison eager to share photos of her trip with some of the incarcerated men. She had been to a conference in Japan, held in honor of Hiroshima and Nagasaki days. A memorial at the event included 4,000 folded-paper cranes—symbols of peace—that the San Quentin inmates had made. Hamamoto had hand-delivered the cranes to a hibakusha group, survivors of the bombs. "That was very powerful," she says. "And the men were so happy to see the photos."

A practicing Buddhist and adviser to the Mindful Peacebuilding organization, Hamamoto is a scientific engineer at Lawrence Berkeley National Laboratory who was teaching math at San Quentin when she began folding cranes for the World Tree of Hope in San Francisco. She invited the men in the prison’s Kid CAT group—inmates who received life sentences as juveniles—to contribute to the tree. "They were so enthu­siastic," she says. "They folded cranes and wrote messages of hope."

Soon, other men at San Quentin wanted to learn origami too, so Hamamoto began holding workshops. "They found that folding origami was relaxing—kind of meditative," says Hamamoto, an Albany resident. Origami promotes focused-attention meditation, in which the mind is trained on a task, which has been shown to bring calmness.

Since Hamamoto began teaching origami there four years ago, San Quentin inmates have created tens of thousands of peace cranes, butterflies, hearts, and flowers for social justice causes. "It gives them a sense of belonging, giving back to communities that they had possibly harmed in the past," she notes. "It was much more powerful than I had anticipated."

Some of her students have been released and now teach origami with Hamamoto at events. Reintegrating into society comes with challenges, but they know they can turn to origami. "They’ve told me they fold to relax," she says. "It’s remarkable how much it’s helped them to de-stress."

Artist Bernie Peyton also believes in the transformative power of origami. While volunteering at UCSF Benioff Children’s Hospital Oakland one day, he spotted a patient who had been shot in the head. Withdrawn, the child wasn’t speaking to anyone. "I said, ‘I’m going to show you what you can do,’" Peyton remembers. And, fold by fold, he taught the boy origami.

"He folded one of the more complicated figures," says Peyton, who lives in Berkeley. "This medium … can change people’s perception of what they’re capable of." Experts say that origami builds cognitive and emotional resilience by engaging problem-solving skills, and can help kids better deal with overwhelming situations.

Peyton has logged nearly 1,600 hours teaching origami at the hospital. One boy, who was battling cancer, liked Pokémon, so Peyton designed an origami Pokémon fish for him. "He put it on his head like a hat and went parading around," Peyton recalls. "It totally transformed his day."

Peyton says origami transports young patients to a world away from their pain and worries. "It’s magical," he says. "You fold a square piece of paper into the most magnificent, colorful, fantastically creative things. … It’s great therapy for cerebral palsy patients, who get so much better at everything. They become some of my best folders." In fact, occupational therapists, psychologists, doctors, and nurses use origami to aid patients around the world.

When Peyton learned origami at age 9, it helped him better cope with his own dyslexia. "I learned that you could break down a complex problem into small, achievable steps and it makes things much easier," he says. "I credit all my degrees to origami."

Among those degrees is a Ph.D. in zoology from UC Berkeley. He returned to origami in the 1990s after a shoulder injury cut short his field research on bears in Peru. His work was recently showcased at a major museum in Taiwan, in collaboration with 60 other artists. "We had foldable microscopes, artwork, fashion design—all origami," he says.

These days, Peyton is experimenting with folding extra-large paper sheets, as well as making pieces that tell a story. To express humanity’s impact on the environment, for example, he created an origami vignette that includes a rock sporting a big eyeball that opens. "I’d never folded a rock with an eyeball," he says. "But it was really fun!"

As a kid, Robert Lang was drawn to origami for its puzzle-solving aspect. "When you finished, you had a neat little toy, like an animal," he says. "If I wanted to change the position or add some features to it, I could get another sheet of paper and try it again."

Ever the logician, he settled into theoretical modeling of lasers and optoelectronics in grad school. Later, while working as a physicist at NASA, he engineered folded structures that could fit into a cylindrical rocket. Now Lang—who lived in Pleasanton in the 1990s and then in Alamo until 2019, before moving to Southern California—is one of the world’s preeminent origami masters. "I used the tools of math to accomplish the goals I wanted to accomplish artistically in the world of origami," he says. His extraordinary designs range from a brown widow spider, to an otter, to decorative pots.

As he has evolved his techniques, he’s been able to create complex patterns in which the folds work together, creating intricate shapes. Meanwhile, he’s experimenting with curved folds, which can be especially challenging.

"Origami can be stressful if you’re working at the edge of your abilities and trying to push yourself," he says. "On the other hand, if you have stresses in another part of life, origami can absorb your attention in such a way that it takes you away from that stress."

One of his latest pieces is a greater kudu, an African antelope. "It has a mathematically beautiful flow in how the folds come together," he says. "And I think it cap­tures the character of the subject pretty well."

Grab some colorful paper and get folding with the help of these local resources.

This Berkeley-based entertainer does live origami performances at events. He’s written three instructional books about origami and teaches the craft on his YouTube channel. jeremyevents.com.

Taro’s recently shuttered its Oakland location, but you can still take its online classes and buy its curated Japanese papers. tarosorigamistudio.com.

Kids can contribute to this initiative, launched by two East Bay schoolgirls, to create thousands of origami butterflies in support of the immigrant children and families being held at border detention centers. butterflyeffectmigration.org.

Every August, origami lovers convene at this festival in San Francisco’s Japantown, where you can see head-turning origami creations, watch experts at work, learn new folds, and enter contests. japancentersf.com.