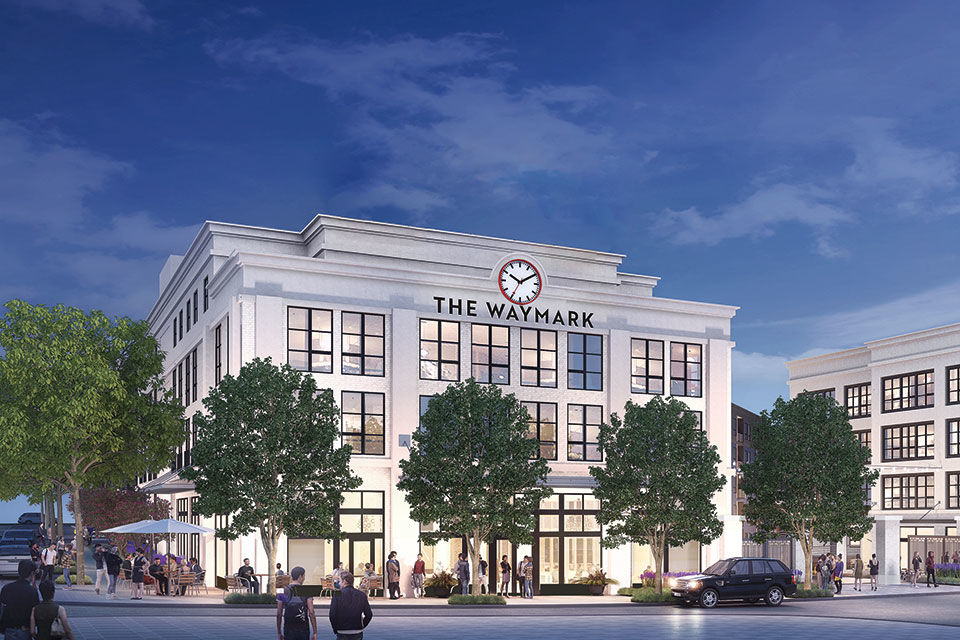 A rendering of the Walnut Creek Waymark apartment building. 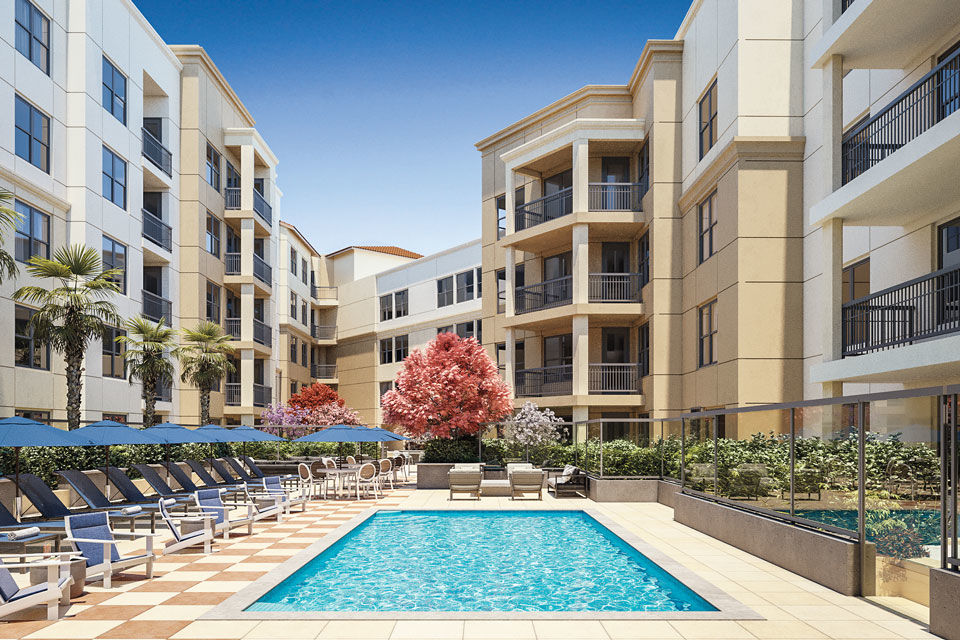 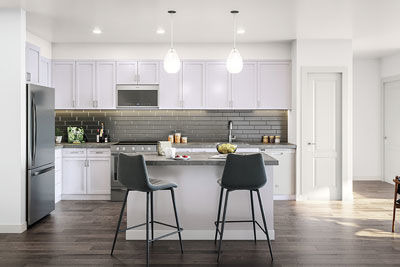 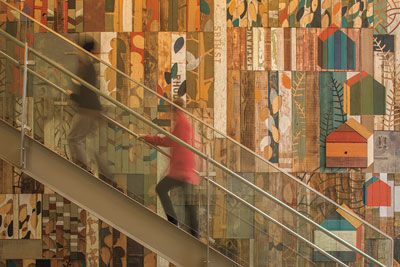 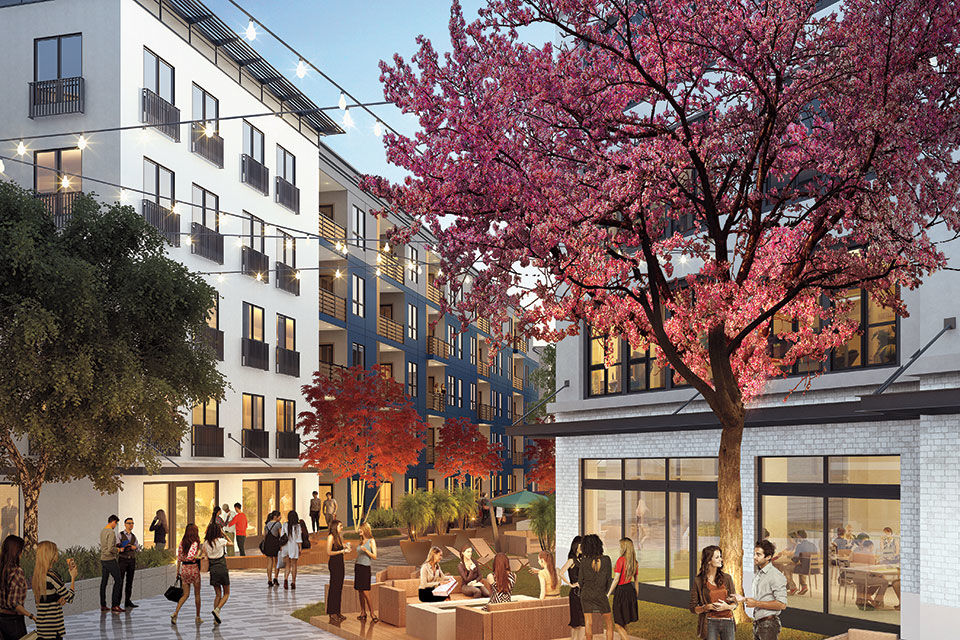 Set to be completed in 2021, the Walnut Creek Transit Village will contain public plazas. Courtesy of Blake Griggs Properties. 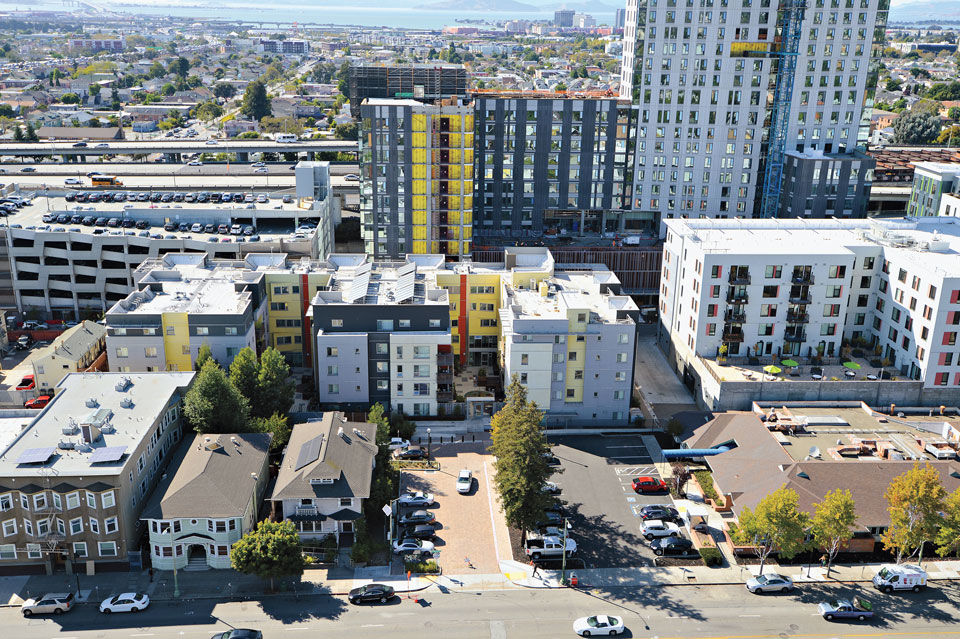 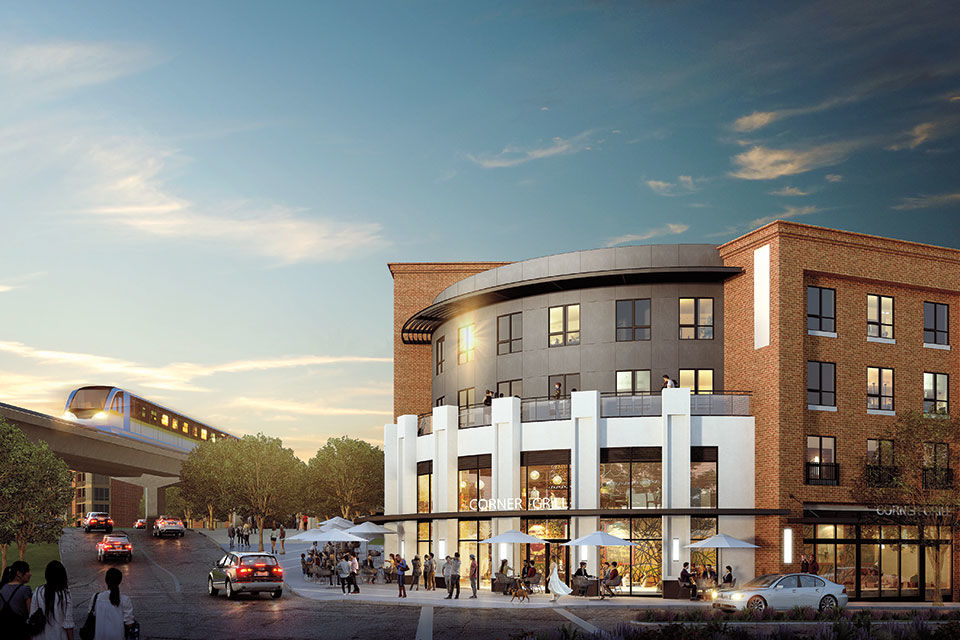 The mantra among many local city planners is: "Get people out of their cars." And if you care about climate change, or simply spend hours in heavy traffic on the freeway, you’re probably reciting it, too.

One solution to our region’s automobile addiction and regular commuting nightmares—not to mention the housing shortage—is building apartments and condominiums as close to mass transit as possible. Across the East Bay, residential complexes have been erected on BART-owned land at 11 stations; three BART housing projects are under construction, and seven more are in the planning stages. According to the American Community Survey, which is derived from United States Census Bureau data, this is a very good thing: People who live within half a mile of a transportation hub are two to three times more likely to walk, bike, or take mass transit to work than those who live farther away.

Unfortunately, the sprawling geography and varied character of the suburbs east of the Caldecott Tunnel make this an imperfect solution. Yes, people who will live in the 600 new apartments at the upcoming Walnut Creek Transit Village, for example, could conceivably get around without even owning a car. But what about the residents of Walnut Creek or adjoining cities who live far away from BART and need to drive there and park in the morning before boarding a train?

Supporters of the Walnut Creek Transit Village point out that the local BART station now has 120 more parking spaces than were there before an accompanying BART garage was built last year. Yet even that number of parking spots is not enough. When 794 monthly permits were offered several months before the garage opened, they were snatched up in one week, leaving thousands of would-be BART commuters on a waiting list with no guarantee of being able to find a parking space before work.

How many of us have arrived at a BART station in the morning to discover that no parking spots were available, so we simply headed out to brave the freeway? Without a more extensive and convenient bus or shuttle system to bring passengers to the BART station, commuting by mass transit in this area can be tricky. In general, local buses have too few routes and are too infrequent to help most suburban commuters.

At the same time, some in Walnut Creek argue that establishing housing at BART stations is a one-size-fits-all approach that sometimes doesn’t mesh with the other needs of the community. More than 70 percent of Walnut Creek’s 33,000 employed residents leave the town each day to work elsewhere in the Bay Area, according to city officials. The BART trains departing from Walnut Creek during morning rush hour have been overcrowded—standing room only, in fact—since train service was extended to Antioch in 2018. Adding more housing at the station will only increase the number of riders who are going off to work out of town.

Some in Walnut Creek would prefer to see more office space and other commercial development near BART in order to help residents of Walnut Creek work in their own community. The Walnut Creek Transit Village includes 27,000 square feet of retail space, not office space, and that is a mere fraction of the 16-acre multistory community.

"It’s just more housing for people to get on an impacted system with problems that BART isn’t going to take care of for the next 20 or 30 years—until they build a second trans-Bay crossing to accommodate more trains," says Matt Bouyea, a member of the advocacy group Walnut Creek for Controlled Growth. "What we need to be asking is: How can people live and work here in Walnut Creek?"

Neighboring communities have wildly varying visions of what they want built near BART access points. Dublin and Pleasanton have gone for 505 apartments on BART land at one of their stations and 309 apartments, a 410,000-square-foot mega development (the Workday world headquarters), and an upcoming high-end hotel, retail space, and conference facility at the other. In Lafayette, a group called Save Lafayette is vehemently opposing a state legislation that allows BART to construct housing on land the transit agency owns, including its parking lots, theoretically without approval of the community itself. And city officials aren’t keen on the idea of building housing at Lafayette BART, either.

Abby Thorne-Lyman, BART program manager for transit-oriented development, has said the agency will hold off on erecting housing at the Lafayette BART station. "We met with the Lafayette City Council [in early 2019 ] … and have received feedback that they are not interested in BART pursuing development," she tells Diablo. "[M]any other cities would very much like to partner with BART on a project. … There is no reason for BART to pursue development with cities that are not interested in it."

As we all know, housing is in such demand in the Bay Area that prices have skyrocketed beyond the reach of many residents. Statewide estimates from 2017 say we need to build 180,000 new housing units per year to stabilize prices, but on average, less than half of that has materialized in the past 10 years, and state legislation is compelling communities to build more. Commuters in the Bay Area are traveling farther and farther away to find a relatively affordable place to live. Meanwhile, even families who are comfortably settled in Walnut Creek, Lamorinda, and Danville see that their kids often can’t afford to rent an apartment in the Bay Area.

Considering such concerns, adding housing close to BART stations feels like a reasonable, if not always ideal, way to do infill development in communities otherwise known for their extensive single-family homes. "It doesn’t change the look and feel of the neighborhoods that are surrounding it," says Walnut Creek City Mayor Pro Tem Kevin Wilk. "And when people see that residents of that housing can get to work without clogging the roads, they understand that."

Here’s the current status of some of the projects going up—or already completed—on land adjacent to BART stations.

Overview: This 16-acre development situated on a former BART parking lot contains 596 apartments and 27,000 square feet of retail space; it will be one of the largest BART-adjacent communities of its kind.

Affordability: There are no "affordable" units in the village, but the developer paid $7 million to the city to help subsidize other affordable housing projects.

Rents: Expected to be announced in 2021.

Timeline: The transit-adjacent housing and commercial complex was approved in 1983.

Affordability: 84 of the completed apartments are designated as affordable housing.

Amenities: Swimming pools, a fitness center, firepits, and outdoor kitchens are currently there; a clubhouse, community room, rooftop lounge, and pet spa are under construction.

Timeline: The first phase of development has been completed on the Dublin side of the West Dublin/Pleasanton station; it includes 309 apartments.

Overview: The Workday world headquarters opened last year on the Pleasanton side of the station, with about 410,000 square feet of office space. Future phases will bring an upscale hotel, retail spaces, and a conference facility.

Affordability: None of the housing is deemed affordable.

Parking: The station opened in 2011 with two BART parking garages, which offer 1,190 spaces in total. No additional parking structures have been built.

Timeline: The development was completed in 2011.

Parking: BART’s surface parking, encompassing 850 spaces, has been consolidated into a seven-story replacement garage with 1,513 spaces.

Timeline/overview: BART has selected a developer for this project and will begin negotiations to build 360 residences and 800,000 square feet of commercial space on land that is currently mostly used as parking for 1,977 cars.

Affordability: About 25 percent of the units will be designated as affordable.

Many projects are in various stages of development at Berkeley and Oakland BART stations. Here’s a quick snapshot.

In 2016, BART classified its eight-acre site around the station in a residential neighborhood as a "city center," meaning that new housing must contain at least seven stories, according to a state law signed in 2018. The city of Berkeley and BART have agreed to start planning for up to 750 apartments. Supporters are displaying yard signs that say, "Let’s build paradise instead of a parking lot." Opponents fear the neighborhood will be overwhelmed by the high-density development.

In September 2018, a plan was announced for a new development that will include a pair of high-rises—one 27 stories and the other 21—containing 519 apartments (44 percent of them affordable) and 517,000 square feet of commercial space.

A developer has been working on a concept that would add up to 532,000 square feet of office space, 837 units of housing (29 percent of them deemed affordable), and 75,000 square feet of retail space. A preliminary plan has been approved by the Oakland Planning Commission.

The Coliseum Transit Village project includes 110 apartments, with 50 percent of them designated as affordable units.

At the same time that housing is coming to existing BART stations, the transit agency is expanding its service to reach more communities. Take a look at BART’s plans for growth in the East Bay.

By later this year, BART will extend south past Warm Springs Station in Fremont, according to the Valley Transportation Authority, which built the extension to be operated by BART. The line addition will include a stop in Milpitas and then end at Berryessa, in north San Jose.

By 2030, BART will go from Berryessa to four new stations: 28th Street/Little Portugal, Downtown San Jose, Diridon Station, and Santa Clara. Also, an Irvington station will be added between the Fremont and Warm Springs stations.

A BART extension to Livermore was voted down by BART in 2018, and funds for the extension were given to the Tri-Valley–San Joaquin Valley Regional Rail Authority. For now, the goal is to initiate Valley Link train service between Livermore and the Dublin/Pleasanton BART station by using a historic Transcontinental Railroad right-of-way easement.