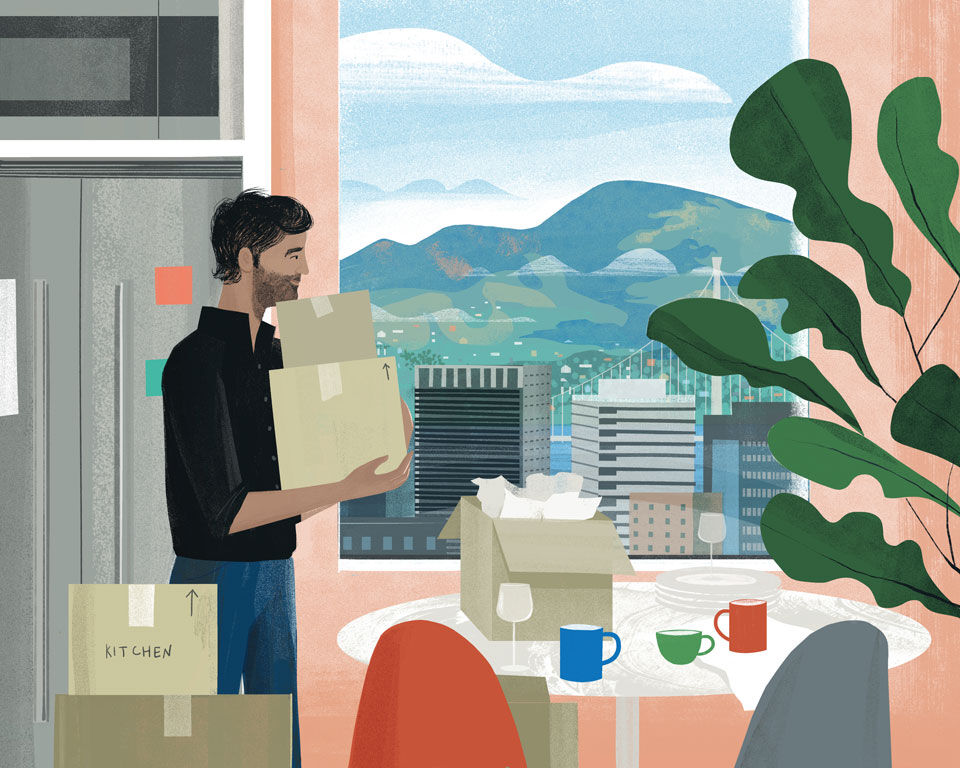 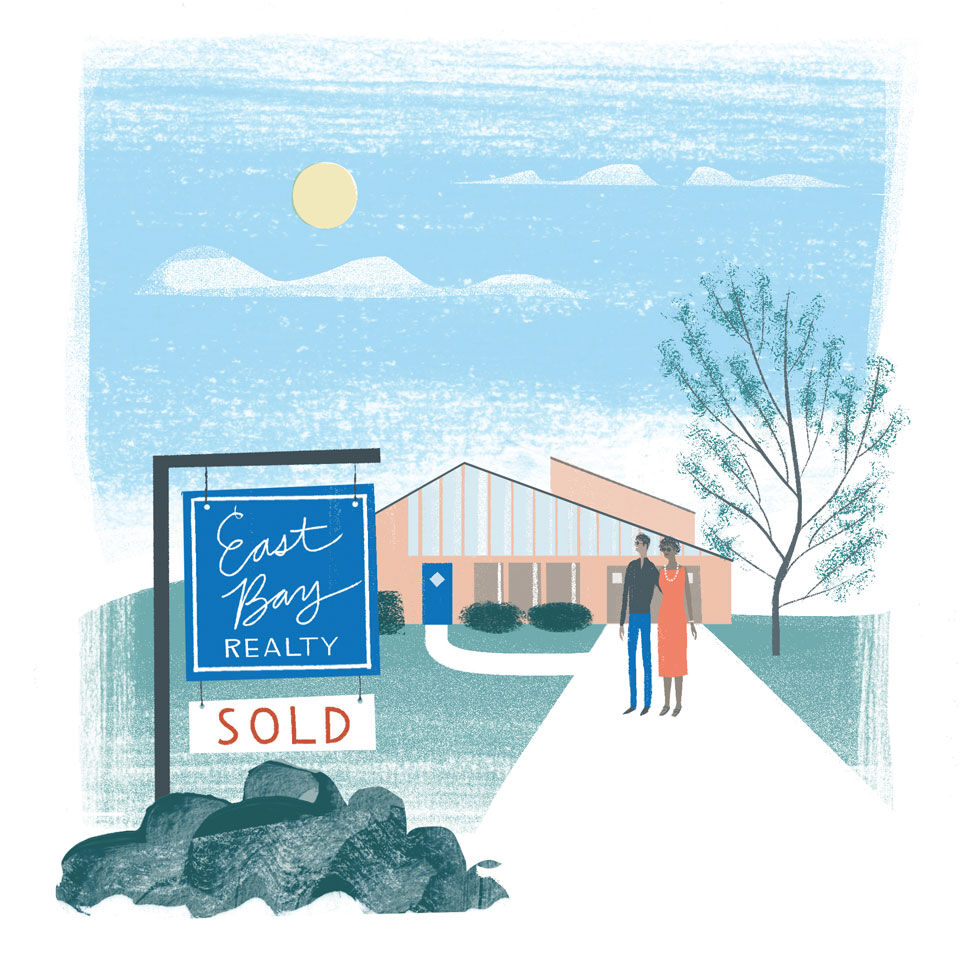 Sometimes, being a homeowner  seems like more trouble than it’s worth.

Now is not one of those times.

Sure, the roof still needs to be  replaced and there’s a plumbing issue, but a quick glance at Zillow will ease the pain of the inevitable costs of home ownership, especially  in the suburbs. And sure, prices go up and prices go down, and there will be a slump somewhere down the road, but there are fundamental forces at work that are changing the way real estate is valued. Some of those forces are societal, some are technical, some are work-related,  and some, of course, are driven by COVID-19.

All of them, however, are  pushing suburban prices up, up, and up some more, and in the  crowded, tech-driven, prosperous  Bay Area, a change in direction anytime soon seems unlikely.

“Somebody told me five years ago the real estate market was  going bust, but I’m still waiting,” says Harry Murray, the vice president of experience in Sereno’s office in Danville.

“Our business is crazy,” he adds. “It’s insane—there are multiple  offers on everything.”

Julie Del Santo of Dudum Real Estate Group notices the same thing. “We saw some strength in the market earlier  [in 2020 ], but a perfect storm [made] it explode.”

Part of that storm is the pandemic, but the coronavirus may not have changed the way Americans live as much  as it accelerated changes that were already in the works.

For example, the tools for working from home were  already available in January 2020. Internet connections  were better than ever, laptops and PCs were cheaper and more reliable, and apps like Zoom were already  robust and ready to expand.  So when the pandemic hit, the pieces were in place for  people to efficiently work  from home if—and it’s a  big if—they had the space.

Lutjon Celkupa and his wife, Hannah, for example, were  living in a 700-square-foot apartment in San Francisco. He’s in the investment industry, and she works in health law. They enjoyed the city life, but once the pandemic  arrived, they were suddenly both working from home.

When that happened, it was the tipping point, and not just for them. Many city residents looked for an exit strategy.

In August, they pulled the trigger and moved to Walnut Creek. “It’s nice to have more space,” says Celkupa. “We got a  puppy, and I work outside”—two things that weren’t going to happen in the city.

The lifestyle is different as well,  especially the access to the outdoors.  “Walnut Creek has so many parks and trails,” says Celkupa. “You can look over the whole valley. It’s so cool.”

But more space affects more than a home office. “It’s not just a matter of working from home,” says Del Santo. “We’re spending more time at home.” And, as we all know, there are times when togetherness is a tad overrated.

It’s important to note that not all suburbs are created equal. “You get a whole lot more house in Danville than in Los  Gatos,” says Murray about the upscale  Silicon Valley suburb, and the same is true for the residential areas of  Oakland and Berkeley. “Here, in a place  like Danville, you get double or triple  the square footage for the same price.”

Lena Hart, who moved to  Walnut Creek from Berkeley with husband Joe Brunicardi, agrees. “The schools are way better [in suburbia],” she says, but there are also other advantages. She teaches the  Alexander Technique, which promotes healing through body work, and in the suburbs she has enough space for a studio at her home. “I don’t think that would be possible in Berkeley,” she says.

When she and her husband started looking east of the tunnel, there was a bit of sticker shock. “It seemed a little pricey,” she says, “but the houses were way bigger.”

“People need more space,” says Murray. “They want the luxury of elbow room. They don’t want to be stuck in an apartment building.”

“I really love having a yard,” says Hart. “I don’t see us moving back to a city.”

And speaking of selling, there hasn’t been a better  time to sell in quite a while.

BUYERS ON THE MOVE

Jarvis Team, like many businesses, was shut down in March  2020, but once the group was  allowed back to work, “it was on fire,” Jarvis-Diebner says. “It went warp speed with no warning. My business has doubled or tripled. We’ve got lots of San Francisco, Oakland, and South Bay buyers.”

“You usually have spring madness,” says Del Santo, but by June, “something clicked.”

“Everyone was buying,” she continues. “It was almost contagious,” and the result is not only multiple offers, but offers way over asking.

“We had a $4.2 million house that sold for $5 million,” she  says. “That’s a big number.  People are going over by half  a million dollars. That’s the  price of a home in another city.”

And speaking of other cities, even areas not usually associated  with housing booms are seeing record prices.

“We have a Brentwood  office,” says Del Santo, “and those agents were having their best year ever by October.”

“More affordable markets are extremely hot,” says Carlisle. “People are seizing opportunities due to low interest rates. Loans are free money right now, and the difference in cost for  a mortgage is enormous.”

Vince Wirthman, a loan advisor for RPM Mortgage in Orinda, details the difference. In October 2018, with interest rates at 4.75 percent, an $800,000 30-year mortgage would result in monthly payments of $4,173. Two years later, the rates were at three percent, which means the payments were $800 less each month, or nearly $10,000 a year.

“Your buying power goes up exponentially when rates are low,” says Wirthman. “A lot of people were sitting on the fence, thinking they’d move five years from now, but these rates are so low, it makes financial sense now. And a lot of people just want to get out of the city.”

Carlisle sees the same thing. “There’s no doubt there’s a migration,” he says, which is good news for prospective sellers.

At the same time, though, some sectors of the real estate industry are hurting.

“The condo market is still moving [in the suburbs],” Del Santo says, but the smaller condos—one or two bedrooms—aren’t doing  as well.

Many condos have been  built in or near transit  villages, which were supposed to take advantage  of proximity to BART.  That would make it easy  for condo owners to  get to San Francisco or  Oakland without the hassle  of having to drive on crowded  freeways. However, now it  looks like businesses may never  get back to the five-days-a-week-in-the-cubicle mode, even when the pandemic has passed.

Jena Domingue, a lifelong Bay Area resident, took that logic to its extreme last year. She works for WineDirect, based in Napa County’s American Canyon, and commuted every day.

“I was ready to spend over a million dollars on a house, but there wasn’t anything I fell in  love with,” she says of her East  Bay search. Then, due to COVID,  she started working from home.

“I had worked at the office every single day,” she says, but she soon realized she was more productive at home. She didn’t have to drive to and from work, nor did she need to spend time getting ready for the office.

The next realization came in the form of a question: “Does it matter how far away I am? I always said I would never leave California,” she says, but now she lives near Las Vegas. Her million dollars bought her a lot more house, and she can make occasional trips to the main office. “I don’t see us all working in one building at one time anymore,” she says.

And she’s not alone. Jarvis-Diebner has noticed “a lot of clients leaving California  because of the craziness. They’re out of here.”

“I had four sellers move to Idaho in one week,” says Del Santo.

But why does this exodus make a difference to the real estate market? Because if  people weren’t moving out of the suburbs, there would be no houses for realtors to sell. Cities that are mostly built out—which  includes most of the suburban cities in this area—are forced by state law to focus on  expanding affordable housing, not spacious  single-family homes, so the inventory of those desirable, spacious single-family homes is not going up. This means that those ready to move not only can find something a lot cheaper the further inland they go, but they’re also getting a lot more money for the house they already own.

“Real estate has been a spectacular generator of wealth in the Bay Area,” says Carlisle. This is true especially in the suburbs, where that trend seems destined to continue. So the next time the gutters need to be cleaned or the lawn needs to be mowed or the chimney has to be repaired, there’s an easy way to ease the pain: Just go online and compare the amount of the mortgage to the price it will bring on the open market.

And start up that mower with a smile.