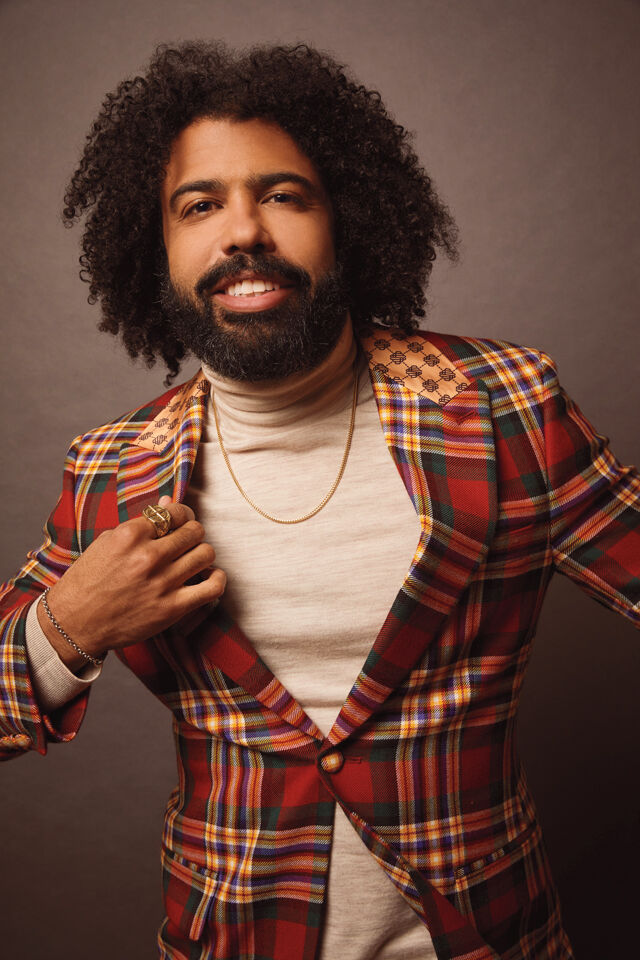 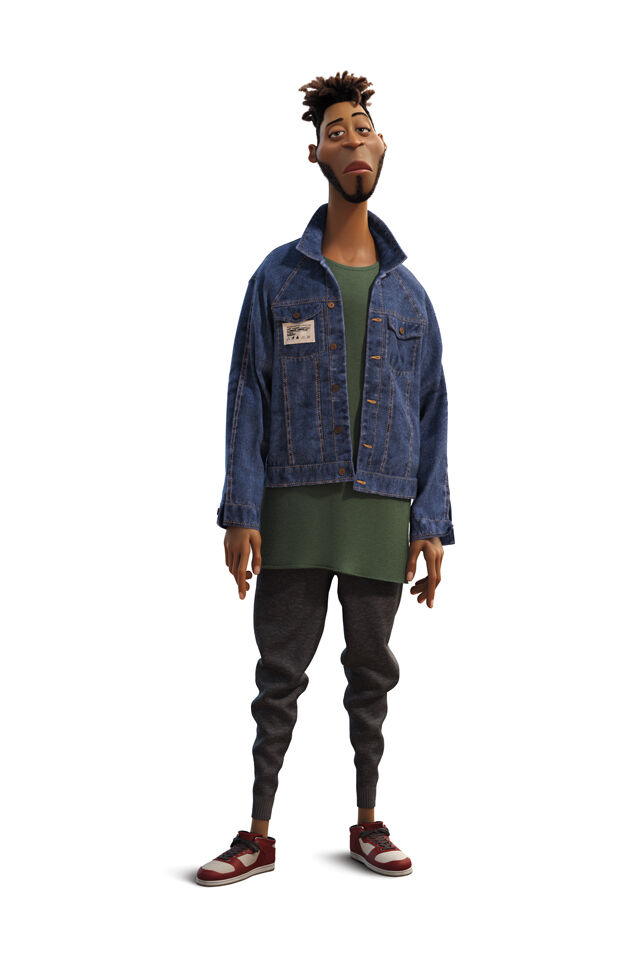 Daveed Diggs lends his voice to the character of Paul in Pixar’s newest film, Soul. 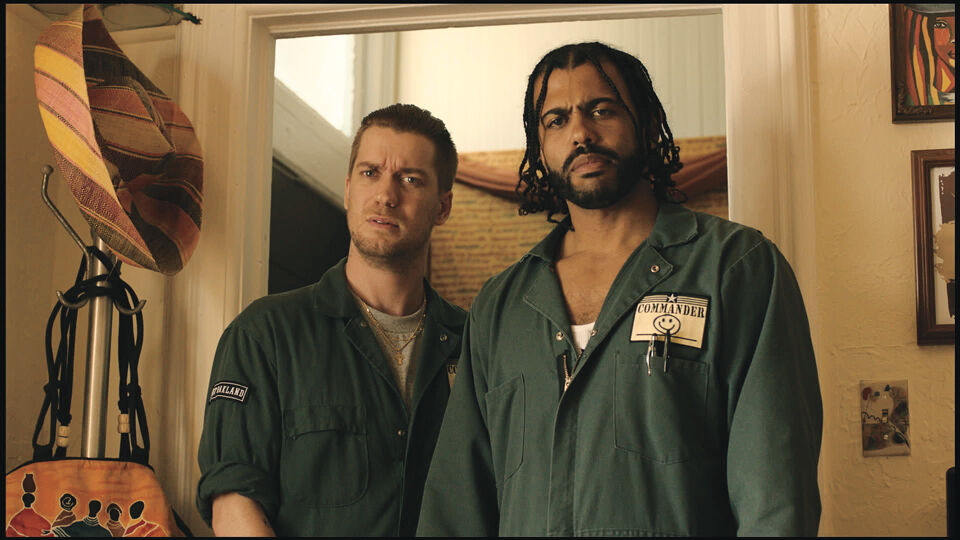 Along with his childhood friend Rafael Casal (left), Diggs wrote, produced, and starred in the film Blindspotting.

It’s hard to think of a hotter star than Daveed Diggs.

The Oakland native, 38, has been on a remarkable creative streak following his 2015 breakthrough on Broadway in the blockbuster musical Hamilton. Since then, Diggs has found success on screens small and big, created and starred in a hit movie set in Oakland, and continued recording the  cutting-edge hip-hop music that he was working  on before Hamilton happened. Meanwhile, he is constantly making his hometown proud by giving  back and supporting the region’s cultural identity  in various ways.

In short, Daveed Diggs is a local hero. Here are eight reasons why.

1. HE WILL NEVER FORGET WHERE HE IS FROM.

Despite his rocket-ship ride to Broadway and Hollywood stardom, Diggs constantly returns to his East Bay home. He gave Oakland a shout-out in his 2016 Tony acceptance speech and often lends his celebrity to draw attention to worthy causes in the area.

A recent example was an event Diggs and frequent collaborator Rafael Casal organized in September to help Children’s Fairyland, the storybook-themed amusement park next to Lake Merritt, which has been closed during its 70th year due to the COVID-19 pandemic.

Diggs and Casal invited various East Bay celebrities, teachers, and artists to present a virtual Celebrity Storytime program, aiming to raise $300,000 for the park. They intend to create a digital library of Celebrity Storytime episodes that will serve as a resource for teachers and children for years to come.

“Fairyland is a place that’s so near and dear to the hearts of those of us who grew up here,” Diggs told CBS Bay Area. “I learned so many things from [Fairyland’s puppet shows]. Fairyland taught me about empathy. It’s a really magical place. We want to make sure it will be here forever.”

It’s hardly the first time Diggs has been there for the age group that Fairyland attracts—his hip-hop spin on the Sesame Street song “Rubber Duckie” has been viewed 5.7 million times on YouTube.

2. HE WILL BE FEATURED  IN FAMILY FILMS FROM PIXAR AND DISNEY.

Listen for Diggs in the new feature from Emeryville’s Pixar Animation Studios when Soul drops on Disney Plus on December 25. The eagerly anticipated film is Pixar’s first to feature a Black lead (voiced by Jamie Foxx) and is codirected by Lafayette’s  Pete Docter, the deeply imaginative mind behind Pixar’s Monsters, Inc.; Up; and Inside Out.

Next up for Diggs is a big part in Disney’s CGI and  live action version of The Little Mermaid. He’ll provide the voice of Sebastian, the musical crab who performs the showstopping number “Under the Sea.”

In interviews for the show, Diggs points out that Douglass was a wealthy Black man, living a fairly comfortable life in the North, whose efforts to abolish slavery differed from those of Brown, a white man who was determined to give up his life for the cause. Diggs says these perspectives are relevant to contemporary dilemmas.

“Was it worth it for you to go out and march after George Floyd was dead if you have an elderly parent at home who is susceptible to COVID? People are still making these  decisions all the time,” Diggs told Hip Hollywood before the series premiered. “It’s the totality of a society making all of these decisions that leads to great moments in history. [The series looks at] everybody doing their part, and being intentional about their part.”

Diggs’s Douglass is a perfect follow-up to his  breakthrough role in Hamilton, in which he played both Thomas Jefferson and the Marquis de Lafayette. “I love that I got to play them both because they function differently in the context of the play,” Diggs told Stephen Colbert. “Lafayette’s arc is actually really difficult for me to get through. … When we meet him he is barely competent in English, and we see him become a great general and he does this really fast rap piece. For [the confident and sophisticated] Jefferson, the first time  I appear, I’m blowing kisses to everyone. It’s rare that you get to play such different roles in the same show.”

Diggs once told Diablo that he could see Hamilton existing in Oakland. “I think there’s a lot of Oakland in Jefferson, actually,” Diggs said in a 2016 interview. “He reminds me of the people of my grandfather’s generation— real slick-talking, smooth, ‘never let them see you sweat’ kind of men. The definition of swagger. In fact, the presentation of cool is a very Bay Area thing. If you’re in a room with one person from Oakland, that person is always going to be the coolest one there.”

4. HIS 2018 FILM,  BLINDSPOTTING,  ROLLED OUT THE RED CARPET FOR OAKLAND.

Diggs teamed with Casal to write and star in Blindspotting, one of the most powerful movies about  Oakland ever made. The film follows two employees of a moving company as they drive trucks filled with furniture around their hometown, observing its gentrification.

“From the start, our story was always these two characters telling the story of  a changing Oakland,” Diggs told Diablo in  2018. Diggs and Casal shot the film quickly  on a shoestring budget, and it became a surprise hit and provoked discussions about gentrification, police brutality, gun culture, and other hot-button issues. Despite the intense content, Blindspotting is a sensory love letter to the East Bay, featuring gorgeous visuals and a soundtrack packed with Bay Area hip-hop artists.

Another recent success has Diggs playing a brilliant  detective in the TNT series Snowpiercer, a dystopian drama based on Bong Joon-ho’s (Parasite) film  of the same name from 2013. Diggs plays Andre Layton, the world’s last living homicide detective sheltering on a perpetually moving train that circles the globe after the world has become a frozen wasteland. The show pairs whodunit plots with smart commentary about class warfare and  social justice, and Diggs is terrific in his lead role.  Season two of Snowpiercer is scheduled to premiere  on January 25, 2021.

Diggs received the Tony Award for Best Featured Actor in a Musical for Hamilton, which was nominated for a record 16 Tonys, winning 11. Diggs also shared the Grammy Award for Best Musical Theater  Album, and the show received the Pulitzer Prize for  Drama. Diggs and members of the original cast performed for President Obama at the White House, and he appears in the filmed version of Hamilton, which is now streaming on Disney Plus.

Diggs showed off his comic chops in  the outrageous HBO comedy Tour de Pharmacy in 2017, a faux documentary about bike racing and steroids. The film stars Diggs’s fellow Berkeley High alum Andy Samberg and was written by Alamo native  Murray Miller. Diggs plays Slim Robinson, a rider  obsessed with becoming the “first Black something,”  to live up to the status of his legendary Uncle Jackie.

8. HIS MUSICAL CHOPS ARE INCREDIBLE.

After frequenting poetry slams and studying the works of the great East  Bay rapper E-40 as a teenager, Diggs  has had his own success as a hip-hop  original. After creating The Bay Boy Mixtape  with Casal in 2010 and his first solo album, Small Things to a Giant, in 2012, Diggs worked with Freestyle Love Supreme, an improvisational rap group founded  by Lin-Manuel Miranda, which led to his role in  Hamilton.

Diggs’s releases with his experimental hip-hop group, Clipping, have drawn raves from music critics, especially those who appreciate the horror films of John Carpenter, Jordan Peele, and George Romero.  Clipping’s recent album, Visions of Bodies Being  Burned, dropped in October and draws on themes from the horror genre to present wildly imaginative lyrics  and stories.