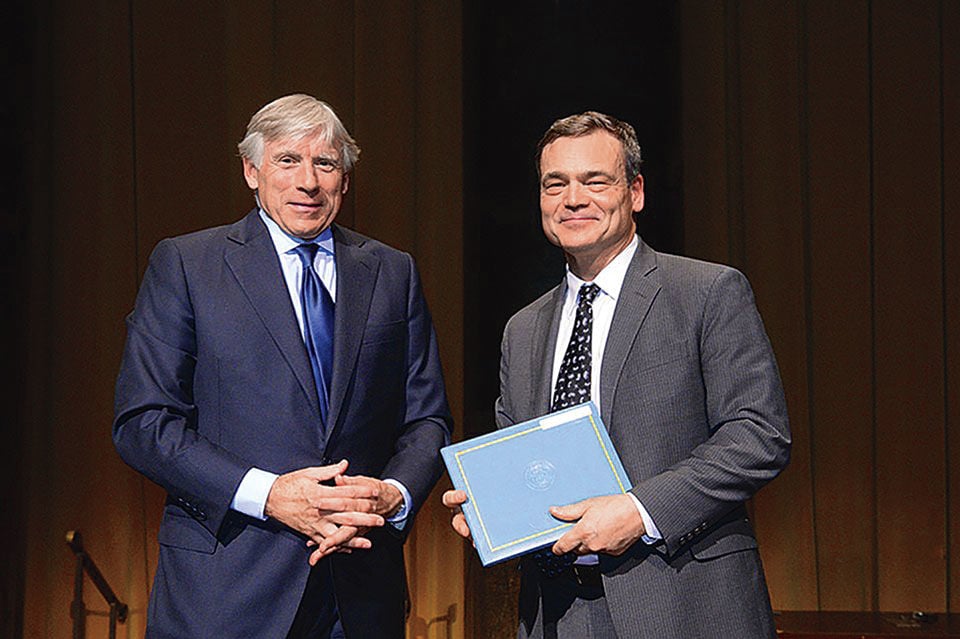 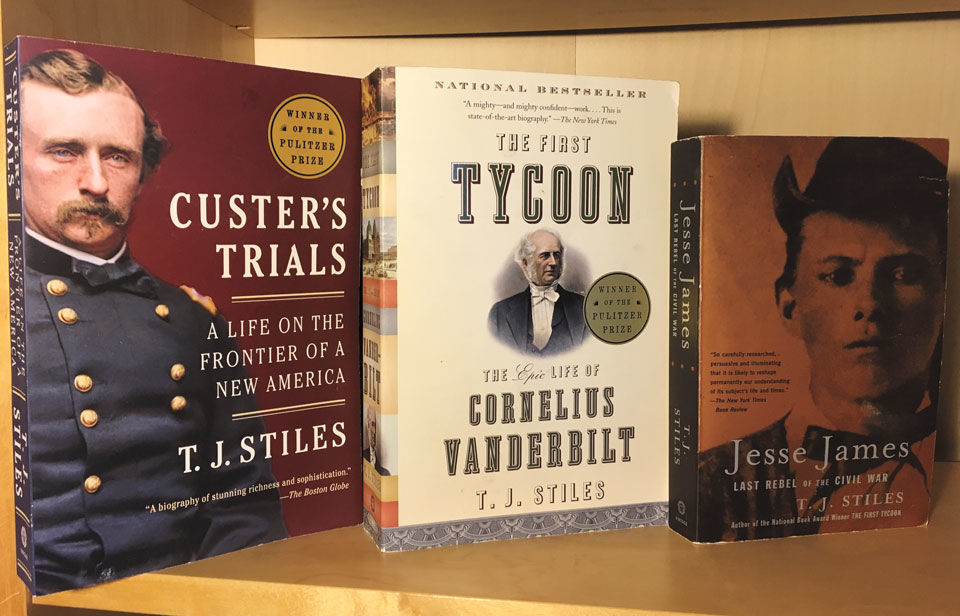 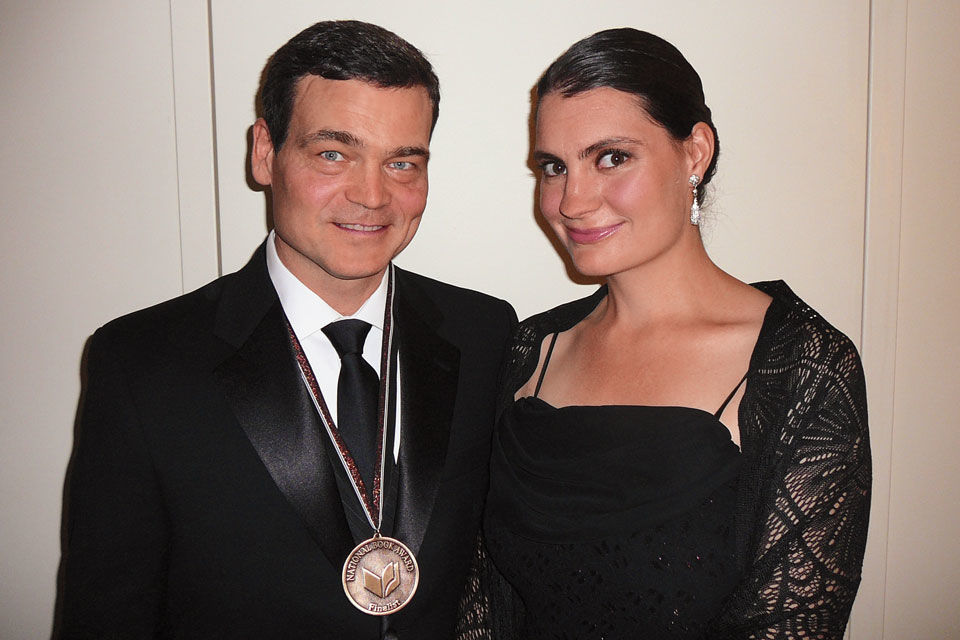 Stiles with his wife, Jessica, at the 2009 National Book Awards ceremony.

Author and historian T.J. Stiles has received critical recognition that most writers can only dream of. His 2009 book, The First Tycoon: The Epic Life of Cornelius Vanderbilt, won a National Book Award and the Pulitzer Prize  for Biography. He followed that up with Custer’s Trials: A Life on the  Frontier of a New America, which received the 2016 Pulitzer Prize for  History. We caught up with the Berkeley resident to discuss his prolific career and ask how history can inform our current turbulent times.

What led you to be a historian?

My road has been one of those winding roads that kept going back in the same direction.

I loved history when I was a young student. I went to college and thought I would major  in English and political science, but I ended up being a history major. The writing I was  doing in my history classes was more satisfying, and it spoke to my interest in understanding the world.

Do you have a favorite part of the process when you are working on a new book?

I love every part of the process. When you spend several years writing a book, you kind of have to. I love going through the National Archives and finding letters and reports that were amassed under martial law [during the Civil War].

When I worked on my most recent book on [George Armstrong] Custer, I found an  amazing letter from an officer about the murder of a young girl who had been held in  slavery for months after the formal end of slavery. I think about her all the time; she would not be remembered if I had not come across this letter.

In addition to tireless research abilities and writing skills, what does a historian need to bring stories to life?

The central character in my biography  of Custer is a third person who was involved with him and his wife, Libbie Bacon Custer. Her name was Eliza Brown. She was enslaved in Virginia. She seized the opportunity of the Civil War to escape slavery and find freedom, and Custer hired her to run his house.

Eliza Brown had a fascinating relationship with Libbie; they were allies who were living across the color line and living in a place where the most power a woman had was in the household. … When I was writing, I was thinking about things  from Eliza Brown’s perspective the entire time. Her story hadn’t been explored, and it brought an exciting new perspective  to consider.

Have you picked the subject for your next project?

Yes, my next book is about Theodore Roosevelt. His big mission, for much of his career, was civil service reform.

This is so relatable to our current world. Politics in the United States during the 19th century was all about the spoils system—the party in power got everything they wanted. Everything was partisan. Everyone got tossed out almost every four years with the new administration, which was terribly unproductive.

So the process of instituting civil service reform was a profound change. One of the unanticipated benefits was that people were qualified to do the work. They were experts and nonpartisan about doing their jobs. Promoting the pursuit of power was not part of it; this was a profound change in the way government worked.

We are currently seeing the very  dramatic repercussions of [an] assault on our government institutions. The work of the Centers for Disease Control and Prevention, the National Institutes of Health, and the Federal Emergency Management Agency is just a portion of the countless ways the federal government helps us.

These agencies are run by professionals, people who are experts and are qualified to respond to emergencies. When these positions are filled by temporary acting appointments, and the nonpartisan civil servants have been fired or have left their jobs, the results are disastrous. That can be seen as a partisan statement, but I see it as  a statement of fact.

What comparisons to historical events do you see in our current situation?

The flu pandemic of a century ago seems comparable in many ways, but then again, the situation is always changing. The end of World War I brought terrible disruption internationally; Europe was in ruins and the world was much different than today.

In some ways you would have to go back to the early modern period or the Middle Ages with the various plagues that broke out. Smallpox is another raging pandemic that went on for centuries.

In our era of globalization, a pandemic takes on a different context. Globalization allowed the virus to spread—but also allowed the potential of a specific response, which unfortunately is not being realized. Instead of sharing knowledge and expertise, the current administration is looking for scapegoats and blaming others. We are seeing an attack on the experts who should be leading the response. It is absolutely stunning.

After World War II, the U.S. helped create the World Health Organization and the World Trade Organization; all of these international bodies were created to concentrate global expertise. [Now], the U.S. could be leading a global response that would pool the world’s resources.

You are quite prolific on Twitter. How will social media affect the historical record of these times?

I don’t envy future historians [who] will have to sift through a flood of material because of all the hot takes posted to social media. [Twitter is] the public watercooler. You stand there and give your opinions. But you have to be open to other ideas and be willing to change your mind when you receive new information.

Finally, what is it like to be recognized with something as significant as a  Pulitzer Prize?

To put it simply, it is seeing your dreams come true. I remember being a young  hack in publishing, thinking about how  incredible it would be to win one. It has been astounding to experience; the Pulitzer brings incredible recognition to your work.

With that in mind, I am painfully aware of the fact that someone else could have received those awards. So, I do feel  recognized, but I also feel lucky.

I’ve learned that success and recognition should lead to more humility. When I write a book, if I don’t give the reader a reason to read the next page, both intellectually and for their reading pleasure, I’m not doing my job.