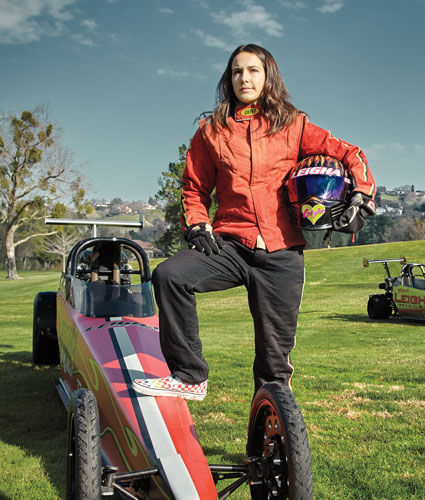 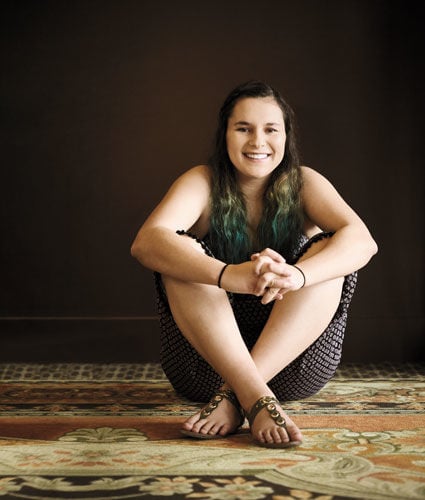 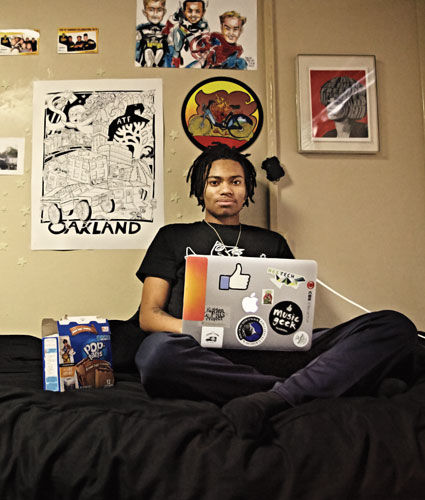 It’s easy to despair about the future of the world. Are the Snapchat-​addled kids of today really up to the task of getting us out of this mess? Who among the legion of meme-​making, Juul-vaping, floss-dancing teens roaming the halls of America’s high schools will emerge to inspire and show us the way forward?

Take heart. They are out there, the exemplars, if you search hard enough. We looked, and we found. Some of today’s young men and women are doing things that might make us older folks cringe at the thought of our own misspent youth. They’re hustling and striving and thinking big. They’re kind and confident and smart, and they’re hard-working in a way that blows those Gen Z stereotypes of molly-coddled youth to smithereens. Maybe most important of all, they’re earnest.

So here, in these uncertain and anxiety-inducing times, we offer a glimpse of hope: A vision of tomorrow’s best and brightest, who even today are accomplishing feats that we can all take heart in.

Leigha Miller is typically nonchalant as she describes her most dramatic drag-car race. She was 10 years old and had just moved into a new age bracket—incredibly, from the 6-to-9-year-old division—and was behind the wheel of a larger, more powerful rig. That wasn’t a problem, she says. It was the shocks.

"One was tighter than the other, so it felt like the car was pulling toward that side," she recalls. She tried to straighten out, overcorrected, and sent the car barreling over itself. By the time she crossed the finish line, she was sliding down the one-eighth-mile track on the side of the car.

What might give another 10-year-old the fright of a lifetime—to say nothing of her parents—was to Miller just another day at the track, albeit a bummer of one. "Ruined car," she laments. "I couldn’t race any more that day."

Miller, it would seem, doesn’t scare easily. It’s a trait that’s served the 16-year-old from Alamo well as she’s risen up the ranks to become one of the country’s top young drag-car racers. She has won Junior NHRA championships in multiple age groups, including last fall in the bigger-engine junior comp division in Las Vegas, despite not yet having a driver’s license. (Not a problem on the junior circuit.)

The sport doesn’t separate by gender, so Miller competes against both girls and boys. She also owns several age records at her nearest track in Sacramento, including, she says with a touch of pride, the slowest eighth-of-a-mile race there: 63 seconds. That was her first try. Her second time down the track, she halved that time, and halved it again the third time.

It’s not all white knuckles and mashing the gas. Unlike NASCAR or Formula 1 racing, dragsters are about precision, not brute force. Miller and her competitors predict their times before the race, then attempt to come as close as possible to matching that time, instead of blowing each other off the track. Variables like elevation, humidity, wind, and the condition of the track can affect how the dragsters run, so becoming a champion requires as much engineering know-how as adrenaline.

Miller’s father, Dean, introduced his youngest daughter to the sport despite having no history with it himself, and has accompanied her around the country for races. He helps dial in the engine, but always according to his daughter’s instructions. "She’s in charge, completely," he says.

To qualify for the western and national championships, racers compete in meets all around the west, from Los Angeles to Utah. It all makes for a sometimes-hectic schedule for the Monte Vista sophomore and straight-A student, who serves as president of her class, point guard on the girls basketball team, and—hopefully, she says—part-time worker at a local frozen yogurt shop (in addition to star racer).

Following the 2018 championship, Miller has decided to step back a bit from the circuit. "I love it," Miller says of racing. "I’ve made so many amazing friends who I consider family. But it just doesn’t fit in with a normal everyday schedule." She is focusing on school and eventually a career away from the track. Athletic trainer for the Warriors would be a dream job, she says, or maybe motivational speaker. But that’s further down the road. First up is getting comfortable motoring around the streets of Alamo with her brand-new driver’s license.

Sarah Whalen watches movies differently than most teenagers do. Where others get sucked into the plot, she has a preternatural ability to see shots as intentionally composed—lighting, framing, and more all coming together in a deliberate way. Sometimes she’ll watch the same film over and over to better understand the editing.

Take You’ve Got Mail, for instance. "There’s a scene where Tom Hanks is drinking a martini or something, and every time it cuts back to him, the glass gets [more full], not less," she says. "And then, suddenly in one shot, there’s an olive in it where there hadn’t been. That bothers me."

To the young filmmaker, the small stuff matters. That admirable attention to detail is evident in her debut short film, The Risen, which was screened in the American pavilion at the 2018 Cannes Film Festival.

The eight-minute film revolves around a group of kids surviving in the woods following an apocalyptic catastrophe. "At the time, I was 16 and taking the SATs and faced with a lot of things, like, Whoa, I’m not a kid," Whalen says. "I wanted to amplify that with some of the sci-fi scenes I knew from my childhood movies"—such as E.T. and Back to the Future—"but wrap it into my own point of view."

Whalen pitched the idea to Shawn Ryan, cofounder of the Young Actors’ Theatre Camp (YATC) in the Santa Cruz Mountains, where she’d taken acting classes. Ryan was impressed and invited Whalen to film it that winter with students from the camp. YATC’s other cofounder, John Ainsworth, worked behind the camera, freeing Whalen to block out scenes and implement her vision. "I got to see how many takes we had to do," she says, "and to see the actors get to the point where it clicks in their head: This is what I want from the scene; this is how I’m going to react. That was the most rewarding part."

After editing, color correction, and sound work were complete, Ryan decided to submit the film to several festivals, and to Whalen’s utter surprise, Cannes accepted it as part of the emerging-filmmaker category. Whalen, along with Ryan, Ainsworth, and several cast members, flew to France and rubbed shoulders with the stars.

As if being among the glitterati wasn’t enough, Whalen’s fish-out-of-water Cannes experience owed as much to her age—far younger at 17 than most of the college and grad-student entrants in her category—and gender as anything else. "I definitely realized from being at Cannes how male-dominated the industry is," she says. "It really hit me that most of the films being made are made by men. It was an eye-opener."

Back home, the film has continued to make the festival rounds, screening at the Monarch International Film Festival in Pacific Grove and the Horror Buzz Screaming Room Film Festival in Long Beach. She has considered turning it into a full-length feature, but first things first. She intends to continue studying film in college, which (pending acceptances to her applications) she’ll be attending this fall.

And while Whalen’s excited to learn more about script writing and storyboarding, it’s already clear that the director’s chair is where she belongs. "I’m going to pursue it with my whole self," she says. "Directing is what I want to fill my life with."

By the time George Hofstetter found himself speaking at Colin Kaepernick’s "Know Your Rights" conference in Miami in 2018, he was a fairly well-practiced public speaker. After building a prototype phone app in 2015 called CopStop—meant to help de-escalate anxiety during traffic stops—he became in-demand at tech conferences.

This is not surprising, since Hofstetter’s story is irresistible: The teenager from East Oakland committed himself to learning coding via YouTube and built an app intended for social good.

In his presentation, as Hofstetter explained how the 2012 shooting of Trayvon Martin inspired his work, he noticed a woman a few rows back, clearly overcome.

The woman, it turned out, was Martin’s mother, Sybrina Fulton. The two were introduced, and "she gave me the biggest hug," Hofstetter says. He’d already met with scores of leaders about his work—including Oakland mayor Libby Schaaf and former White House Chief Technology Officer Megan Smith—but this, he says, was different. "She told me how proud she was of me, and to keep sharing my story. When she hugged me, it was as if Trayvon was hugging me."

For Hofstetter, it was as sure a sign of validation as watching the number of downloads rack up for his self-built app.

Tech and social justice have always gone hand in hand for Hofstetter. Despite growing up in such proximity to the home of the microchip, "Silicon Valley seems miles away," he says. His introduction to coding came through a diversity-focused event held by the think tank Qeyno Labs. Hofstetter and his friends were guided in building a social network for black students who attend predominantly white private schools—whom he knew from experience dealt daily with feelings of isolation.

Hofstetter was almost instantly hooked, and—relying solely on a few websites, YouTube tutorials, and other hackathon events—learned various computer languages. "It started off being fun," he says, "but then it opened my mind: You have this platform, why not use it to solve societal issues?"

Thus CopStop was born. The program, which launched in the App Store in January 2018, allows users who have been stopped by police to send a signal to a preselected emergency contact informing them of their location and the fact they’ve been stopped. "It’s to alleviate anxiety for people of color when they’re in a situation of isolation and not allowed to contact anyone, which can be really intimidating," Hofstetter explains.

One might have expected a dubious reaction from local officials, but Hofstetter says response has been positive. He was even able to present his program to police in San Leandro. "I was pretty scared [going into the station]," he says. "One, I’m black, and two, it’s called CopStop. But when I explained the app was trying to bridge the gap of miscommunication between the community and officers, their eyes lit up."

In the meantime, Hofstetter graduated from Alameda Community Learning Center charter high school and is now studying business at Menlo, where he’s founder and president of the Social Justice Club, and taking computer science classes at Stanford.

Not that he’s eager to transform into the Silicon Valley archetype. After shadowing a Google programmer for a day in 2015, he decided he’d rather make it on his own. "I do love to code, but my passion is changing lives," he says. "For me, it’s about: What’s the point? What’s the impact? I want my life to have a legacy—to create change that’s generational. And tech is the best way for me to do that."