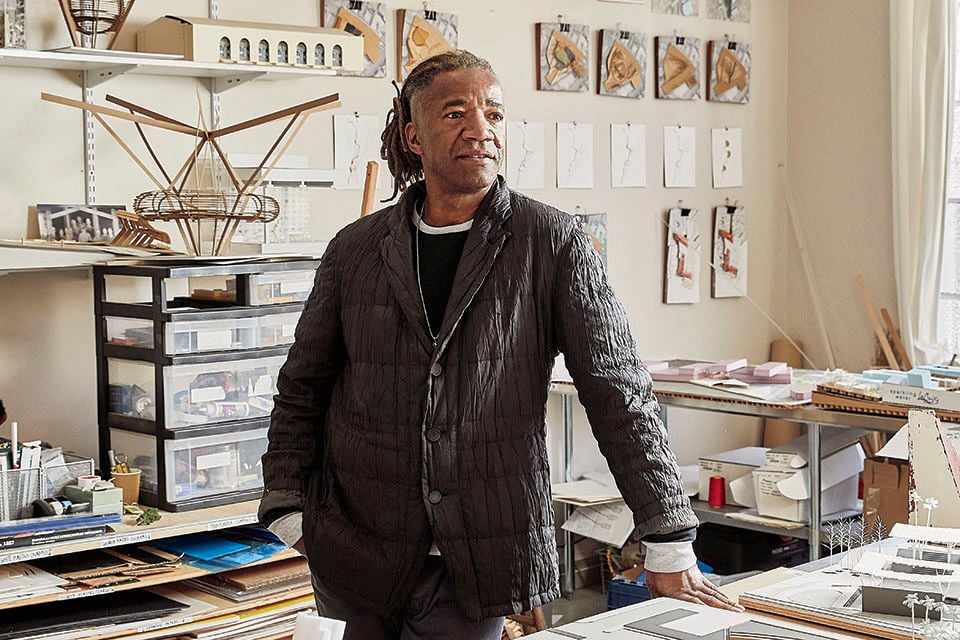 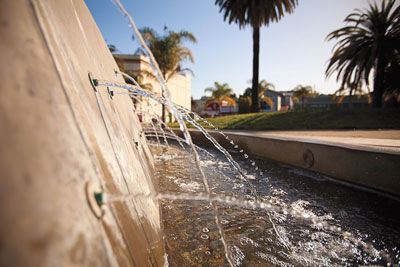 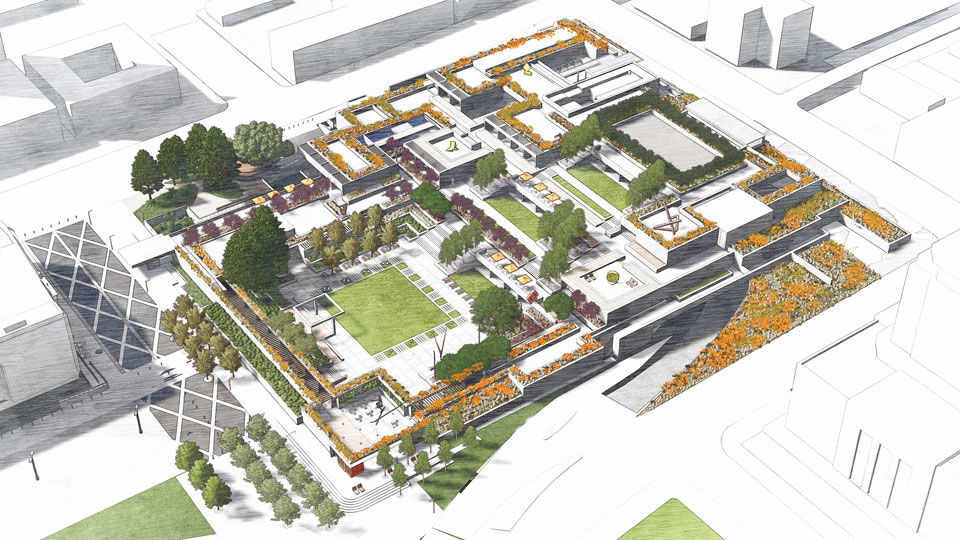 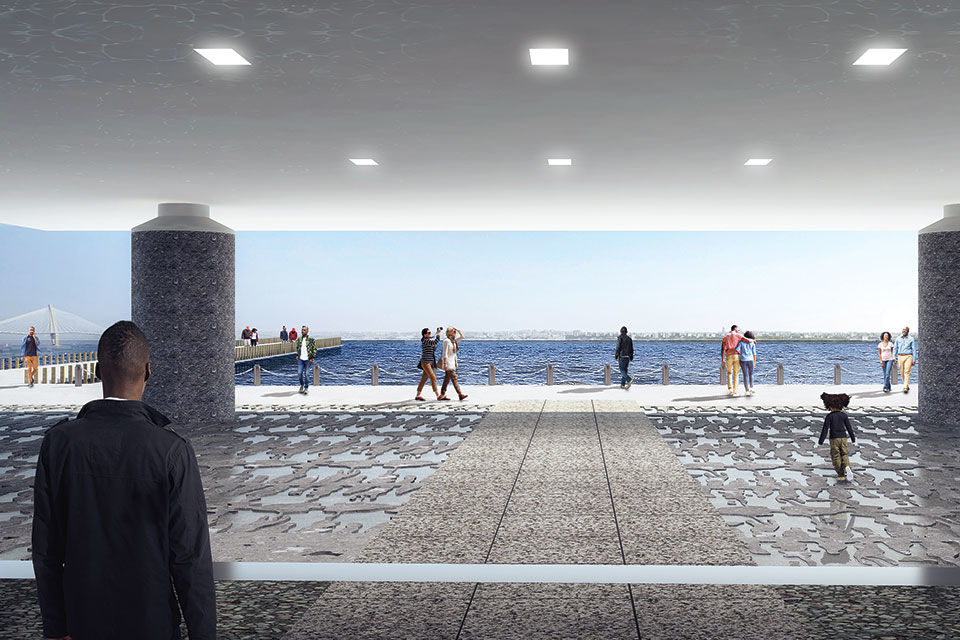 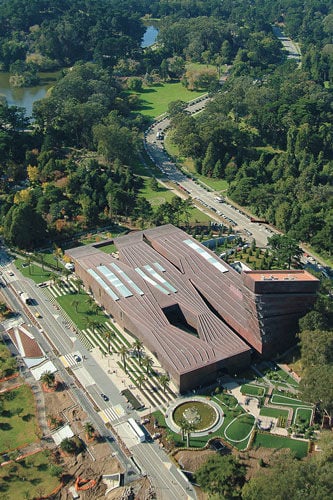 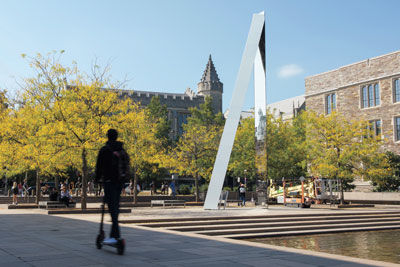 It’s not easy to define what Walter Hood does—and that’s just the way he likes it. For starters, the longtime Oakland resident is a landscape architect, designer, artist, historian, and educator. Hood, 62, was also named a 2019 MacArthur Fellow (an award familiarly known as a Genius Grant) so the word genius can be added to the already long list. But, not surprisingly, Hood offers the best summary of his chosen profession. "I think of myself as a cultural interloper," he says with a laugh.

"Cultural interloper" is a fitting term for an artist whose extraordinary body of work defies easy pigeonholes. In some ways, Hood credits his boundary-breaking efforts to living on the West Coast, which has afforded him "the freedom to incubate." Born in North Carolina, Hood spent part of his early career on the East Coast, where "people want you to stay in your lane," he says. "Here in California, you can think without being judged."

This freedom is something Hood has maximized in his adopted state, where a significant number of his built projects can be found.

A walk around Oakland, for example, where he established Hood Design Studio in 1992, reveals the astonishing impact he’s had here. In 2003, he took an underutilized turn lane at the tip of Lake Merritt, added landscaping and water features, and created Splash Pad Park, a welcoming site that now hosts the biggest weekly farmers market in Oakland. Similarly, there’s Lafayette Square Park, a 1999 project in which Hood helped transform an inner-city site into a multipurpose community treasure—while still preserving traces of the park’s history. Elsewhere in the Bay Area, he has made an equally impressive mark, from overseeing the de Young museum’s landscape design in Golden Gate Park to collaborating on an interactive sculpture in San Francisco’s Hunters Point called Frame/Refrain.

This year, Hood is spearheading the renovation of the campus at the Oakland Museum of California (OMCA), which is set to be completed by the end of the year. Hood had long thought there should be a way to enter OMCA from Lake Merritt—which sits right outside the museum but was inaccessible from the fortresslike building. "I wanted to get people to think of themselves differently in the city," Hood says. "And if you can see yourself differently in a city, you can change your sociology."

Hood proposed removing a section of the building’s east corner so that visitors who might be strolling around the lake could enter the museum’s gardens, which he is refreshing with new landscaping.

"Walter came up with this matrix of the museum in the larger environment," says OMCA’s director and CEO, Lori Fogarty. "He was looking at the whole ecology of the city and how the community uses different spaces here. He approaches each project in terms of its memory, history, and place, which is why he’s so much more than a landscape architect. And the Genius Grant really underscores this."

The decision to give the museum an additional point of entry involved an in-depth study of the surrounding area and its existing common spaces; the goal, Hood says, was to make OMCA’s gardens part of the greater ecosystem. He also examined the building’s provenance—it’s a 1969 concrete, brutalist landmark designed by renowned architect Kevin Roche—to assess what it would mean to take out a section of the iconic structure.

"We looked at the museum’s history, cultural history, and mythology," Hood says, "and saw that it was not always meant to be closed. It’s all about ‘breaking the box,’ and the way we’re opening it up respects what Roche did."

If there is a single thread that connects all of Hood’s various projects, it is a respect for what a place’s history can tell us. Many of these narratives reflect issues of race and social justice, themes that are evident in projects he has created across the country. For instance, Nauck Town Square is a space he designed in 2016 for the city of Arlington, Virginia, which was home to Freedman’s Village, a site established for freed slaves during the Civil War. To honor this history, Hood made a sculpture for the park called Freed, built from interconnected "slave badges." As is often the case with his work, Hood combined landscaping, sculpture, and storytelling in Nauck Town Square.

Another project that offers a provocative lens on the history of race relations is the landscape design for the forthcoming International African American Museum in Charleston, South Carolina. The museum is being built on the site of Gadsden’s Wharf, where some 40 percent of all American slaves disembarked from the ships that brought them from Africa. This chapter in United States history—and the impact that’s still felt today—informed Hood’s creative approach. "The landscape strategy takes cues from the tradition of ‘hush harbors,’" Hood wrote, "landscapes where enslaved Africans would gather, often in secret, outside the view of slave owners, to freely assemble, share stories, and keep traditions from their homeland alive."

Hood’s interest in these subjects is cultural as well as personal. He was raised in Charlotte, North Carolina, where for young African Americans, "the fear of going to prison or being shot was real," he says. Interested in design, he attended North Carolina Agricultural and Technical State University, and then went to UC Berkeley for master’s degrees in architecture and landscape architecture. One of his mentors at Cal was famed landscape architect Garrett Eckbo, who "opened my eyes to cultural geography and the importance of blending social sciences with landscape design," Hood says.

After graduating in 1989, he set up his own practice, choosing Oakland because, Hood explains, "its diversity and history were attractive to me." But he remembers the early years of his studio as challenging; he says he designed "fictions because I had no real work." That would soon change, and as more and more work came his way, he amassed a portfolio of projects for world-class clients, including the Broad museum in Los Angeles and the Cooper Hewitt in New York. At the same time, he maintained a focus on the small-scale, big-impact projects that could be achieved on a hyperlocal level. Throughout, he has been committed to mentoring the next generation and, since the early ’90s, has been a prominent member of the faculty of his alma mater UC Berkeley, where he’s a professor of landscape architecture, environmental planning, and urban design.

Today, it would be easy for someone like Hood to kick back and rest on his laurels. Yet despite all his achievements, accolades, and awards of the highest order, he is clearly not finished being a "cultural interloper."

Nor is he finished with stirring up controversy. For instance, among his recent projects is a hotly debated sculpture at Princeton University exploring Woodrow Wilson’s racist legacy. Hood is also putting together a major exhibition that will examine redline maps, which depict discriminatory housing policies. "What interests me," he says, "is why we make devalued landscapes. The biggest issue is that we don’t know how to deal with race, and it plays itself out in different ways.

"Some of my projects have been controversial because they dig into history and culture, but they get a reaction. And when people react," he adds, "it means they care."