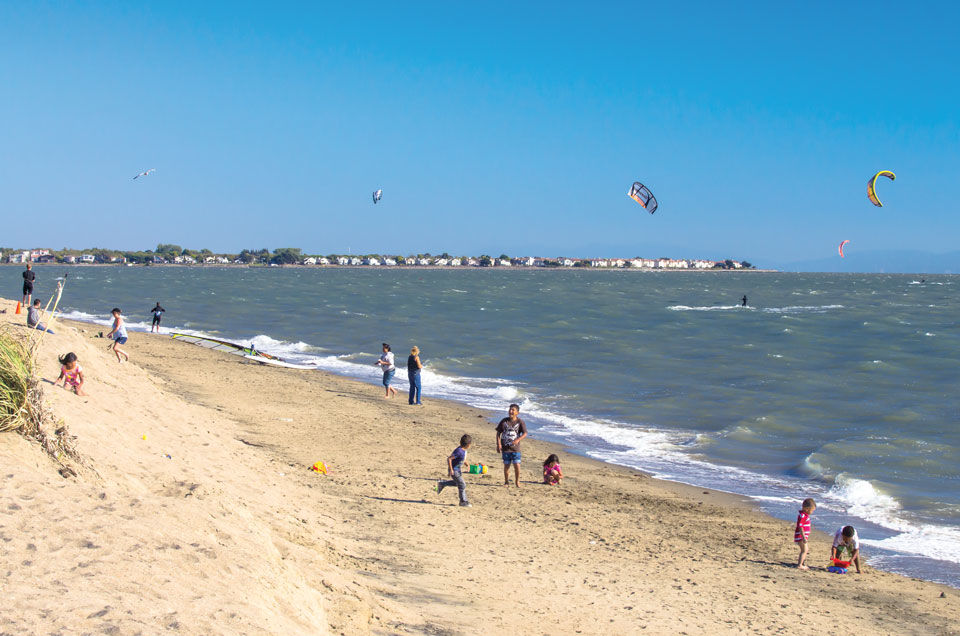 Build sandcastles, play in the water, or try kiteboarding at Crown Beach. 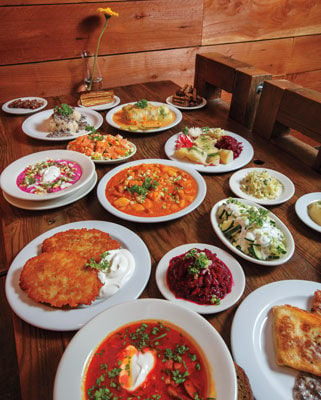 Potato pancakes and goulash are among the specialties at Mama Papa Lithuania Restaurant. Photo by Tomas Demenis. 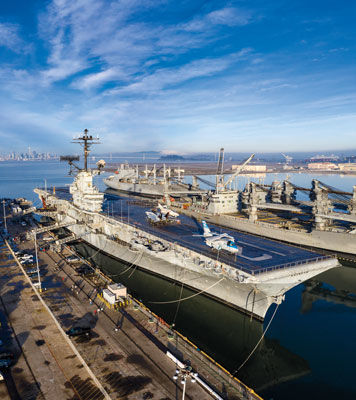 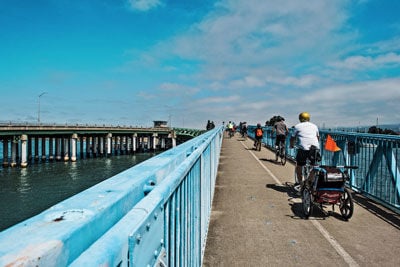 With summer almost upon us, it’s time to start planning seaside outings. But you don’t have to head to Marin, the Peninsula, or Santa Cruz for an escape to the beach. The East Bay’s own Alameda features sandy shores and outdoor activities galore.

There is no better reminder that Alameda is a beach town than the annual Sand Castle and Sculpture Contest. Held this year on June 8, the event sees families, scout troops, and other teams descend on Crown Memorial State Beach with shovels, pails, and rakes to create castles and art pieces ranging from basic inverted bucket structures to elaborate edifices with turrets and arches. "Participants come from all over the Bay Area," says Patrick Russi, recreation manager for Alameda’s Recreation and Park Department. "I always say it is the unofficial start to summer fun each year."

So cross a bridge or tunnel, or hop on the ferry from Jack London Square, and enjoy the island adventures that await just a short drive away from home. alamedaca.gov.

Crown Beach is the perfect place to start exploring the Island City. Stretching 2.5 miles, with San Francisco skyline views and warm, shallow waters, the strand is a mecca for swimmers, waders, and sunbathers all summer long. If you want to get out on the water, stop into Boardsports California’s beachfront outpost and rent a stand-up paddleboard or kayak, or sign up for a windsurfing or kiteboarding lesson, in which board riders are propelled by wind power via a sail or strong kite.

"Alameda is the best beginner kiteboarding and windsurfing spot on the Bay, because it has mild winds, shallow water, and wind directions that blow you back to the shore," explains Rebecca Geffert, Boardsports’s co-owner. The sandy expanse of Crown Beach is also ideal for novices because it provides a broad landing target. "At all other Bay locations," Geffert notes, "you have to be able to make it back to the same spot you started from."

Families should stop by the free Crab Cove Visitor Center and Aquarium, where kids can peer into microscopes and learn about Bay life, while parents take in displays about the area’s past incarnation as Neptune Beach, which has been called "the Coney Island of the West." In the 1920s and ’30s, the amusement park attracted sun worshipers from all over

Northern California, who rode the Whoopee roller coaster and swam in saltwater pools with fountains and diving towers.

Nowadays, Alameda’s shoreline has been largely returned to its natural state, making it a hot spot for bird watchers. The Elsie Roemer Bird Sanctuary on the island’s southeast coast gives the chance to see black-bellied plovers, long-billed curlews, and other species up close. At the other end of the island, a colony of endangered least terns makes its home on an abandoned naval airstrip. Join the East Bay Regional Park District on June 15 for its annual bus trip to view the nesting terns and their chicks; or, you can watch the little birds hunt from Crab Cove and other parts of the shoreline. To protect the avian life, Alameda’s beaches prohibit dogs; if you bring Fido, keep her on the grassy parklands or walking paths. boardsportscalifornia.com, ebparks.org.

Fresh Bay air begets healthy appetites, which Alameda’s two business districts stand ready to satisfy. On the island’s east end, Park Street presents so many dining options that choosing is the hardest part. Some of the least assuming spots offer the tastiest meals, including the tiny Scolari’s Good Eats, which was recently featured on the Food Network’s Diners, Drive-Ins and Dives. (Its blueberry, bacon, and blue cheese burger is to die for.) Scolari’s will deliver to the next-door bar Lucky 13, which has a cozy patio; if you have kids in tow, grab one of Scolari’s little tables instead. Park Street also boasts what may be the only Lithuanian eatery in the West: Mama Papa Lithuania Restaurant and Tea House, where rustic tables and wood-​paneled walls transport diners to the Baltics to indulge in stuffed cabbage rolls and mushroom borscht with rye bread.

On Webster Street, the commercial strip on the island’s west side, dim sum is what draws families from across the Bay Area—notably to East Ocean Seafood Restaurant, which has dished out shumai, pork buns, and other Cantonese goodies for more than 30 years. While you’re on Webster Street, don’t miss the Pacific Pinball Museum, where kids and grown-ups alike delight in playing machines spanning the 1940s through today. scolarisgoodeats​.com, lucky13alameda.com, mamapapa​lithuania​.com, eastoceanseafoodrestaurant​.com, pacificpinball.org.

Farther west lies the 2,800-acre expanse that was formerly the Alameda Naval Air Station. The future site of housing and retail developments, as well as parks, this area is currently a mishmash of hangars and other retired military buildings. It’s a fun place to explore by bike, foot, or car to see the remnants of the past—and to grab refreshments at the numerous wineries, breweries, and distilleries. Alameda Point, as the island’s west end is called, also hosts the monthly Alameda Point Antiques Faire (the largest antiques show in Northern California), and it’s where you’ll find the USS Hornet Sea, Air and Space Museum, a decommissioned aircraft carrier offering fascinating tours. There’s even culture in the relative wilderness of the ex–naval base: On June 1 and 2, Tomorrow Youth Repertory will perform Romeo and Juliet at the Alameda Point Collaborative’s urban farm at 2600 Barber’s Point Road.

The old base is just one of many places to pedal. Alameda’s bike paths and lanes cover not just the main island—the shoreline route along Crown Beach is the highlight—but also Bay Farm Island, the Oakland Airport–​adjacent peninsula that connects to Alameda proper via two bridges (one for cars and a separate one for cyclists and pedestrians).

"We have more bike lanes per mile than any other city in the Bay Area, and the 25 mph speed limit for cars makes our island even safer for bicycles," says Hannah Otto, outreach coordinator for Alameda Bicycle, the 50-year-old Park Street shop that leads free, family-friendly, bike outings on the first Sunday of every month between April and October. Rides finish up at Tucker’s Super Creamed Ice Cream, the Park Street institution whose salted caramel and macapuno ​(young coconut) flavors are legendary. After all, there’s no better way to cap off a day in a beach town than by savoring a sweet, icy treat. alamedapointantiquesfaire.com, uss-hornet​.org, tomorrowyouthrep.org, ​alamedabicycle.com, tuckersicecream.com.