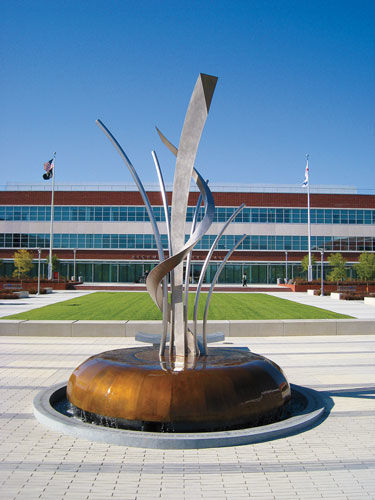 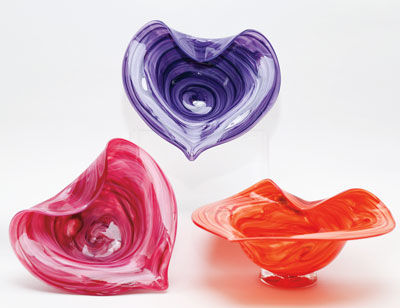 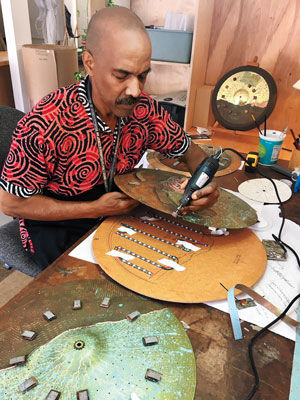 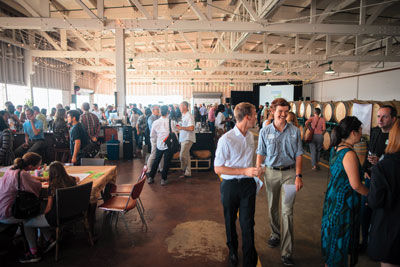 The urban winery Riggers Loft is an ideal spot for private parties and events. Photo by Brooke Anderson.

When, in 2018, major arts events—including Wine and Bowties’ hip-hop and culture festival, Feels, and West Edge Opera’s summer performance series—decamped to Richmond’s Craneway Pavilion following years in Oakland, it signaled a greater trend. Tired of sky-high venue- and studio-rental costs, many artists are staking a claim in the more affordable west Contra Costa city, and forging a burgeoning creative community in the process.

It’s not hard to understand why. While Richmond’s reputation was notoriously seedy a decade or so ago, city officials and community groups have made strides in cleaning up some of the more dilapidated areas, restoring historic buildings, and creating green spaces. The city is also home to the East Bay’s largest visual-arts organization, the Richmond Art Center (RAC), which offers 60-plus adult and children’s classes each quarter, and hosts exhibitions in its four galleries.

These days, you’ll find dozens of artists hidden away in those nondescript warehouses. They’re at the forefront of a growing movement that is positioning Richmond as an ideal destination for anyone interested in exploring creativity in the East Bay. richmondartcenter.org, sanfranciscobay​ferry.com/richmond.

One of the area’s most established artists, sculptor Archie Held works out of a sprawling complex of warehouses that he started acquiring in 1985, thanks to his friendships with building owners on the block. "I used to not invite artist friends over here because this is so obscenely big," Held laughs. "People come here and their jaws drop."

With the help of his crew, Held creates curving or twisting hand-textured metal forms, sometimes with a water element, for clients including George Lucas, Bill and Melinda Gates, Michael and Susan Dell, several Napa wineries, and countless cities and corporations. (He also designs and constructs the Pac-12 football championship trophy every year.)

Despite his vast experience making large-scale outdoor sculptures, Held says he also enjoys smaller commissions, such as ornamental pieces that serve as a focal point for a family home. "A lot of people think they could never afford a sculpture, but it’s more affordable than people think," he says. "I try to do something that’s more personal than putting a shape in their house. … It will have a lot of meaning for them." To learn more about Held’s work, or to inquire about scheduling a studio visit, go to archieheld.com.

On the opposite end of the spectrum is Slow Burn Glass, a glass-blowing studio that moved to Richmond from West Oakland in July. "[In Oakland,] I was in a 2,300-square-foot warehouse, where this is a 5,000-square-foot warehouse," says owner Bryan Goldenberg, who founded his business 16 years ago. "It’s just a better neighborhood, which is great."

Located in a factory building housing other industrial studios, Goldenberg’s space is toasty warm, even in the dead of winter, due to the burning furnaces he and his staff use to craft custom glass products, from lighting pieces, to drinking glasses, to decorative objects. Slow Burn also offers classes and events (Facebook, Uber, and Ghirardelli Chocolate have held functions here) for anyone interested in learning the age-old art form. Guests can create glass hearts for Valentine’s Day or spend date nights forging wine glasses, then sipping vino out of them in the studio.

Moving to Richmond has Goldenberg excited about future opportunities. "We’ve really upped our ante and are able to do more events, more classes, more products," he says. "[We are trying] to get this huge community going in Richmond. … You can see it starting to grow." slowburnglass.com.

No one, perhaps, has done more to bolster Richmond’s creative scene in recent years than Jeff Wright, the owner of Bridge Storage and ArtSpace. For the past decade, Wright has transformed his dad’s 66,000-square-foot storage facility into a coworking compound for artists and entrepreneurs. Strewn with hanging lights, thriving plant life, and colorful artworks, the result is a beautiful, friendly environment that belies the site’s utilitarian provenance. The glass-fronted work spaces range from private units to shared studios, including a woodshop, metal shop, sewing lab, and film studio. There’s also a gallery where artists can showcase their work, and a commercial kitchen coming soon. Patrons pay a low monthly fee to access all these amenities.

But providing an affordable place for creative types to hone their crafts is only part of Wright’s agenda. Bridge also hosts public events, including crafting workshops, film screenings, art exhibitions, fashion shows, poetry slams, neighborhood meetings, and parties. This month, the venue is joining forces with the RAC to host a satellite exhibition for RAC’s The Art of Living Black art show. Guests are invited to attend the Bridge’s opening reception on February 9—and to stop by anytime to tour the facilities, view the gallery, participate in events, or just grab a latte at the courtyard R&R Coffee kiosk.

"There’s a lot of pride in this community that is nascent," Wright notes. "People are realizing that Richmond is a special place." bridgestorage.com.

While visitors tend to flock to historic Point Richmond for meals (the eclectic Latin American restaurant Brezo, in particular, is a gem), many purveyors in other neighborhoods are bringing an artistic sensibility to the local epicurean scene. The communal dining experience Anaviv’s Table, for example, serves inspired, multicourse tasting menus to 10 diners three nights per week. (For more on Anaviv’s Table, click here.)

Then there’s Riggers Loft, a collective of two urban wineries and one cidery operating out of a magnificent, World War II–era ship factory at the tip of Point Potrero. "I really liked the idea of an artist’s colony," says Barbara Brown, who founded the unique tasting room, wine bar, and events venue with her husband, Kevin, in 2016. The Browns—who make vino under the label R&B Cellars—share their space with Carica Wines and Far West Cider Company; all three businesses produce and serve their wares inside the sprawling building.

In addition to sipping wine and cider, Riggers Loft patrons can enjoy live music on weekends, as well as regular trivia and open-mic nights and painting parties. (Pro tip: Come for sunset, when views of the Bay—with San Francisco in the distance—are especially spectacular.)

A rotating cast of caterers sells food in the back. One of them, John Hemping, the chef-owner behind The Eating, says Richmond is the perfect place for creative enterprises like his to grow and thrive. "A community of businesses is really becoming a thing here," he says. "It’s right where I want to be." east​brother​​beer​.com, riggersloftwine.com.