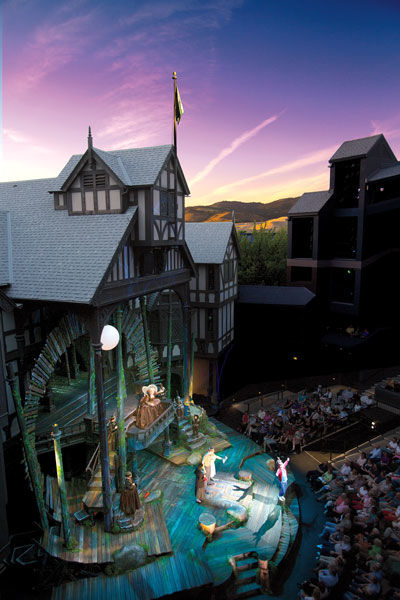 The open-air Allen Elizabethan Theatre is the centerpiece of the Oregon Shakespeare Festival. Photo by T. Charles Erickson. 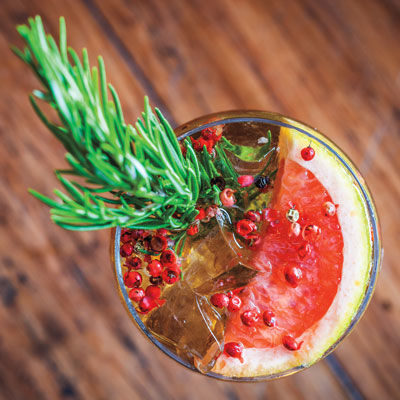 At Oberon's, pink peppercorn, grapefruit, and rosemary give gin and tonic a fanciful flair. Photo by Andy Card. 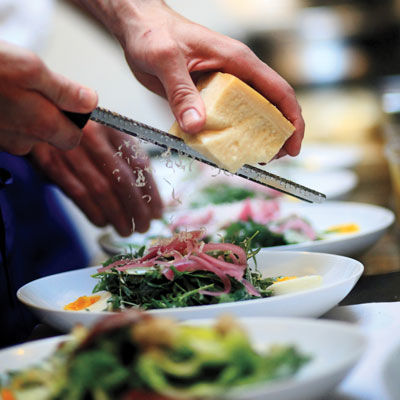 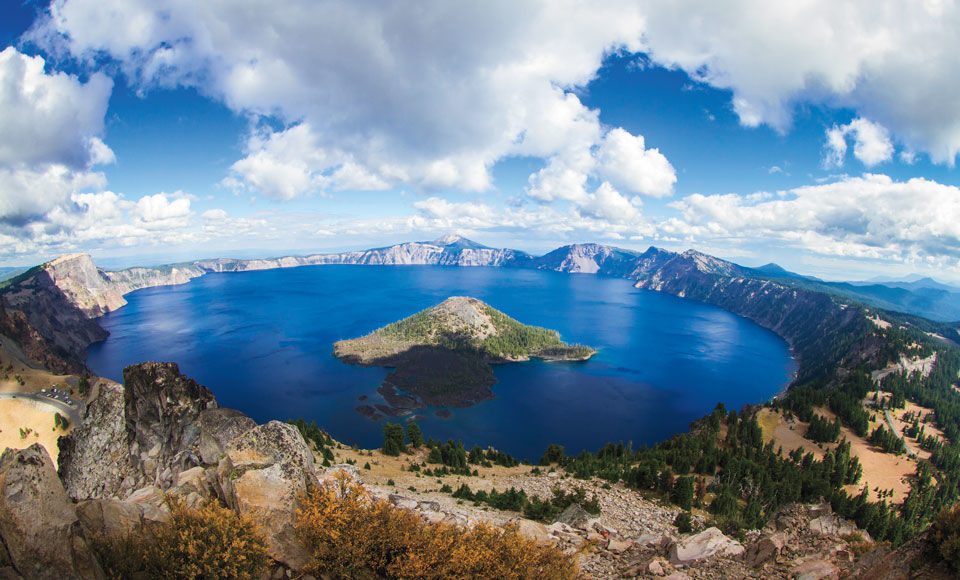 Every year, during the eight-month season of the world-famous Oregon Shakespeare Festival, some 125,000 visitors flock to the easy-going town of Ashland to soak up its theatrical magic.

It’s easy to see why this Bard-obsessed haven exerts such a magnetic pull on travelers. With its natural beauty, charming downtown, and eclectic population of theater lovers and bohemians, Ashland is a bit like the improbable love child of Stratford-upon-Avon and Boulder, Colorado.

Located just north of the California-Oregon border, Ashland is an easy weekend trip from the Bay Area. Many visitors choose to make the five-to-six-hour drive along Interstate 5, passing through the Shasta-Trinity National Forest (a scenic part of the state that, sadly, was ravaged by last fall’s wildfires). Alter­natively, there are direct 90-minute flights from San Francisco to Medford, Oregon, which is about 13 miles from Ashland.

For a smallish city with a population of just over 20,000, the caliber of Ashland’s resident festival is astonishing. Established in 1935, the Tony Award–winning Oregon Shakespeare Festival presents an annual portfolio of up to 11 plays, which typically includes at least three Shakespearean offerings, a crowd-pleasing musical, and a selection of modern dramas and world premieres. The productions are staged in rotating repertory in three theaters, with the main draw being the open-air Allen Elizabethan Theatre, a grand, timbered edifice complete with dramatic ​alcoves and romantic balconies—perfect settings for soliloquies, trysts, and ghost sightings.

The 2019 festival, which opens this month and runs through October, promises to be among the best ever. It’s the last one under the guidance of longtime artistic director Bill Rauch, who has assembled a stellar lineup of Shakespearean classics, contemporary plays, and more. "We always want the best theater audience in the world to have the most exciting, ​vital mix of plays possible," Rauch says. "And at the end of our eight-month selection process, we have arrived at an equal number of classics and new works that epitomize our mission to reveal our collective humanity."

The 11 plays that comprise the season certainly do just that, spanning a mix of genres, topics, and character studies. The calendar includes productions of Shakespeare’s As You Like It, Macbeth, and All’s Well That Ends Well, along with world premieres of Mother Road by playwright Octavio Solis and Between Two Knees, directed by the East Bay’s own Eric Ting, artistic director of the Orinda-based Cal Shakes.In addition, a wildly upbeat production of the hit Broadway musical Hairspray—based on

the beloved John Waters film—will be staged at the festival’s Angus Bowmer Theatre throughout the entire 2019 season. osfashland.org.

According to the festival folks, most visitors see an average of three plays during their stay in Ashland. But talk to anyone who’s spent time here, and they’ll tell you that theater is only part of the town’s appeal. There’s also an intriguing array of restaurants, shops, spas, and parks—and for those with enough time, irresistible options for day trips to lakes, mountains, and wineries.

The grande dame of local hotels is Ashland Springs, which features tasteful ​accommodations andfine dining at its on-site restaurant,

Larks, just steps away from the festival’s theaters. The hotel is also conveniently located near some of the town’sother top dining spots, such as Amuse, known for its elegant French-inspired fare, and Peerless Restaurant and Bar, a sophisticated eatery in the historic Railroad District.

Fittingly for a college town (Ashland is home to Southern Oregon University and its 5,000-strong student body), there’s no shortage of nightlife destinations from which to choose. Check out Oberon’s Restaurant and Bar, a Shakespearean-​themed joint that describes itself as "Ashland’s Most Ashlandiest Spot"; Liquid Assets, a popular wine and cocktail lounge; and Caldera Brewery and Restaurant, a cavernous brewpub on the outskirts of town. ashlandsprings​hotel​​.com, amuse​restaurant.com, peerless​restaurant​.com, oberonsashland.com, liquid​assetswinebar​.com, calderabrewing.com.

After a few hours sitting at the theater, stretch your legs in nearby Lithia Park, a 93-acre expanse of winding paths, duck ponds, and gorgeous landscaping. Or consider a restorative hot-water soak in the outdoor pool at the Chozu Bath and Tea Gardens, a serene oasis that offers spa treatments along with light Japanese fare.

Oenophiles will want to save at least a half-day (though a full day is optimal) for wine tasting. Ashland is a short distance from Rogue Valley and Applegate Valley, whose nearly 100 wineries have made southern Oregon an internationally acclaimed wine destination.

If you have time for a longer excursion, head to Crater Lake National Park, a must-do outing that’s less than a two-hour drive to the northeast. It’s well worth a visit at any time of year—for cross-country skiing in winter or boat trips across the shimmering blue lake in summer.

But even if you never leave Ashland itself, you’ll return to the East Bay enriched by the festival’s memorable theater experiences and charmed by the town itself. ashland.or.us/lithiapark, chozugardens.com, southern​oregonwines.org, nps.gov/crla.