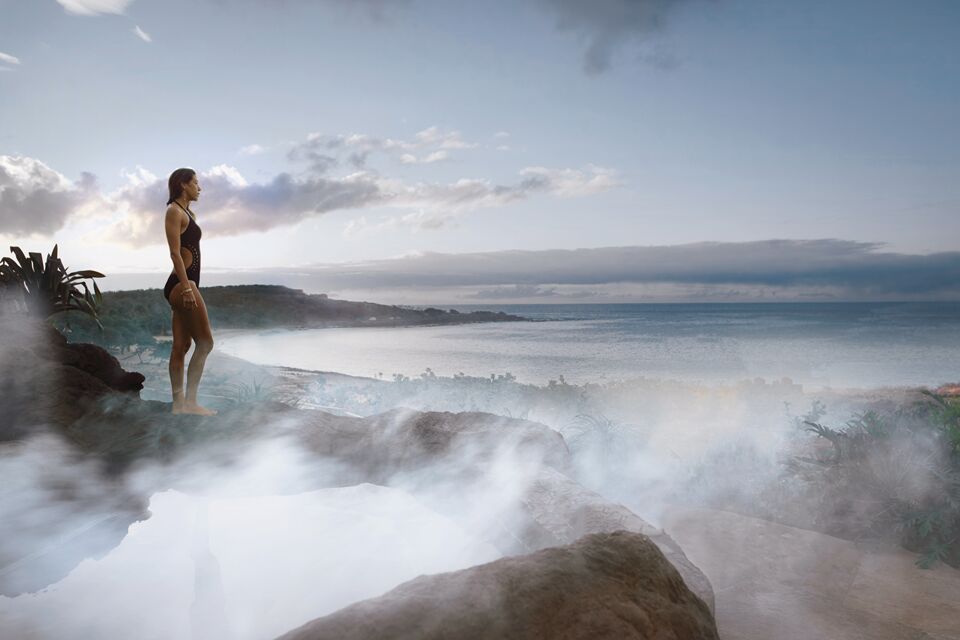 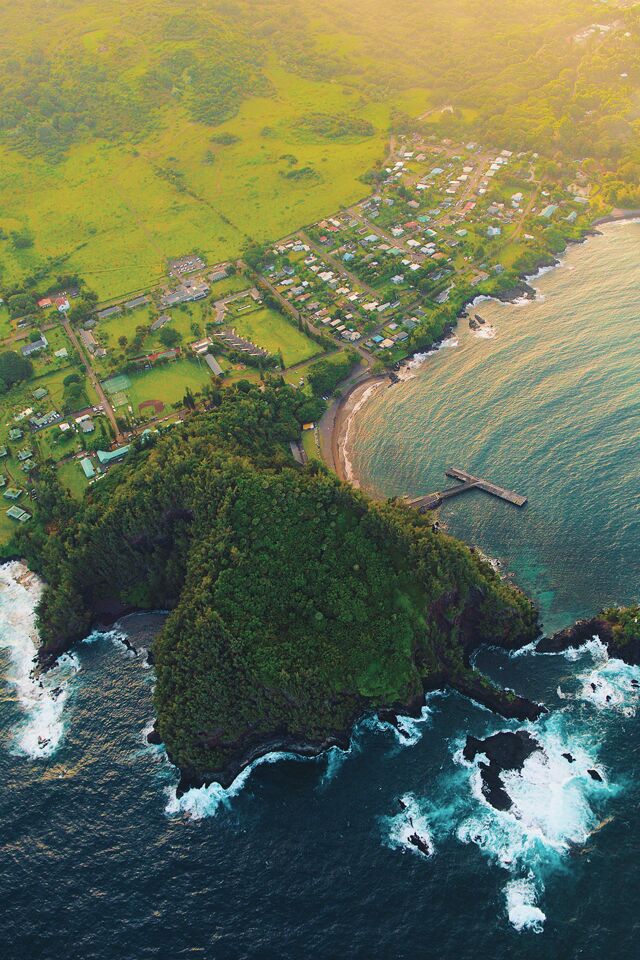 An aerial view of Hana, with the Hana-Maui Resort at left. 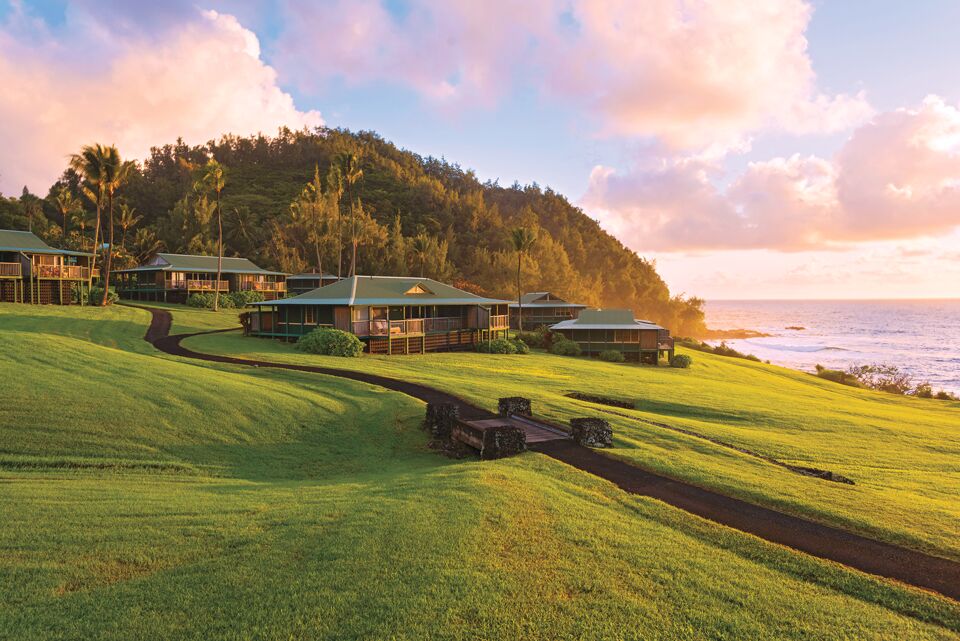 The lodgings at the Hana-Maui Resort offer sublime views of the Pacific. 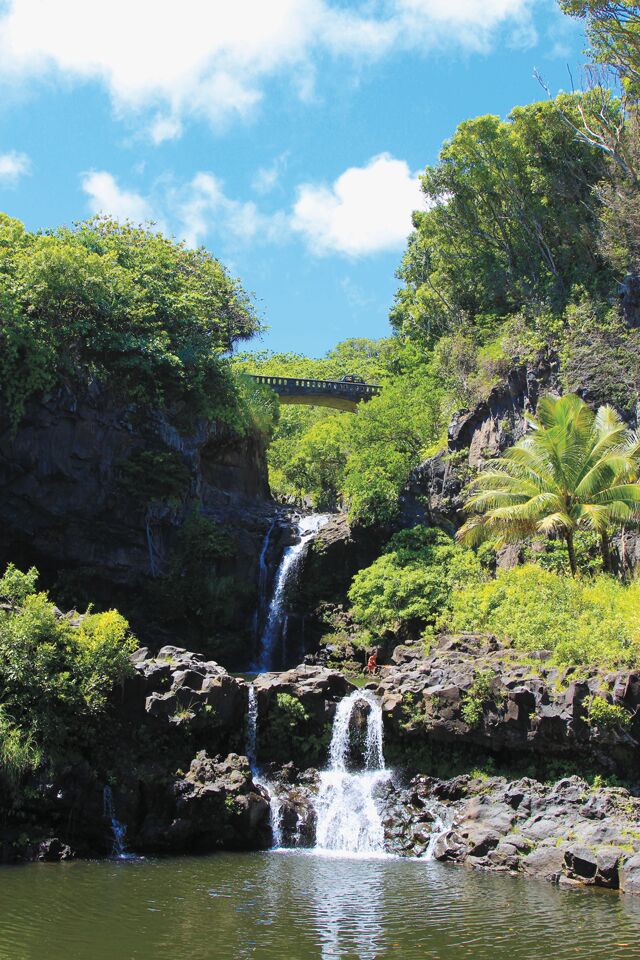 The pools at Oheo Gulch are one of Hana’s top attractions. 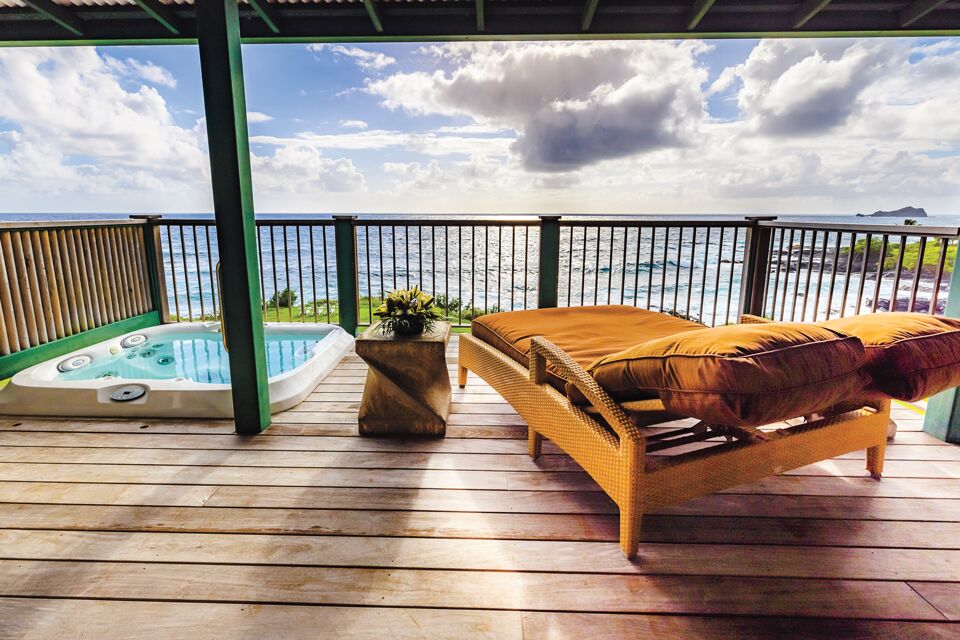 An oceanfront bungalow with a hot tub. 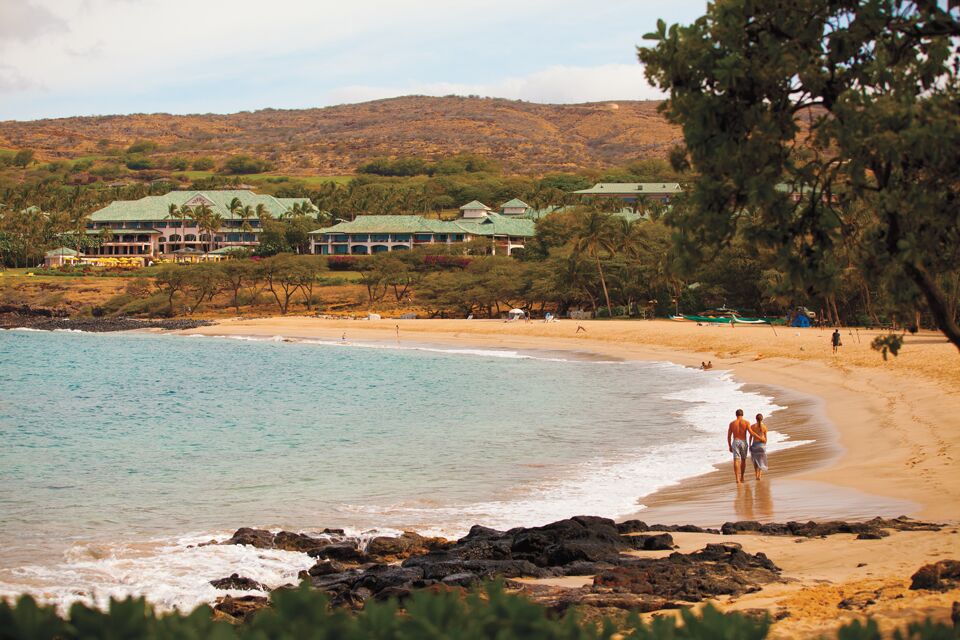 Guests stroll along the beach at the Four Seasons Resort Lanai. 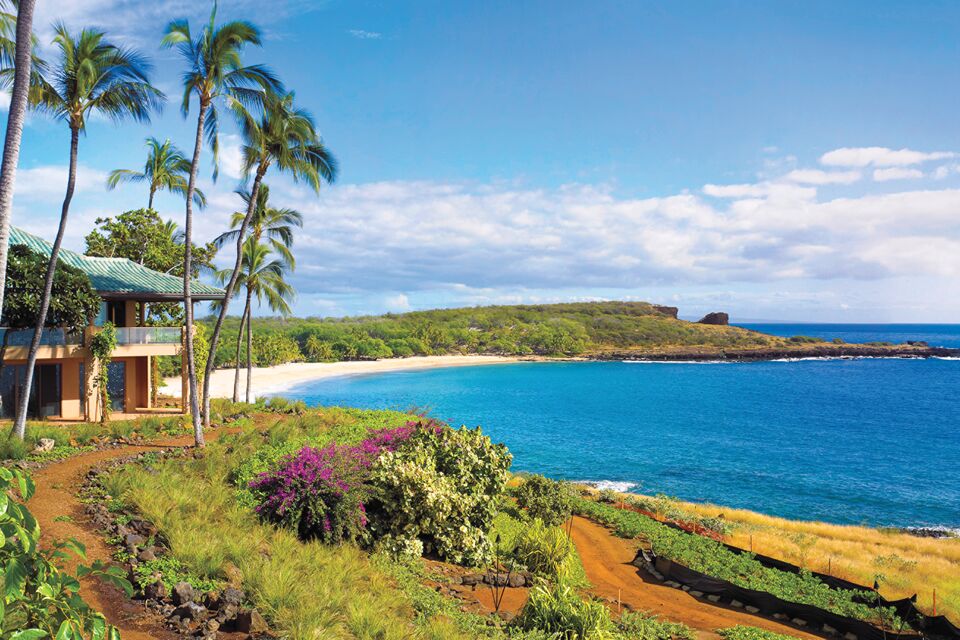 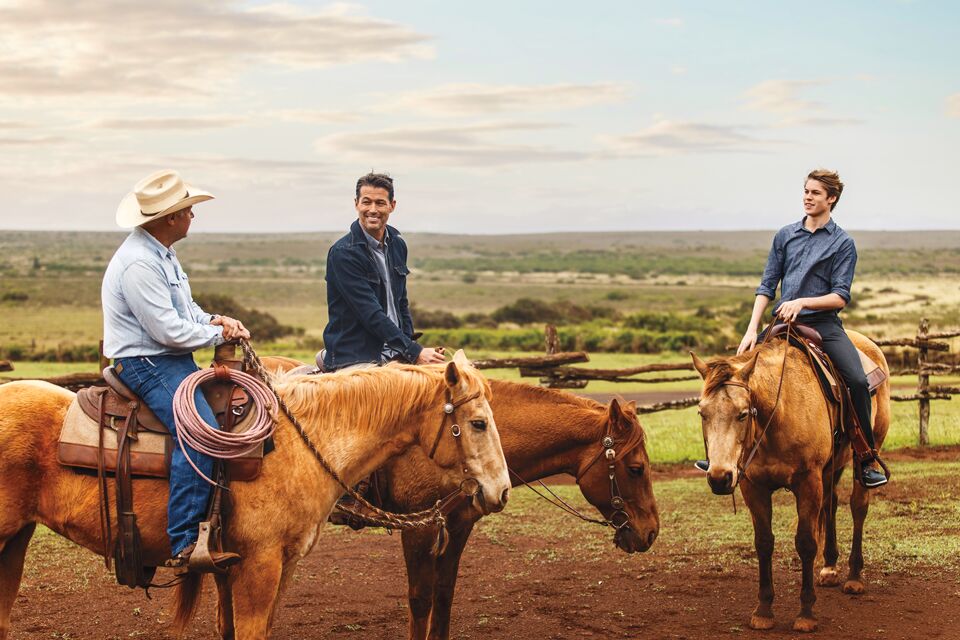 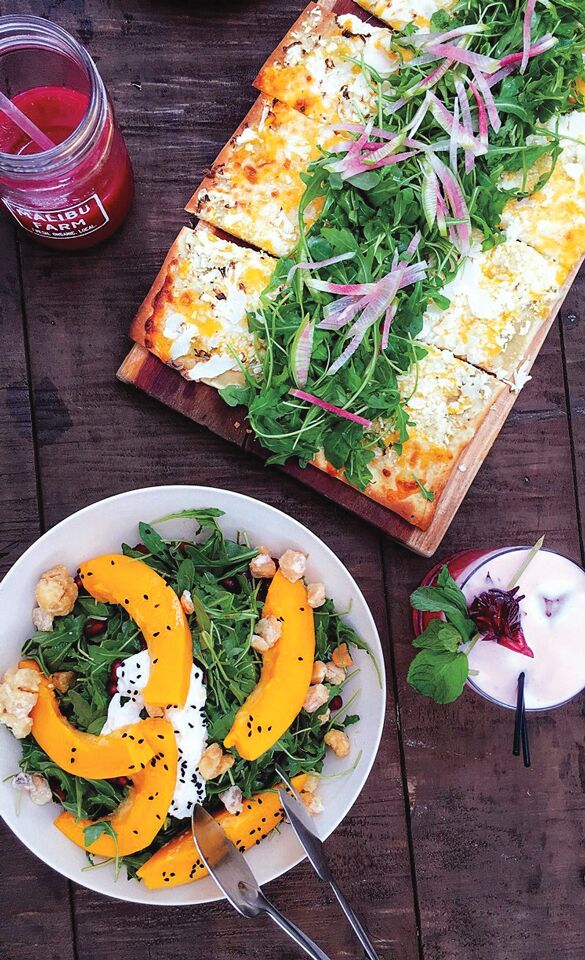 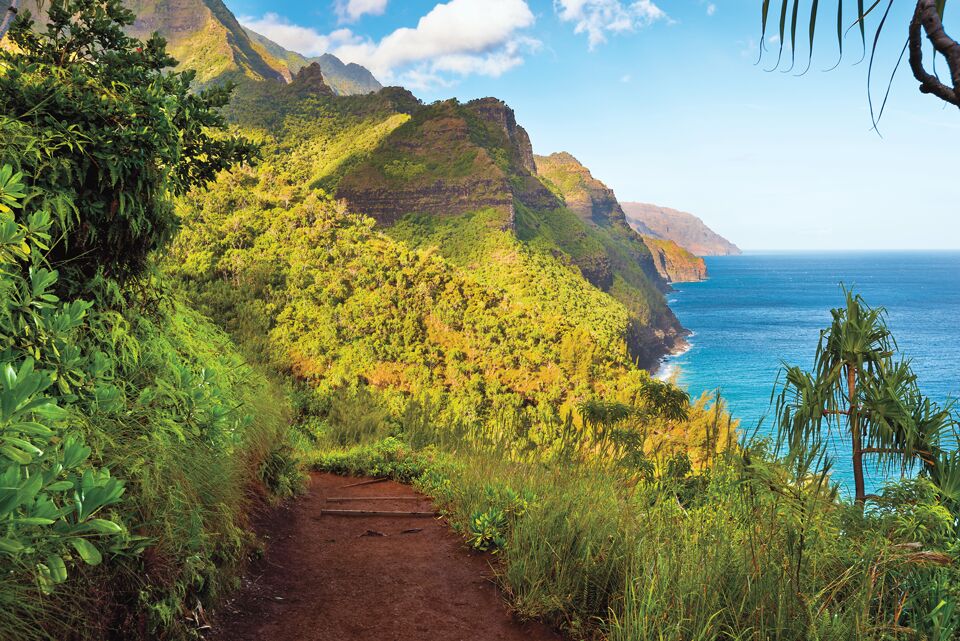 Hike the Kalalau Trail, a not-to-be-missed journey along the coast. 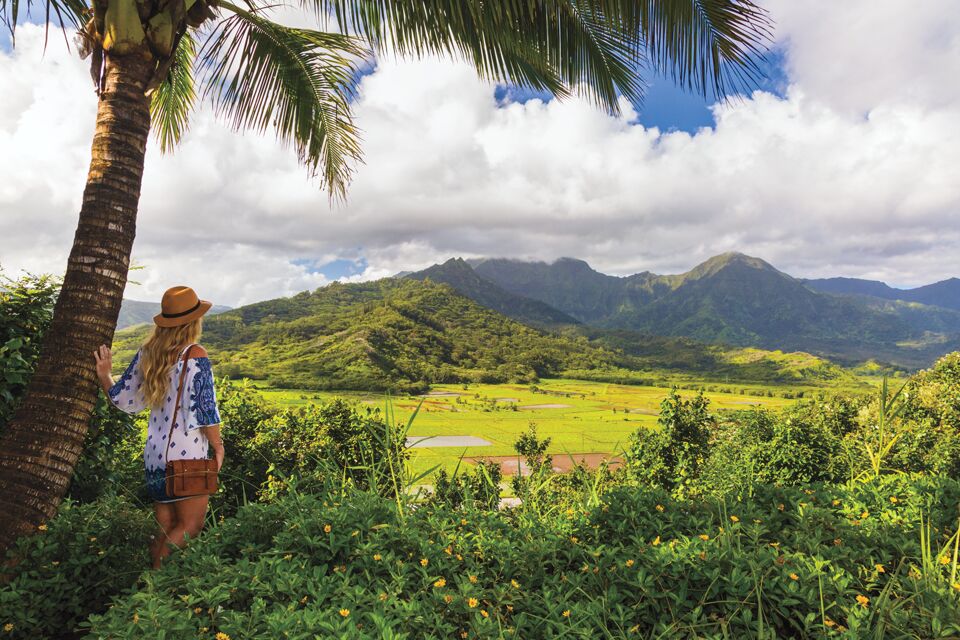 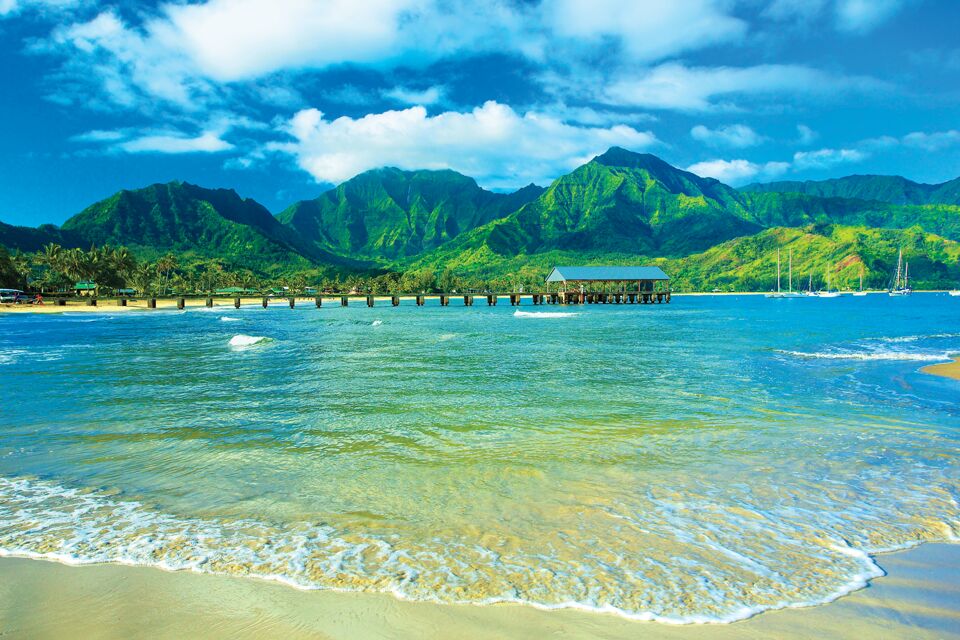 The historic pier at Hanalei Bay. 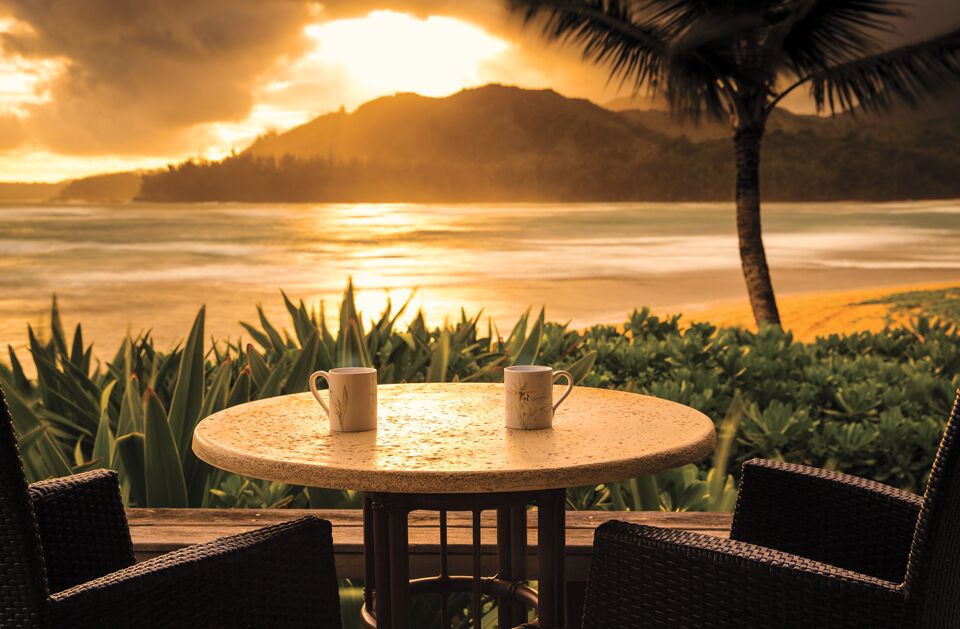 View from the Hanalei Colony Resort.

The Allure of Hana

Hana, the magical  outpost on the eastern edge of  Maui, has long  been a dream destination for  intrepid travelers. It’s an enticing spot, teeming with waterfalls and lush vegetation. Relatively isolated from the rest of Maui, Hana attracts nature lovers, serenity seekers,  and those curious to discover  the traditional ways of the native Hawaiians who’ve made their home here for generations.

Yet for some, Hana’s appeal is as much about the journey to reach it as the place itself. To get to Hana,  visitors—unless they are flying, and more on that in a minute—have to drive the fabled Road to Hana, 64 winding miles along  the island’s north and east shores.  The narrow, often single-lane road is not for the faint of heart; it takes serious driving skills and undivided attention. But this has never stopped travelers who see the Road to Hana as a world-class drive that’s up there with Italy’s Amalfi Coast and our own Pacific Coast Highway.

Hana itself is tiny (population 782), and there’s just one full- service resort, the Hana-Maui, which sits on 66 exquisite acres overlooking the Pacific. Longtime visitors may remember its earlier incarnation, the Travaasa, but it has since been acquired by Hyatt and upgrades are in the works.  One exciting new development is  the Plane to Paradise package, in  which guests can bypass the serpentine road trip and board the resort’s comfy 10-seat Cessna for a quick flight to Hana from Maui’s main airport, Kahului.

After checking into one  of the Hana-Maui’s 75  rooms, suites, or residences, guests can  begin to experience  what Hana is justly  famous for: the sensation of being far away from it all. And with no televisions or clocks in the guestrooms (they can be requested if desired), it’s blissfully easy to unplug.

An ideal day might include a visit to Oheo Gulch, also known as the Seven Sacred Pools, a series of interconnected waterfalls and watering holes, or a stroll along  the famous black sand beach in  nearby Wai‘anapanapa State Park.  Make sure you save time to visit  Haleakala National Park; its southeastern entrance, in the Kipahulu  District, is just a half-hour drive from  the resort. One of the  most popular hikes  here is up Pipiwai Trail to the bamboo  forest, a mystical and  refreshing dream- scape of towering  stalks that rustle and  sway in the breeze.

Those who want to learn about regional  history should stop by the Hana Cultural  Center and Museum  (which has been closed to the public  during the pandemic),  or book a tour with  an experienced guide.  In addition to pointing  out landmarks, like the grave of Charles Lindbergh or the land owned by Oprah Winfrey,  an in-the-know guide can show you where to surf, swim, and even forage.

There are limited options for dining in Hana, but thankfully, you can’t go wrong with any of them. A must-try is the resort’s Hana Ranch Restaurant, one of the few sit-down dining options in town. Working with area growers and providers, Hana Ranch features fresh fish and juicy burgers, steaks, and ribs. Another pleasurable dining experience is at nearby  Hana Farms, where guests can  enjoy delicious wood-fired pizza in a breezy, open-air bamboo hale  (a traditional Hawaiian shelter).

Without many restaurants to speak of, the food-truck trend has taken hold in Hana in a big way. Two of the best are Ae’s Thai  Kitchen and Makai Cafe, where the fresh fish tacos make a supremely satisfying lunch.

And it's this very simplicity—just a handful of places to eat, one  resort, and no nightlife—that makes Hana so special. It’s a world apart and a rare opportunity to see a side of Hawaii unlike any other.

› The Road to Hana features some 600 curves and 59 bridges, with an average drive time of 2.5 hours.

› The mom-and-pop Hasegawa General Store is the commercial hub of Hana, selling a little bit of everything under the sun. Founded in 1910, it is said to be the oldest family-run business on Maui.

Sun, Surf, and Serenity on Lanai

Lanai is Hawaii’s most secluded island, a  perfect escape for travelers who seek a laid-back pace, abundant scenery, and exclusive resort living.

First inhabited by natives one thousand years ago, Lanai is now owned almost entirely by billionaire tech magnate Larry Ellison, who is in the process of transforming the island into a health utopia with wellness resorts and organic hydroponic farming.

Set on the rugged southeastern coast, the Four Seasons Resort  Lanai invites guests to spend their days lounging by lagoon- style pools, strolling through the botanical gardens, reconnecting body and spirit at Hawanawana Spa, and savoring tasty Japanese cuisine at cliffside Nobu Lanai. The resort overlooks the lovely Hulopoe Beach—a sandy crescent—and Manele Bay, known for its pristine coral reefs and pods of spinner dolphins. The resort is imbued with its own unique blend of remoteness and luxury that makes it an ideal hideaway for A-list celebrities and well-to-do travelers.

The resort’s elegantly appointed,  island-inspired rooms are secreted  away in a maze of low-lying buildings surrounded by the lush grounds beautified by koi ponds and waterfalls. Have lunch at the poolside Malibu Farm restaurant, a great way to adjust to Lanai-time.

Looking to explore the island? Choose from activities such as riding horses along quiet trails, visiting the Lanai Culture and Heritage Center, surveying the back roads and cultural sites in a jeep from the resort’s private fleet, or spending time in Lanai City’s historic Dole Park, lined with shops, eateries, and galleries.

Golfers will love the Jack  Nicklaus–designed Manele Golf Course, a dreamy 18-holer with ample tee times and ocean views. Or climb aboard the resort’s 65-foot sailing catamaran, the Lanai II,  for a three-hour snorkeling adventure or two-hour sunset sail. The snorkel sail explores coastal reefs  teeming with brilliantly colored fish and, in the winter months, there’s a good chance of seeing the humpback whales that migrate to the channels between Lanai, Maui, and Molokai.

For an even more exclusive experience, the Sensei Lanai  offers an adults-only, luxurious retreat that  encourages guests to enjoy wellness consultations and classes, spa treatments, lectures, and  island activities, as well as dining at Sensei by Nobu. Golf and  Hulopoe Beach are also big attractions for Sensei guests.

Getting to Lanai is part of  the adventure: Fly directly from Honolulu on Lanai Air, a private charter plane, or Mokulele  Airlines’s small commuter planes from Maui’s main airport in  Kahului. Or reach Lanai by ferry, which runs regularly from the town of Lahaina, on Maui.

› Kaunolu Village, on the southern tip of Lanai, was once a  favorite fishing spot of King Kamehameha, who retreated here after conquering Maui, Molokai, and Lanai. It features the largest surviving ruins of a prehistoric village in Hawaii.

› On Lanai’s southern sea cliffs are the  remains of Halulu Heiau (sacred temple), petroglyphs, and Kahekili’s Leap, where Hawaiian warriors would demonstrate their bravery by diving off a 63-foot cliff.

› Lanai is the  sixth largest of the Hawaiian islands (141 square miles), but only about 3,200 people live here, mostly in the former pineapple plantation town of Lanai City.

The Delights of Kauai's North Shore

The North Shore of Kauai,  the northernmost and  geologically oldest of  the major Hawaiian  islands, boasts one of the most  stunning island settings in the  world. Here you’ll find the  famously lush, rugged cliffs of  the Napali Coast and a shoreline  bursting with wild beauty.

A drive to the North Shore takes  travelers from the airport in Lihue  through Kauai’s funky towns of Kapaa, Wailua, and Hanalei. At the Hanalei Valley Lookout, enjoy  a serene panorama of the Hanalei  Valley and Kauai’s famed taro fields, laid out in a dreamlike patchwork quilt of green.

After crossing the historic  Hanalei Bridge, you start a  meandering route that explores  Kauai’s extraordinary far north shore. Stop to stroll through the quaint Hanalei, a hip surf town with an eclectic mix of structures, such as the Old Hanalei  Schoolhouse and Ching Young  Village. On the way out of town,  the picturesque Wai’oli Hui’ia Church has rugged, waterfall- laced mountains for its backdrop.  Have lunch at favorite spots such as Tahiti Nui, Tropical Taco, or the Hanalei Poke food truck.

Among the must-do adventures in Hanalei: Take a relaxing kayak  tour of the Hanalei River and  Hanalei Bay with Kayak Kauai, or learn to surf with the experts at Hawaiian Surfing Adventures, based in Hanalei.

Continuing north, the coastal  road narrows even more, and a series of one-lane bridges forces you to slow down and absorb the stunning scenery. Just a few miles before the end of the road and the start of the scenic and almost  inaccessible Napali Coast, you  reach the tranquil community  of Ha’ena and the Hanalei  Colony Resort, a place  where time seems to  stand still.

Set on a sandy beach framed by coconut palm trees and backdropped by cliffs, the resort offers a secluded  escape for those seeking to unwind and recharge their internal batteries. The resort’s two-bedroom suites are comfortable and well appointed; many directly overlook the ocean. In fact, there’s no better place on Kauai to take in the hypnotic power of surging ocean waves and trade winds rustling the  coconut fronds. In this rain-soaked part of the island, it’s not uncommon for rainbows to appear and disappear over the misty mountains.

The resort is also ideally situated to provide access to the island’s open-air attractions. Don’t miss  Ha‘ena State Park’s  wet and dry caves;  Tunnels and Ke‘e beaches for snorkeling; and Limahuli Garden and Preserve, which teems with native species in an otherworldly landscape. But no visit is complete without checking out the famed Kalalau Trail,  an 11-mile coastal trek that runs from Ke‘e Beach to Hanakapiai Beach and then on to the Kalalau  Valley. With awe-inspiring views of towering cliffs, waterfalls, and  sea caves, the Kalalau Trail is considered one of the most scenic,  if challenging, hikes in all  the islands (advance reservations  are required for all non-Hawaii  residents).

For dining, the town of Hanalei  has plenty of options, including the highly rated Bar Acuda  and the Hanalei Gourmet. The  Hanalei Colony Resort recently opened the Opakapaka Grill and Bar, offering tasty fresh seafood  as well as other locally sourced dishes.

For a totally immersive experience in an untouched natural paradise—combined with luxe accommodations and innovative dining—a getaway to Kauai’s North Shore is hard to beat.

› Mount Waialeale is considered one of the wettest spots in the world, averaging 450 inches of rain per year.

› By law, no building on Kauai is allowed  to be taller than a  coconut palm tree (four stories).

› More than 60 movies have been filmed on Kauai, including Jurassic Park; Outbreak; Blue Hawaii; Six Days Seven Nights;  The Descendants; and Pirates of the  Caribbean: On Stranger Tides, and TV shows such as Fantasy Island, Gilligan’s Island, and Baywatch.