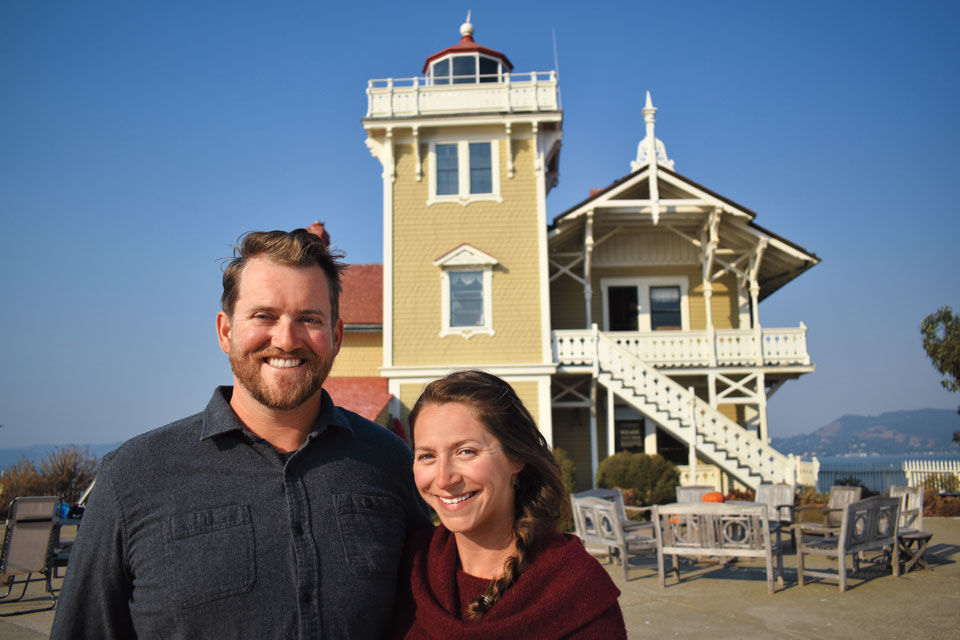 The Bay Area is home to a handful of lighthouses, but only one of them welcomes overnight guests—and serves them a four-course gourmet dinner with wine pairings. Located on a tiny island in San Pablo Bay, just a five-minute boat ride from a remote corner of Richmond, East Brother Light Station (EBLS) is inhabited by exactly two people: Tyler Waterson and Tiffany Danse, a charming couple who beat out thousands of applicants for the coveted job of lighthouse innkeepers. Diablo toured the historic island and its busy bed and breakfast to learn more.

The couple applied for the unique job after seeing a viral BuzzFeed story about it. "Then we found out how many people applied, and we went, Oh, maybe next time," Waterson says. Despite the competition, they made the final cut. When they reported for their interview, Danse brought homemade chocolate truffles. "I bribed them to give me the job," she says with a laugh.

A key qualification for the position is a captain’s license, since the innkeeper also operates the island ferry. "The minimum requirement is 360 logged days at sea," Waterson notes. "I have over 2,000." His experience working on boats—leading tours, teaching sailing, and fishing commercially, often acting as a vessel’s de facto plumber and mechanic—made him a prime candidate. Danse, meanwhile, has a culinary background, but she worked as an occupational therapist before moving into the lighthouse.

Running a B&B is a lot of work—especially when it’s housed in a 146-year-old landmark. Among the roles Waterson, 33, and Danse, 34, fulfill during their 16-hour workdays are: chef, sommelier, housekeeper, dishwasher, shopkeeper, ferry captain, history teacher, maintenance coordinator, reservationist, and water treatment technician. Due to the intense workload, the job only lasts for two years. "We’d like to stay longer," Waterson says. "But we don’t want to get to the point where we’re burned out and not providing the best experience for people. … We want to keep doing a good job."

The couple experienced a power outage during breakfast the first weekend they spent operating the inn. "We were a little bit panicked," admits Waterson, who saved the day by engaging a generator. A week later, they discovered sparrows inside the parlor. "It was hours before guests were supposed to arrive … and we were like, We’ve got to get the birds out!" Danse recalls. Quips Waterson: "One of my unexpected tasks has been bird-catcher."

That’s not to say the whole experience has been challenging. The pair are effusive about the guests they’ve met—including a couple who married on the island 35 years ago—and the island’s natural beauty, from the wildlife (such as blue herons, pelicans, sea lions, and porpoises) to the spectacular views of the Bay, Marin, and San Francisco. "We feel like we’re in Maine in California—living in a Victorian, in a lighthouse," marvels Danse, who, like Waterson, hails from New England. "It’s kind of amazing." ebls.org.

It’s hard to imagine a more unique overnight experience—less than an hour away from home.

Built in 1873, East Brother Light Station is owned by the United States Coast Guard—which manages the main building’s flashing light, as it’s still used to aid navigation—but it’s leased by a nonprofit that oversees its maintenance. The bed and breakfast that Tyler Waterson and Tiffany Danse operate funds 100 percent of the island’s upkeep. Housed primarily in the lighthouse, it’s open four nights a week—Thursday through Sunday—all year long.

What’s included in an overnight stay?

• Boat ride from Point San Pablo to the island.

• Private guest room and access to common areas (including the light tower, which boasts stunning views).

• Homemade breakfast with fresh baked goods and coffee or tea.

• History lesson about the island’s fascinating past and a demonstration of the antique foghorn.

• Boat ride back to the mainland.

• If you choose to stay for a second night, you can purchase lunch (with wine or beer) and indulge in a leisurely day before the gastronomic extravaganza begins all over again.

The property encompasses five guest rooms, each named after its view (San Francisco and Marin are two options). The two largest accommodations, on the lighthouse’s ground floor, share a bathroom; the other three—two upstairs, and one in a separate building—have private en suites. Each room is outfitted with antique furnishings, many of them from the Victorian era.

Guests are also welcome to lounge in the common areas, including the elegant parlor—which features historical photos that "make me feel like they were probably making gin in the bathtub here during Prohibition," Danse says with a laugh—and the game room, which contains more than a dozen vintage and contemporary board and card games for guests to play.

What kind of food is offered?

Danse conceives all the menus, and visitors tend to be delighted by her inspired fare. "I think we pleasantly surprise people," she says. "When we bring out a soup, for example, it’s got a balsamic reduction and a rosemary parm crisp on the side, and they’re like, Wow—I thought we’d just have tomato soup!"

Dinner and breakfast each consist of a set menu (although Danse can accommodate dietary restrictions upon request). While the dishes change daily, a typical dinner could include:

Wines come from Field Recordings winery in Paso Robles. Beer is brewed at the Richmond-based East Brother Beer Company (naturally), and coffee is a special roast created just for the light station by Richmond’s Catahoula Coffee. Some of the produce served in the meals comes directly from the island’s garden.

What else do guests need to know?

Due to the age of the light station and its remote island location, it lacks a few modern conveniences. Visitors should be aware of these quirks:

• If you only stay one night, you don’t get a shower, due to water-conservation efforts. "We catch our water; it’s all rainwater," Waterson explains, adding that it’s run through a UV sterilizer. "We don’t have any freshwater plumbing from the shore."

• Guests have no access to television or Wi-Fi. (However, the couple notes, cellular data generally works fine—and many visitors actually enjoy unplugging.)

• Guests have to climb a ladder to get onto the island from the boat. (The ladder is brand-new, as Waterson recently upgraded it.)

• The boat is open, so if it’s raining during your ferry ride, you will get wet. (That said, it’s only a five-minute trip.) "A lot of people actually ask if they can come for a stormy night," Waterson notes. "It would be kind of romantic."

How do I book?

Visit ebls.org to reserve a room or contact the innkeepers. Here are some tips:

• Because the bed and breakfast is extremely busy—"We set a record in June for the best month ever," Waterson says—prospective guests should try to book well in advance.

• You can rent the entire island for events, including weddings, family reunions, and other private parties. The cost? $1,955 per night for all five rooms, and Danse will customize the food menus to your tastes.

• The innkeepers can arrange special extras, such as fresh flowers or champagne waiting in your room.