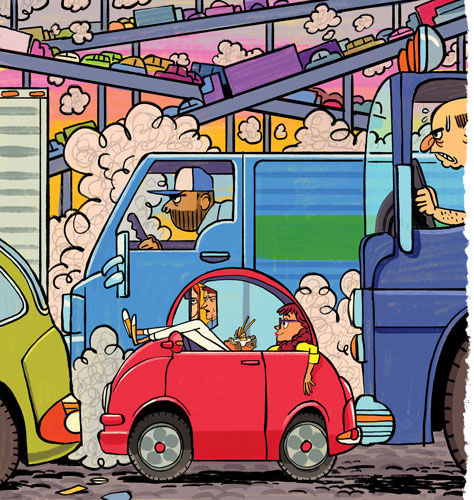 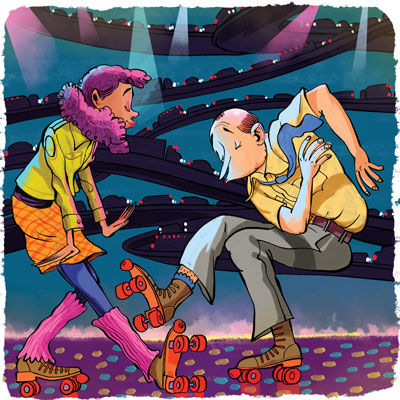 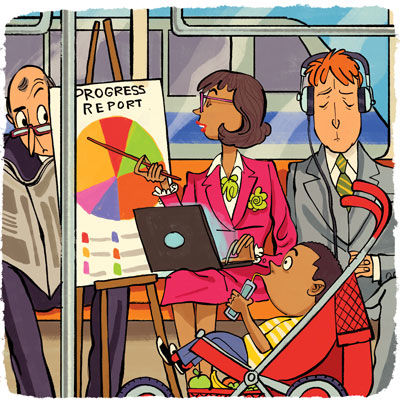 Is there anyone who truly enjoys commuting? The endless braking of the cars in front of you. The rising temperature of a packed BART train. The gamble of a casual carpool. With population on the rise and notably low unemployment, more people in the East Bay are testing the transportation infrastructure while getting to work.

According to the Metropolitan Transportation Commission, the amount of time people spent in traffic in the Bay Area increased 65 percent between 2000 and 2017. Not only is sitting in traffic frustrating, but several studies suggest that long-distance commuters suffer headaches, backaches, high blood pressure, and fatigue at a higher rate than those with short trips to work.

Go Off the Gridlock

When the freeway is at a standstill, a city-street detour might be faster—but it can get jammed too. Take a break with a comforting meal or a calming activity at these easy-access spots.

TOAST OF THE TOWN: Parchments, a Livermore coffee shop operated by Cornerstone Fellowship, often offers 14 varieties of the popular avocado toast to morning commuters, including avocado and egg sprinkled with olive oil and pepper flakes for $6.

BIRD’S-EYE VIEW: Get above the traffic at Dublin Hills Regional Park, which features a stunning vantage of 580 and much of the Tri-Valley from 1,138-foot Donlon Point—less than a one-mile hike from the staging area.

TACO TIME: Slip out of a bottleneck and grab a quick snack at Puesto in the Veranda shopping center in Concord. Ten types of tacos (including duck, filet mignon, and peas) and three variations on guacamole will fuel you up.

SILVER SCREEN: If you need to kill some time to let an evening traffic snarl clear, get lost in a movie without stepping out of your vehicle at Concord’s West Wind Solano Drive-In theater. The throwback venue has a retro vibe with modern touches, such as digital projection and audio on your car radio’s FM dial.

WALK IT OFF: The late-setting summer sun means that the Lafayette Reservoir is open for longer hours, so exit off the highway for an easy, energy-boosting walk around the 2.7-mile Lakeside Nature Trail loop.

TO-GO GRUB: Try a delicious (and transportable) grain bowl at Homegrown in Danville. Order ahead, then pull over for a fried egg–topped Sunrise Bowl.

DO LAPS: Burn off the lingering tension of that afternoon meeting with retro cardio at the Golden Skate in San Ramon (open roller-skating sessions Wednesday and Friday evenings) or Iceland in Dublin (for nightly ice skating).

Easy In, Easy Out

Because multitasking is key in our busy world, check out these local drive-throughs where you can eat, shop, and accomplish items on your to-do list without ever leaving your car.

Doughnuts: When you’re in need of a sweet morning treat, there are two drive-through options in Concord. Krispy Kreme, just off 680, tempts with its glazed confections. Deeper into the city, Clayton Road commuters can visit Dunkin’ (formerly known as Dunkin’ Donuts).

Ice cream: For an evening splurge plus groceries, head to Pleasanton’s Meadowlark Dairy, which brings soft-serve cones and slushies—as well as milk, eggs, bread, and pantry staples—to your car window.

Vegetarian eats: Commuters to the North Bay, take note that Amy’s Drive-Thru in Rohnert Park serves organic vegetarian burgers, pizza, and burritos. (Plans are in the works to open an Amy’s in Walnut Creek—stay tuned.)

Independent: Get your coconut-orange iced coffee, house-made Pop Tarts, and other Coffee Shop favorites at its drive-through location in Alamo.

Chain: Starbucks operates several local drive-through stores. The most notable are Livermore’s Airway Boulevard location, which is open nearly 24 hours (3 a.m. until midnight on weekdays), and Pleasanton’s Santa Rita Road spot, which is drive-through only and operates out of a refurbished shipping container.

Pharmacy: If your insurance allows, send your next prescription to a CVS or Rite Aid pharmacy with a drive-through pickup window.

Shots: Check now to find out the next dates for Kaiser Permanente’s drive-through flu-shot clinics—yes, you literally hold your arm out the car window—hosted annually in the fall at medical centers in Fremont, Union City, and San Leandro.

Grocery shopping: Safeway, Lucky, and Target stores all offer parking lot pickup. Order ahead, pay online, park in the designated spot, and your bagged groceries will be delivered directly to your car.

Car service: At Oil Changers locations throughout the East Bay, not only does an oil change take a quick 15 minutes, but you don’t even need to get out of your vehicle. The mechanic will also check your car’s battery, tires, fluids, and filters.

Before delivering traffic reports on KQED radio from noon to 7 p.m., Julie Deppish makes her own commute from Pleasanton to San Francisco in a stick-shift Mini Cooper. The off-rush departure means it takes only 50 minutes on a good day. Going home, it can take her 30 minutes just to get to the lower deck of the Bay Bridge—a distance of two blocks.

Since she started focusing on traffic in 2012—she was previously a DJ and music director at KKIQ and KOIT—Deppish has seen Bay Area roads get more and more congested. There are recurring themes, such as the 2 p.m. slowdown on the Sunol Grade and an endless parade of ladders in the road. But strange stuff happens, too: The day before this interview, a truck caught fire on the Altamont Pass, torching a load of salami and bacon and snarling 580 for half a day. But no matter the problem, Deppish believes a human traffic reporter will always beat navigation apps.

"Every day there’s something major," she says. "We have a lot more information—Google Maps plus CHP, traffic cameras, callers—and we can filter what is important and what is not."

To limit surprises, check the status of your commute before leaving the house. But even traffic reporters get stuck: "If I get to San Leandro, and all of a sudden there’s an accident on the Bay Bridge, there’s nothing I can do. It’s too late to take the San Mateo Bridge," says Deppish, who listens to KCBS while driving.

With more companies offering work-from-home days, many people take Fridays off, and Thursday has become the worst commute day. If you can, work remotely or take BART on Thursdays.

Attention, off-peak commuters: After 10 a.m. on the Bay Bridge, anyone can use the high-occupancy vehicle lanes. Deppish says she nearly always sees jammed FasTrak lanes while she cruises through in carpool.

There are myriad ways to pass time behind the wheel or sitting on BART—streaming an album or audiobook, catching up on the phone with a friend, or practicing the presentation for your 11 a.m. meeting—but podcasts are our favorite. Here are some great ones with East Bay ties.

This KQED podcast addresses listeners’ burning questions about the Bay Area, such as: What is the origin of hella? And: How did our infamous fog come to be named Karl? Host Olivia Allen-Price offers answers in themed weekly 10-minute episodes.

Admirers of the Port of Oakland cranes, this eight-part audio documentary is for you. In 30-minute episodes, host Alexis Madrigal explores the rise of container shipping and its effect on economics and cities. You’ll meet sailors spending their shore day in an East Bay Target and ride to the top of one of the aforementioned cranes.

Jorma Taccone, a Berkeley-raised Saturday Night Live alum and member of The Lonely Island comedy trio, recently launched a podcast that is great for the drive to school. The two-minute episodes start off with classic storytelling and get derailed by gruff-voiced Derrick. The moral is never quite what you expect.

At Mortified Live—a monthly event in Oakland, in addition to other locations—adults share embarrassing childhood artifacts and the stories behind them. The biweekly, 30-minute podcast scores you a "seat" at all shows, plus extra content like conversations with special guests (including Elijah Wood and Alanis Morissette) and backstage interviews.

With this podcast by Billy Jensen (who helped complete the book I’ll Be Gone in the Dark) and Paul Holes (the retired Contra Costa investigator who aided in identifying the Golden State Killer), true crime fans can become citizen detectives. One solved and one unsolved case are presented, and listeners are encouraged to share their insights.

Produced in Oakland and hosted by Glynn Washington, Snap Judgment is an hour-long weekly podcast that layers narrative pieces with original music. Since it launched in 2010, the show has produced over 1,000 episodes, featuring topics as disparate as underwater cave exploration and learning an ex may be a murderer.

Take a deep dive into things you’ve never really noticed before—like the architecture of an airport or the design of the stethoscope. Creator and host Roman Mars began producing 99% Invisible in his Oakland bedroom in 2010; today, a team of 11 staffs its headquarters downtown. New 15- to 20-minute episodes are posted weekly.

Here’s how the commute adds up.

Time when afternoon rush-hour traffic from San Francisco to the East Bay begins on weekdays. It continues through 8:30 p.m.

Ratio of Bay Area workers who have jobs in the same county in which they live. In Contra Costa, 4 in 10 residents commute to neighboring counties for work.

Time the Antioch BART station parking lot fills on weekday mornings—the earliest in the East Bay. Most stations fill up between 7 and 8 a.m., but the North Concord/Martinez lot rarely hits capacity.

The San Francisco metropolitan area’s rank in number of "super-commuters"— or people who travel more than 90 minutes to reach work—in the U.S. There are more than 104,400 here.

Minutes saved by taking the Altamont Commuter Express train (ACE) from Pleasanton to San Jose, instead of driving. It even has tables and Wi-Fi.

Number of new BART railcars currently being added to the system—designed to increase capacity, reduce noise, and improve reliability. As of May 1, BART planned to have at least one new train on each of the five lines of service.

Year the 680 South express lane extension will open, connecting Martinez to the Alameda County border in a continuous 23-mile stretch.

Hours that commuters taking 80 from San Francisco to the East Bay lose in a year.

Number of people, on average, who commute on BART each workday.

Regular ferry service begins on the Bay between Oakland and San Francisco.

The San Francisco–Oakland Bay Bridge opens, originally carrying cars on the upper deck and trucks and commuter trains on the lower.

The Caldecott Tunnel opens as a two-bore tunnel through the Berkeley hills between Oakland and Orinda.

The War Assets Administration returns the Concord Army Air Base to Contra Costa County, which renames it Buchanan Field Airport.

The Caldecott Tunnel opens its third bore. For decades afterward, the middle tunnel changes direction depending on traffic patterns.

The 6.9 Loma Prieta earthquake damages the upper deck of the Bay Bridge and topples the Cypress Street Viaduct on 880.

Ferry service from Alameda and Oakland to San Francisco resumes after the earthquake. It had been discontinued in 1958, due to dwindling use.

The Carquinez Bridge, from Crockett to Vallejo, becomes the first California toll bridge to use FasTrak.

A new eastern span of the Bay Bridge opens, making it the widest bridge in the world. A new bike path also connects cyclists between Oakland and Treasure Island.